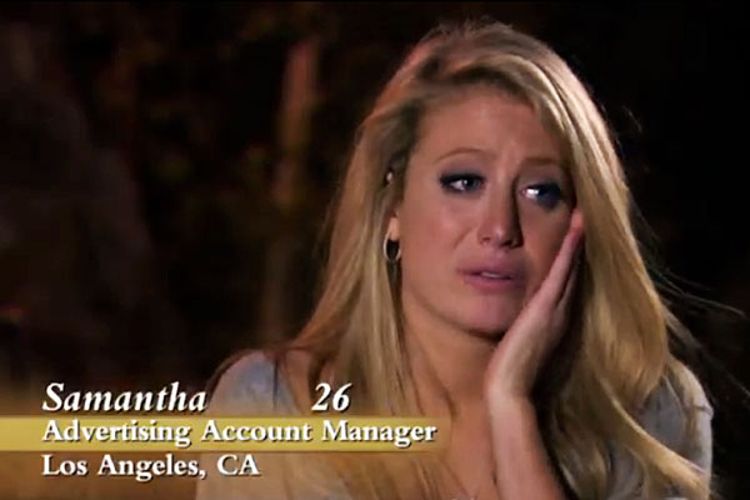 If you’re a true Bachelor fanatic — and let’s be real here, you are, and you’re rightfully ashamed of that fact, except you’re not, the show is amazing — there’s a pretty good chance you’re already acquainted with the sublime Tumblr Forever Alone: Faces of Rejected Bachelorettes, the Internet’s leading repository of screenshots of the rose-bereft. If not, you owe it to yourself to spend a few minutes scrolling down its seemingly bottomless gallery of abject misery, which preserves for all time the worst moments of some misguided, love-craving twentysomethings’ lives, at least until they suffer an actual tragedy away from TV cameras, an open bar, and a rented mansion populated by homicidal sorority sisters.

We’re not sure why we’re choosing this moment to highlight the site, except that Samantha’s paroxysm of postrejection anguish seemed notably poignant; maybe it was the fact that her attempt to seize control of her fate by threatening Ben to give her a one-on-one date or else resulted in him immediately or else-ing her right into the Limo of Oblivion came off as particularly unhinged given her lack of screen time thus far. (High five, editors!)  It’s as if Ben — no one’s idea of an alpha male, unless your idea of an alpha male involves two hours per day of alpha-spray-tanning and alpha-blow-outs — was trying to remind his suddenly roiling harem that the crucial part of a kamikaze mission is the spectacular explosion at the end. We bet Casey S. will think twice before dive-bombing her plane toward the deck of the USS Flajnik.

Filed Under: Ben Flajnik, The Bachelor