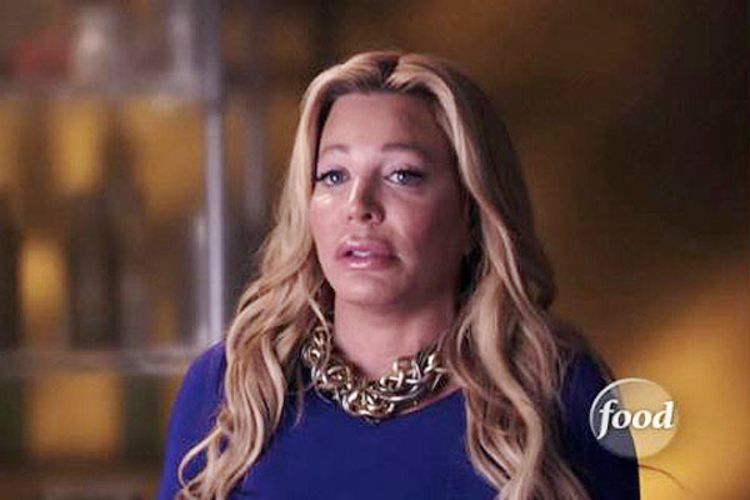 It’s the episode we’ve not been waiting for; the remaining cast of Rachael vs. Guy: Celebrity Cook-Off tackle the sinister and mysterious food truck craze, if you define a “craze” as just a “thing that has comfortably and unexcitedly just gone on existing for what seems like over half a decade now.” This episode was almost so legit that I had to quit, you know? I hate throwing around the word “authentic,” but everything about this lunch cart challenge was très, très authentic. Is there anything cooler than eating food served to you by a guy in a truck?  Maybe Terry Richardson riding on the back of Justin Theroux’s motorcycle during Fashion Week and photographing you while you eat a doughnut off his erect penis, maybe that is slightly cooler. But it’s close.

I live in New York, a city now teeming with food trucks, and I understand the appeal, both to the proprietors and to customers. Setting up and maintaining a brick-and-mortar restaurant location is both difficult and expensive, and a mobile location allows you to serve a niche food (like, Korean tacos or dinges) to a niche audience (white people who work for Viacom) at a set time (three hours for lunch every Monday and Wednesday). And customers get to try occasionally interesting food, food that tastes even better paired with the satisfaction that it was served to them out of the car from Ghostbusters 2 whose location was revealed to them via a whimsical Twitter feed.

But no one would really care about food trucks if the food weren’t something worth traveling for. Would you seek out a lunch cart if it were serving mediocre wraps? Rachael vs. Guy valiantly aims to answer that question. Personally, I would not eat a wrap at a food cart. There are plenty of restaurants with working bathrooms and sneeze guards serving wraps not prepared by somebody’s bassist with open sores on his face and arms. Also, in general, I try to avoid wraps, unless they are Buffalo chicken wraps. Buffalo chicken wraps are my Achilles’ heel. (You’ll remember in The Iliad when Achilles keeps ordering a heel for lunch when he’s by himself even though it’s always disappointing and gross.)

Team Guy and Team Rachael are given 90 minutes to prep for a food truck lunch service. The teams must prepare something from each of the three food groups: stick, bun, and wrap. Those things sound very appetizing. Team Guy is at a disadvantage, because with Cheech’s elimination, they are down to only Coolio and Joey, leaving the two of them responsible for three dishes. They agree to split the stick. Rachael advises her team to try cooking along the theme of “Hot Day in the City.” I’m kidding; she does not suggest that. But I will never tire of a Hot Day in the City.

What Rachael does suggest is “Sloppy Sliders,” or alternately “Sloppies.” “Guys, one word: Sloppies.” That is very unappealing, especially coming out of her mouth, but there was no call for her to repeat it as many times as she did. “I think what these hungry lunch-breakers are gonna be craving is some hot Sloppies, for sure. You put some Sloppies on the Sloppies’ buns, and say here you go, here are Sloppies.” It’s basically a Sloppy Joe on a small hamburger roll, but Lou Diamond Phillips decides to “Shit It Up a Notch” by making it with ground turkey. Disgusting. We can all agree that ground turkey is mostly gross. Yes, it’s a little healthier, but so is pureed balsa wood soaked in chicken broth, and you should not be making Sloppies out of that, either. Great, now I am saying Sloppies. “Sloppies” sounds like what should be written on the side of the trash can you throw FULL diapers into. “Hon, do you know if the town still recycles Sloppies, or do we just put them in the regular trash?”

Everybody toils away on their clown-food while the clock ticks down. While Phillips perfects his Sloppies, Taylor Dayne makes teriyaki beef skewers with homemade teriyaki sauce. Her recipe for teriyaki sauce is soy sauce. The flavors are very delicate. Also, she has never grilled before, and the extent of her grilling knowledge is touching the skewers with her fingers and having a shit-ton of face surgery. Rachael talks Summer out of making salad wraps and instead steers her toward sausage, which in some cultures is called a Salad of Pigs. Did you know pigs are able to make their own dressing? They call it Brown Goddess Dressing. You don’t even have to shake it up. Guy likes it “right from the tap.”

Things are less organized over on Fieri’s side. Coolio is making Soul Rolls, which are egg rolls made with cheese. They sound strange, but hey, don’t knock it till you barf it. Joey’s working on meatball sliders, because of his heritage, but that leaves them needing a third dish. Guy instructs them on how to make bacon-wrapped shrimp skewers with homemade BBQ sauce, but it’s a little unclear when they will get time to do it. Coolio will be of no assistance. He really loses his Coolio (boom!) on this challenge. Despite repeated pleas by Fatone to help out with the shrimp, Coolio is scrambling to get the egg rolls together. He putters around making two separate BBQ sauces and moaning about the heat of his oil, while guests line up feet away. With time almost gone, he’s got about five egg rolls made. Joey attempts to rally Coolio and the crowd with a megaphone, and that helps Coolio calm down. He says he was nervous, but Joey helps because “he can handle stressful situations.” What in the world makes Coolio think Joey Fatone is particularly suited to stressful situations? “I remember when Joey was on those marionette strings in the ‘Bye, Bye, Bye’ video, and being a puppet on a stage would really stress me out, but Joey was totally able to handle it.” That is something Coolio maybe said.

The herds of annoying TV diners swarm the two trucks and start eating free food. (Can a herd swarm? This one can.) Most of Dayne’s skewers are cooked poorly, and Summer’s sausage wraps have no flavor. Everybody loves the Sloppies. “I need another Sloppy Slider, please!” I am puzzled as to where they gathered up all these goobers to eat the food and give their opinions on camera “naturally.” They all yell in a strange monotone. Watching them feels like being at a publicist job fair with an open bar. Surprisingly, people go crazy for Coolio’s Soul Roll. Cheese on an egg roll: Who knew? Coolio knew.

The votes are tallied, and Coolio and Joey are able to overcome their teammate deficit and take the win. It is suspicious how evenly matched the challenges have kept the teams. Had Coolio or Joey gone home, the teams would be 3-to-1 and I can’t imagine how next week would work. But far be it for me to suggest that anything about this reality show is not perfect. Everything about this reality show is perfect. Summer and Taylor, with the two least successful dishes, must face off against one another in a blind taste test.

In order, the three elimination challenges so far had been increasingly idiotic: shrimp, salad, and grilled cheese. I half expected last night’s challenge to be something like “HOT BOWL OF SALT.” “For this challenge, you must give us a hot bowl of salt and then we’ll lick our fingers and taste the salt and see how salty and hot it is. The bowl with the hottest and saltiest salt wins!” Instead, the challenge is to make an amuse-bouche, a phrase that confuses both Taylor and Summer. Guy attempts to explain it, but they walk away hearing “tiny appetizer” in their heads. They both make little fig-and-cheese things that don’t look good. One’s a tart, one’s on toast, and there may be jam involved. I wouldn’t want either one. Dayne uses truffle oil, which she calls her “passion of all passions.” Wow. And it shows, as her dish gets the win.

Summer, the last remaining normal contestant, is sent home. You can sense her disappointment, but she is anything but a sore loser. She says, “Coming into this competition, I’d say I was a good cook. But now, going home and having been eliminated, I’m gonna say I’m a really good cook.” OK. That’s kind of the opposite message you should take from being sent home ahead of Lou Diamond Phillips and Coolio, but I think America really appreciates your positivity.

Next week on Rachael vs. Guy, the hosts and the contestants gargle molten hot Canola oil until they die!

Max Silvestri is a comedian and a writer based in New York. Follow him on Twitter, where he mostly talks about food.