That’s the Song Kanye West Likes: Yeezy, Chief Keef, and the Art of the Backhanded Cosign 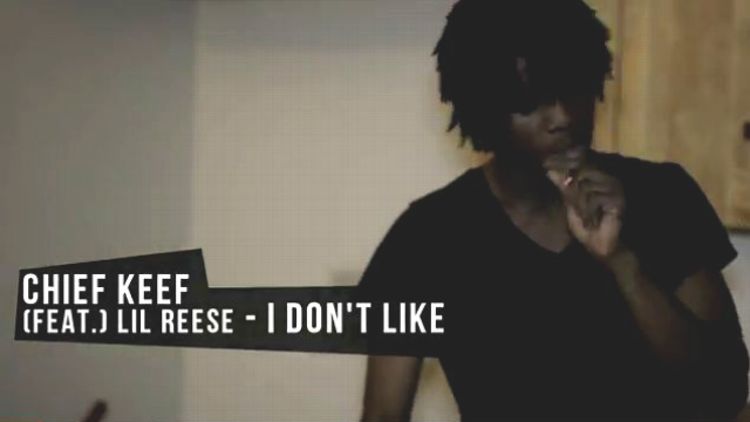 A question on the occasion of the 13th or 14th time I’ve listened to Chief Keef’s “I Don’t Like (Remix)” today: Is anybody better at co-optation through collaboration than Kanye West?

Chief Keef is a previously superunknown, dreadlocked 16-year-old rapper from Chicago’s South Side. Earlier this year, he became a viral fascination after a video of a very, very excited young man in a wood-paneled rec room celebrating Keef’s release from jail on weapons charges became a hit on Worldstarhiphop.com. Keef was big among local high school kids, but he seemed to have no connections whatsoever, even on the regional level; in a hip-hop moment where even upstart blog-rap types like A$AP Rocky seem to arrive pre-assimilated, with label/media/fashion cosigns in place, that appearance of total aesthetic purity goes a long way. So did the detail that Keef has managed to blow up despite still being under house arrest at his grandmother’s home, which is also the kind of hook that gets the attention of editors at outlets not normally known for commissioning long-form profiles of newish rappers (call it the Earl Sweatshirt Exemption).

The person who discovered Mark Frechette, the Boston commune dweller and non-actor who ended up playing the doomed college radical in Michelangelo Antonioni’s 1970 film Zabriskie Point, is said to have sold Frechette to Antonioni by saying, simply and excitedly, “He’s 20 and he hates!” Minus four years, that’s Chief Keef on “I Don’t Like,” his best single to date and this year’s best punk song, a litany of objections so sneeringly and triumphantly resentful that I want to travel back in time and kick a hole in the Sheetrock of my childhood bedroom whenever it comes on. Maybe it’s because he’s 16, but you can totally believe Keef doesn’t like the shit he doesn’t like as much as he claims not to, and that, like Frechette’s character, he’s willing to die, but not of boredom. (Frechette kept it pretty trill to the end: Eventually he robbed a bank while allegedly tripping on LSD and died in a prison weight-room accident in 1975.)

The chilly anti-charisma-charisma magnetism of Keef’s delivery (as showcased on Web hits like “Bang” and “3Hunna” and his pretty-extraordinary mixtape Back From the Dead) suggests that he’s the kind of out-of-nowhere-phenom rapper who’ll probably actually go places once he’s able to, y’know, go places. It probably won’t hurt, as things progress, that Keef is a good-looking dude whose videos, which sometimes feature Keef and various Keef associates shirtlessly mean-mugging in small apartments, have that Larry Clark–wishes-he-were-up-on-this quality that the first few milliseconds of the Odd Future thing had.

But on May 2, after much all-caps social-media pump-priming, Kanye West — who’s lately been back to ramping up his G.O.O.D. Fridays leak initiative — released a remix of “I Don’t Like” featuring verses by West, Pusha T, Jadakiss, and Big Sean along with Keef, who recorded his contribution on a laptop, live from house arrest. Judging by this video, and specifically the plastic on the lamp visible around 1:45, he’s still at his grandmother’s place. Young Chop, the producer of the original, is in that video, too; he’s the guy who gets asked what his role in all this is, and answers, enigmatically, that his job is to be “that dude.” Young Chop got on the phone to a Chicago hip-hop radio DJ minutes after the song dropped, complaining that Kanye had messed with his beat without calling him to get permission — there are a few more twists and turns rhythmically, and the sound is denser, although the bent slasher-movie keyboard part that makes the original so skull-drillingly memorable is still the lead instrument. “These motherfuckers is playin’ me and I don’t give two fucks,” Chop declared. “I will sue the shit out of Kanye West.”

Chop subsequently got his phone call and publicly recanted. But he has a point: Part of the reason the “I Don’t Like” remix is so thrilling is that it feels so audaciously land-grabby. It’s a joyride in a hot car. It’s Kanye elbowing his way into the novelty-hit space in which established artists don’t get to operate. It’s Kanye jumping on a moment and determining that the one thing it was missing was him, which is a very Kanye thing to do. Kanye’s on a tear right now, for whatever reason — Kim Kardashian? Manic episode? Supermoon? It’s unclear — and he’s in prime outraged/outrageous form on this, touching on platform Kanye issues like the vampire media and Michael Jackson and avowing that women who merely make out with each other instead of using strap-ons “ain’t about that life.” Somewhere between Pusha T rhyming “Soho, Tribeca” with “three hoes, trifecta” and Jadakiss invoking jean jackets with the sleeves cut off as the ultimate scary-dude fashion statement — between contributions from two name rappers with huge, distinctive, pungent voices, in other words — there’s also a new Chief Keef verse, but it gets a little swamped. “I come up on the scene and I’m stealin’ light,” he says; in context, it’s sort of ironic.

I started thinking about Kanye’s cool-hunting tendencies last year, when I wrote about Lex Luger (whose pummeling signature sound is a huge and obvious influence on both versions of “I Don’t Like”) for another place. At some point during the two days I spent herniating in a studio swivel chair in a fog bank of secondhand blunt smoke (reporting!), Luger played me one of the original tracks he’d played for Kanye when West summoned him to New York during the My Beautiful Dark Twisted Fantasy sessions. It was this little all-digital thing — a rhythm, a feel, not exactly a song — that Kanye turned around, added a “Carmina Burana” choir and strings and some guitar and general Wagnerian grandeur to, and eventually released, with himself and Jay-Z rapping over it, as the IMAX-size fuck-y’all “H.A.M.,” from Watch the Throne.

As great as that song was as a song, it was a greater positional statement: By buying a rising Virginia producer’s beat and then tricking it out like the Sistine Helicarrier, Kanye was borrowing a little of Lex’s insurgent young-gun swag and his basically-unrivaled-at-that-moment Southern trap-sound credibility while simultaneously putting a competing producer in his place. All that live instrumentation felt like the work of a man going extra widescreen on the arrangement to emphasize the difference between a producer and a mere beat maker. Classic underminer behavior.

You could argue, I guess, that Kanye’s history of refashioning regional sounds in his own image goes back to his (less overtly grandstanding-ish) use of frequent T.I. collaborator DJ Toomp on “Can’t Tell Me Nothing.” And maybe he learned it from Jay-Z, whose use of U.G.K. on “Big Pimpin'” way back in 2000 ultimately did more to advertise Jay’s good taste than it did for U.G.K.’s profile. Chief Keef is obviously from Kanye’s hometown, not the South, but he has that same outside-the-system, without-portfolio quality, at least right now. In his “I Don’t Like” verse, Kanye shouts out a bunch of other local Chicago rappers — Bump J, the L.E.P. Bogus Boys, and King Louie — and then throws Keef himself into that litany, along with Derrick Rose, so maybe this is just about Chi-Town pride and I’m overthinking it. And I guess it’s possible that both “H.A.M.” and “I Don’t Like (Remix)” happened in a more organic, jump-in-the-booth way than I’m imagining — that this is just the shit Kanye likes. But to buy that, you’d have to believe that Kanye is capable of doing anything, even placing a room-service order, without thinking about how it’s going to be perceived.

Hollywood Prospectus Podcast: The Beastie Boys, The Avengers, Your Sunday Shows, and More