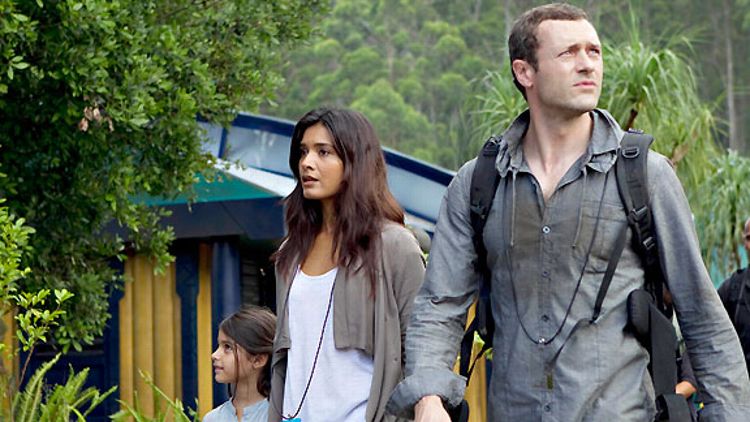 The year 2149 is a pretty rough place, according to last night’s pilot of Fox’s massively hyped Terra Nova. The air is thick with pollution, families are capped at four, and a simple orange is as rare and exotic as the Baseball Diamond. So, on the smoggy surface at least, there are plenty of reasons for the Shannon family to break their disgraced cop dad out of future jail, stuff their illegal baby in a backpack, and merrily stroll through a rift in space-time for a chance to start over on an alternate, dinosaur-packed version of Earth. The biggest problem with the show is that there wasn’t a single reason for them to stay.

To be fair, exposition is the hardest part of any television pilot. In one brief half-hour hour two-hour premiere, Terra Nova had to establish both a ruined future and a complicated past, it had to give us protagonists to root for and a reason for tuning in again — all while giving plenty of screen time to raging, scenery-demolishing carnivores like Stephen Lang. But would it have been so hard to make the present day just the slightest bit interesting — or, at the very least, worth saving? Sure, the Shannons’ sullen teenage son had a girlfriend. But we only met her when she was offering a bizarrely chipper permanent good-bye from the wrong side of a security fence. And after he went through the wormhole, Josh Shannon seemed to forget about his lost love pretty quickly once he started gunning down diplodocii alongside a midriff-baring local hottie.

The consensus reaction to Terra Nova has been that the dinosaurs are more interesting than the people. This isn’t exactly true, as the dinosaurs are still video-gamey plot devices while the humans are still humans, despite the fact that many of them look like refugees from the 22nd-century version of High School Musical, the sort of blandly beautiful model-people that wouldn’t require Photoshopping even after mud wrestling a velociraptor. But the best way to make the humans more than gun-toting, backstory-uploading, group-hug machines is to give them something to care about that isn’t each other. Shelley Conn’s Dr. Elisabeth Shannon is intriguing — and not only because she appears to have begun having children while still in junior high. But we’re supposed to believe that she didn’t have a single pang about abandoning her universe just because you can’t see the moon anymore? No colleagues at work, no close siblings or parents, no holo-DVR stuffed with backlogged episodes of Top Chef: Mars? Nope, we don’t buy it. Grim dystopias never fly because even in the darkest of eras human beings have been capable of great beauty: Consider the creation of gold-limned manuscripts in the Middle Ages or the emergence of Freida Pinto during the Bush years. As old friend Michael J. Fox once taught us, the most compelling reason for time travel is always the desire to go back.