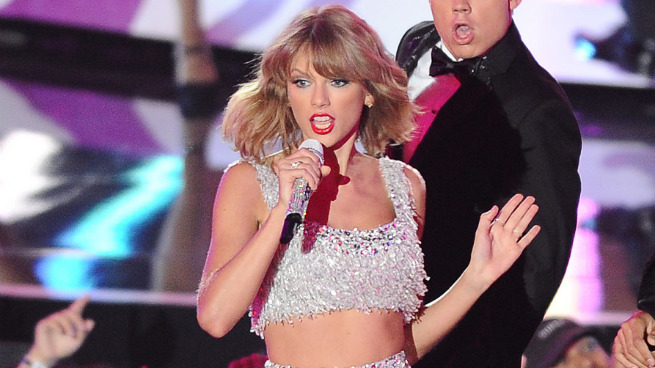 Because there was a serious risk that there might be a few minutes between now and October 27 during which “Shake It Off” was not stuck in your head, Taylor Swift has signed on to join the upcoming season of NBC’s The Voice. She’ll serve as a mentor for all four teams, which will be coached this year by veterans Adam Levine and Blake Shelton and newcomers Gwen Stefani and fellow why-do-you-need-to-do–The Voice–don’t-you-own-six-castles-by-now A-plus-lister Pharrell Williams. There’s no word about how much either star is making for the gig, but it’s a win either way you slice it for Tay, whose fifth studio album, 1989, drops this fall.

It shouldn’t really be a surprise that even a star as big as Taylor would dip in for a few appearances on the show. (Her role will be the same as Chris Martin’s: not as prominent as the coaches, but a presence nonetheless.) The Voice owes a lot of its ratings staying power to its stars, who have always been more current and candid than those of its rival singing shows. It’s actually a great platform for pop stars to show some of their “personality” in a completely safe, PR-sanctioned environment. I’m sure all the artists involved have moved a few thousand extra units thanks to moms at home who “never really cared for Maroon 5, but gosh, that Adam Levine fellow is so charming, and I love how supportive he is of So-and-so from Toledo.”

Taylor’s in the middle of a transition to an overall more straightforward pop brand, and if that’s reflected in her role on the show, there aren’t many people more qualified to teach the starry-eyed hopefuls of The Voice how to be a capital-P Pop Star. I may not be the biggest fan of her new single, but she’s right up there with Beyoncé as far as lighting up a stage and selling a performance and making stadiums full of tweens go apeshit. Hopefully, at some point we get a step-by-step how-to for the old “stop midsong, sigh, look forlornly out at the audience” move. Taylor is an experienced tour guide for emotional journeys, which is a pretty sweet (and lucrative) gig if you can get it.