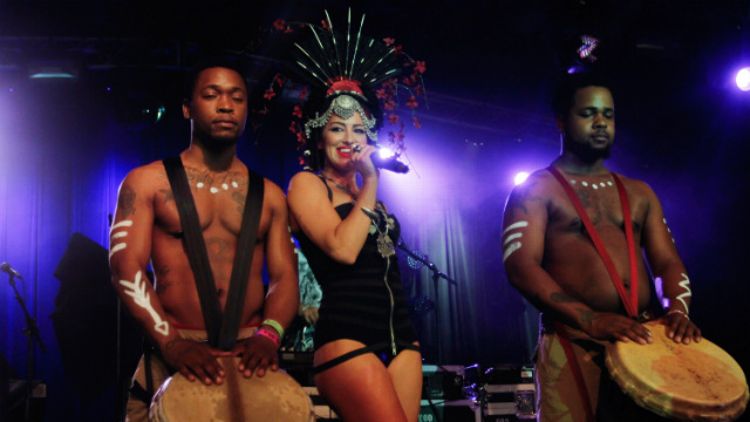 As soon as I get on the plane to Austin, I realize I’m going to be spending all week trying to figure out if people around me are in bands I know. And considering pretty much every dude is wearing sunglasses indoors, hasn’t shaved in months, is rocking a poncho or some other notable item of clothing, and appears to be hungover (or still drunk), I also realize this will be a tall order. And then I spot a musician! Right there on my flight! It’s the independent rapper Despot, whom you may know from such tracks as Mr. Muthafuckin’ eXquire’s “The Last Huzzah!” and “Freestyle” from the second Ratatat remixes album. I shuffle right by him, put my bag up in the overhead compartment, sit down, and read the safety instructions. I don’t want to make a scene this early. Still, I choose to interpret it as a positive omen for my virgin SXSW voyage.

A few hours later I’m walking down the street in Austin, idly dreading all the things I was warned about: epic lines, impossible travel situations, the onset of a marked inability to remember to eat. For these various concerns, the Warner Music showcase is the right palliative. The press line, tucked away in the back (all I have to do is walk by a guy urinating to get there), is scant, and a few minutes in I’m already drinking free Lone Star beers. (Lone Star! The same brand Tim Riggins used in his audition to become Tim Riggins! And there goes the first of what will be many, many obnoxious FNL references, delivered via multiple platforms of communication, for me this week.) I’m trying to pal up with a group of locals over the beer, and a young lady studying Eastern medicine explains that she drinks it not out of any hometown loyalty, but because it’s cheap. I nod, as this is perfectly reasonable.

The very first act I see at my very first SXSW is Neon Hitch, a sexed-up pop singer that I know has some connection to the prolific hit-maker Benny Blanco. She comes out, in a giant feathered headdress, accompanied by a pair of shirtless dudes with vague tribal markings and hand drums whose straps, at least from my vantage point, make the guys look like they’re wearing Borat-style mankinis — this, Neon Hitch lets us know, is the Neon Tribe. Then she jumps into a song about how she wants to have sex with you because she’s a bad girl. I think about how it’s hard for aspiring pop stars to figure out exactly how to market themselves as they debut. Where along the currently institutionalized Lady Gaga-freak/Katy Perry-bubblegum continuum do you want to land? And how do you make sure you come off as distinct when it’s clear there are bigger names doing more or less your thing? Then I catch myself: I’m actually thinking about music at SXSW? That was unexpected. Also, I’m no mind reader, but the naked tribal drummer on the right side does not seem that into the choreography.

Meanwhile, in the back, Warner has taken the free swag a level beyond cheap white Skrillex-fan sunglasses: a guy in a Danzig shirt is blow-drying people’s hair. Lyor Cohen is hanging out in the back, too, which makes sense, as he’s currently the CEO of Warner Music Group, but I’m still counting it as a celebrity sighting. The nutso Detroit rapper Danny Brown isn’t on the bill tonight, but is hanging — his sweatpants pulled up to the knees over black leggings, and a hoodie with wings completing the look — as well. Onstage, clothes get weirder. Theophilus London, the pop-minded rapper/crooner, has marched out along with his bassist, who is wearing a lucha libre mask, a glittery vest, and no shirt, and his guitarist, who looks like he just got back from chucking Molotov cocktails at a G8 protest. R. Kelly’s “Fiesta” is on the P.A., and everyone is rocking out.

London starts his set off slow. He does that thing where you bring a girl out from the crowd to serenade her, but, ironically, I guess? (“This ain’t on that Trey Songz shit. This is more raw.”) He shouts out his hometown Knicks, which no one (except the guy behind me yelling “They’re still on a losing streak!,” of course) cares about. But then he drops his single, “Last Name London,” and things get quite hype: Leaning toward the more traditional rap side of his persona, Theophilus has the stage full of his crew, all mobbing to the track. The crowd responds in kind. A few stage dives later, and they’re in his pocket. Then it’s on to the last act of the night, headliner Santigold. As is apparently Warner mandate, Santi has her own strange accoutrements. Her band is wearing what appear to be modified versions of old British judge wigs, and she has creepy dead-eyed dancers, too, who alternate between doing drum rolls and methodically swinging prop hammers. During a bathroom break, I’m forced to overhear a conversation that the two participants have dubbed a “piss pitch” — the one guy is trying to sell the other on his app — and I decided now’s as good a time as any to split. Around now I realize the only thing I’ve eaten all night is Doritos and Reese’s Peanut Butter cups.

Before the night is up, I stumble into a karaoke session featuring none other than head RazzieWatcher Dan Kois. He does an incredible rendition of Lauryn Hill’s “Doo-Wop (That Thing),” but is ultimately upstaged by two fortysomething women in cargo shorts who just bring the house down with Alicia Keys’ “If I Ain’t Got You.” It’s the best performance I’ve seen at SXSW so far. I get a ride back to my hotel via an amateur cabdriver in a drop-top Mazda with a backward hat who says “dude” a lot. His rates seemed reasonable.

Filed Under: Music, Sxsw, We Went there

We Found It on Netflix Instant — Atlas Shrugged: Part 1