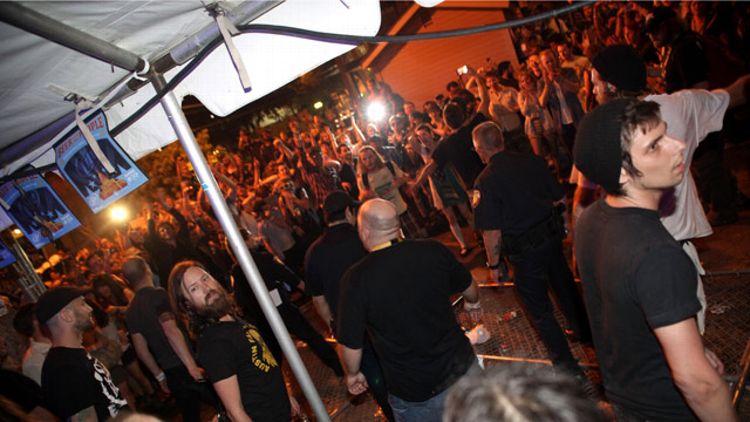 A month ago, I made my case for covering the South by Southwest Festival in Austin. Not just the nine-day film portion because I rant weekly about movie trailers, or the six-day music portion because once I spoke to DMX, or the five-day interactive portion because I know how to untag photos on Facebook, but for all three.

Ten days. Three festivals. One city. Half an adult.

At the time, it sounded like a completely normal idea, because I assumed that’s what everyone did. But based on the looks of confusion and numerous “you’re cray” comments I’ve received four hours into Day 1 of 10, it’s become clear this is not normal. Apparently, it almost borders on insanity.

I couldn’t be more thrilled.

Because I haven’t the first clue how to do this festival correctly, and they didn’t send any chaperones this time, I’ve decided to make my own checklist for the festival. When I went to Coachella in 2010, my checklist was two items long:

Thankfully for me, no one asked me, “Can I abduct you?,” because I went 2-for-2, also known as a successful weekend. Based on the length of this festival, the fact that I feel irrationally comfortable in my native South, and the fact that I brought my entire wardrobe, my SXSW checklist is slightly longer. Twenty items, to be exact. If you’re attending the festival or plan on coming in future years, feel free to copy this list and modify, based what you perceive to be your level of sanity.

1. Start a Pinterest page and have it be the single most important one at SXSW. Prospective boards include “People Sitting on the Floor by Power Outlets (Barnacles),” “Festival Volunteers Over 80,” “Two or More Black People at SXSW Interactive Together,” and “Obese Austin Cats.”

2. Infiltrate a T-shirt crew (multiple people walking in formation wearing the same witty company T-shirt), gain their trust, and then betray them by not writing a story about their product.

4. Become such a regular at my hotel bar over the first nine days that they throw me a going-away party on my last night.

5. Get onstage during a concert. [Ed. note — Do not get arrested. I’m not wiring you bail money.]

6. Get kicked offstage during a concert.

7. Have Jay-Z feel bad about the way I was treated by the security guards and get brought back onstage.

9. Walk a red carpet, and when asked my name and media outlet, always respond with “Tyler Perry.”

10. Start a slow-clap at the end of a film screening. And then fail.

12. Tell as many people about a secret “Boss of All Bosses” concert, with Bruce Springsteen and Rick Ross. Tell them that it’s on the corner of New Jersey Avenue and Port of Miami Boulevard every day at noon and that it lasts 16 hours.

14. See the screening for Shut Up and Play the Hits, the LCD Soundsystem final concert film, and every time I make a cameo in the film (I was 10 feet from the stage), squeeze the air horn that I snuck into the theater.

16. On the warmest day, rent a bicycle and a tuxedo and patrol the streets like Steven Seagal: Law Man.

18. Fill an entire Moleskin with notes, observations, sketches, and descriptions of phenomenal beards.

19. For the first time in my life, sit in the front row, as Al Gore interviews Sean Parker.

I don’t like to fail, so all of these will take place. Grantland coverage to begin Monday, March 12. Brace yourself.