Sundance Diary, Day 7: One Swag House to Rule Them All and the Documentary of the Festival

Some of what you can see at this festival you truly can’t see anywhere else. Not yet. Take Frank, a perfectly fine Irish comedy, with Domhnall Gleeson and Maggie Gyllenhaal, that asks us to tolerate Michael Fassbender wearing a giant papier-mâché head on his shoulders for most of the movie. Fassbender is charismatic and physically magnetizing enough for it not to matter that you can’t see his face. If it makes it to U.S. screens, that gimmick might rival the frustration some people are currently having about Scarlett Johansson in Her.

Or take Airbnb Haus. It’s a two-story cottage not far from the bottom of Park City’s Main Street. To pass by it on a Sundance shuttle bus is to pull the stop cord, get off, and wander inside. That’s how much it looks like a work of production design: You don’t just want to swing by this place. You want to star in it. Cereal and toy trucks decorate shelves beneath the cantilevered staircase. On the second floor, one of the communal tables is reserved for adults to color and draw. (One assumes, anyway, that the craft tables are for adults: A fit gentleman with a rock jaw and perfect teeth the color of skim milk was asking for driver’s licenses at the door.)

There are board games, scotch tastings, live-band karaoke, and free coffee made with Four Barrel espresso. (It’s easier for a man to buy a full-length chinchilla parka at Sundance than it is to find more-than-potable coffee.) And yesterday, Ryan Coogler, the director of Fruitvale Station, was leaning by the front door, taking compliments for what seemed like an hour. The whole scene is intensely appealing, absurd, and a tad appalling: a Wes Anderson après-ski mixed with advertising ectoplasm. The festival now has so many corporate sponsors that the Sundance trailer preceding most of the films has thank-you credits almost as long as the trailer itself.

The cottage is a surreal, borderline embarrassing place to wind up after leaving a few of the documentaries here, whether it’s The Return to Homs, a powder keg of front-line immersion set amid the conflict in Syria; Concerning Violence, another staggering found-footage political disturbance from the director of The Black Power Mixtape 1967-1975; or even something as monotonous as The Internet’s Own Boy, an intellectually rigor-free halo-polishing of the Internet activist Aaron Swartz.

Not far from Coogler and his admirers, I found myself draped over a railing. It wasn’t long after leaving Hubert Sauper’s We Come As Friends. I was trying to figure out what had just happened. If you’ve never seen one of Sauper’s documentaries — Darwin’s Nightmare, from a decade ago, is the most acclaimed and the most astonishing — the experience is like being air-dropped into a horror film without a map. You wander around his Africa aghast. The atrocity, corruption, waste, suffering, exploitation, and decay: all so inexorable. With Sauper, that’s the horror’s last stage: acceptance.

Often you come to this festival and partake in a steady diet of tough nonfiction with a silver lining. Sauper gives you only the cloud — and the thunder and monsoons. In We Come As Friends, he’s still in the Africa of Darwin’s Nightmare, flying his homemade airplane over a newly independent South Sudan. With another filmmaker, the potential in that symbolism would be crushing: Look at him luxuriantly looking down! But Sauper turns his vehicular vanity into a warping device. The images captured from the air are of sideways and upside-down landscapes. The country’s industrial exploitation becomes the subject of the film. There are no talking heads or orienting title cards. He trusts his filmmaking to speak for itself. It does. 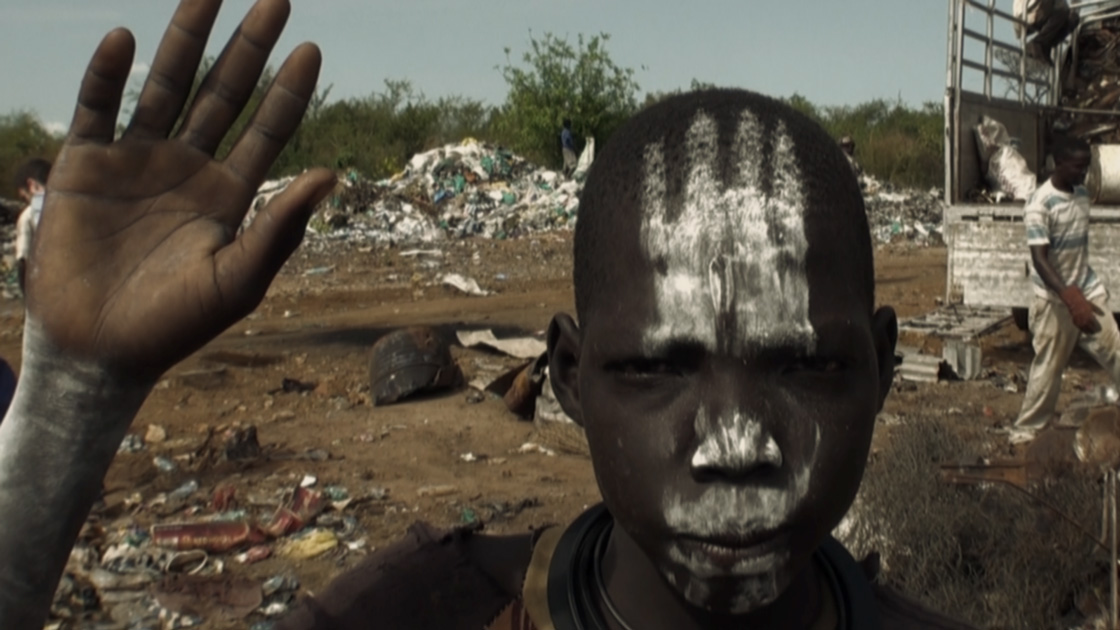 What’s presented is elemental. Wealthy nations feast on a resource-rich continent. The Sudanese that Sauper finds are starving, displaced, deprived of those same resources, their pumped water contaminated. Leaders grab power and give land away. Sauper gathers up nauseating sequences — a family of Texas missionaries, for instance, forcing barefoot children into white socks and sandals because they could. Elsewhere, a villager ruefully holds a contract he signed leasing a vast swath of land to a Dallas hedge fund called Nile Trading and Development Inc. for 49 years and $25,000.

Chinese oil employees are shown slurping their lunch in the cool air of a Sudanese refinery as stone-faced villagers sit crowded and hungry in a hut. This sort of juxtaposition only sounds like poetic excess. In the film, it feels like the tip of an iceberg. For every two or three instances of exploitation, there’s a moment spent listening to a Sudanese man or woman lamenting or lambasting what has come to pass — or simply stagnating in the dust. Sauper includes footage of the conflict in South Sudan recorded on a militiaman’s camera phone. The internal conflicts compound the exploitation; while the Africans kill each other, the world continues to swoop in and do what it wants, taking advantage of bribable leadership and deplorable economic policy.

How does Sauper’s scathing, visiting-lecturer impressionism differ from, say, the American action-adventure found in Fishing Without Nets, a fiction thriller about Somali pirates that premiered here last weekend? Sauper is a flavor of journalist: He has a sense of curiosity missing from the American movie. Africa to him is rich in irreconcilable problems and conflicts, and the film makes a restless presentation of almost every side so even organizations that would seem to have South Sudan’s best interest in mind fail it. Hillary Clinton and George Clooney make brief secondhand appearances and seem incriminated by dint of even humanitarian association.

This isn’t to say that Sauper is a saint himself. You’re free to suspect that this is a director who’s very pleased with himself. He can work with exasperating cinematic pomposity. The opening image features dozens of black ants scurrying around a toy plane. During a gale, he plays a version of “Wild Is the Wind,” not because it seems apt (it isn’t) but because he’s someone who loves that song. There’s a way that Sauper’s bad judgment makes you question his good judgment. His last two movies seemed to confer upon him a degree of assumed African authority: In his way, only he can explain this continent — in scathing dreams and nightmares — and there’s a danger in that. In the name of political point-making, he sometimes loses sight of the limits.

On the way in to watch We Come As Friends, a friend introduced me to Sauper, who had been in the middle of a conversation with someone else. To me, he said hello, shook my hand, and then asked, “You’re from Ethiopia?” This actually wasn’t a question. He was half-telling me. Not, I think, because he cared about the answer (it’s “no,” Hubert), but simply because he could.

Sean Penn and Charlize Theron's Gun Sculpture ... and Other Artistic Statements From This Week's Tabloids