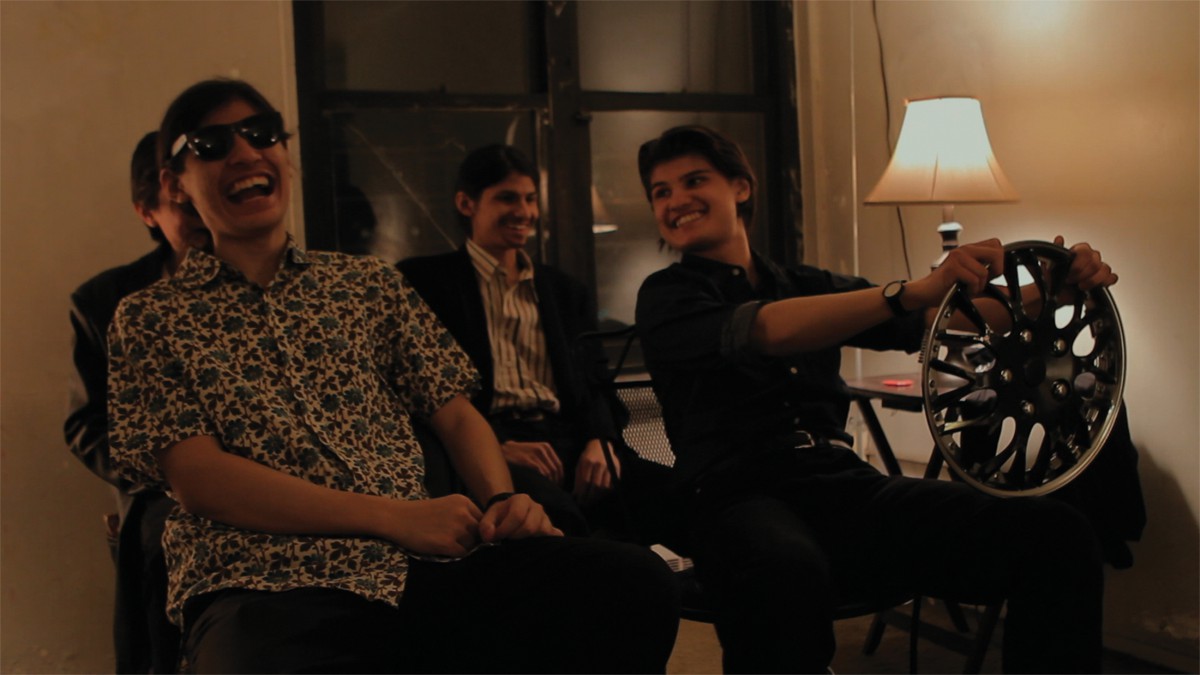 Some documentaries show up here and you can easily surmise what incited them. A filmmaker opened a newspaper, was transfixed by a public figure, felt a sense of social justice, knew Al Gore. The provenance of The Wolfpack is unclear. How did Crystal Moselle find the Angulo family? The seven kids — a girl and six boys, half-white, half-Latino — have never left their cavernous apartment on the upper floor of a sky-scraping Lower East Side housing project. But there she is, with cameras, watching the kids reenact their favorite movies — Reservoir Dogs, Pulp Fiction, Goodfellas, Halloween. What a sad, strange, intoxicating movie. Their abusive father, with the rueful compliance of his wife, has effectively imprisoned them from birth. They’re being homeschooled by their mother. A 5,000-film library is their only contact with the outside world. Presumably, the movies are both their Juilliard and their peer group.

The boys have big noses, high cheekbones, and hair as long as Crystal Gayle’s. They’re androgynous looking. Moselle finds them articulate and self-aware, with a striking sense of what is normal and what is sane. One day, one of the eldest boys, Jagadisa, slipped into his Michael Myers Halloween costume and out of the apartment. He was surprised to discover there were no lasting repercussions. Soon the others began leaving too.

Moselle gives both the interiors and exteriors an otherworldliness. The whole movie feels dreamed. The apartment is made to seem enormous. The outside world, by comparison, seems small. When the brothers hit the streets (the oldest is in his early twenties), they do so as a pack, dressed in old clothes and sunglasses that are wrong for their faces. They’re probably going for the signature slow-motion stroll from Reservoir Dogs.

But the brothers appear to be adjusting to life OK. In Park City, they’ve become celebrities. Last night, at a shuttle stop, a handful of the boys hopped on the bus. They had sharp haircuts, overcoats, and scarves. (They looked very Corleone.) They were using cell phones. The bus turned out to be going the wrong way, so they hopped right off, leaving behind a handful of amused, loosely star-struck passengers: “You know who that was, right?” one of us asked. Of course, I wished they’d have stuck around, because there are so many questions I want to ask.

Moselle asks questions, but this isn’t the investigative work warranted by a case this bizarre. She lets the imagery (hers, the kids’) speak for itself, and her approach haunts you. You do wonder, though, what a journalist or a mental-health professional might have done with all this access. It’s such a ripe subject for nonfiction and so unfathomable a story that you also wonder whether it could be a hoax. But the reenactments that Moselle shows us are almost too organically psychological to be fabricated: violent films ultimately about brotherhood.

Isolation has brought out the artistic genius in the Angulos. They’re Wes Andersons as raised by a dictator–prison warden to grow up to be the shut-ins from Grey Gardens — or like the children Miss Havisham never had. The boys come to hate their father (the youngest is the girl; she hardly speaks) and affirm their love for their mother. But, again, it’s almost too perfect. The astonishing talent for production and performance that these boys possess is a chilling, backhanded tribute to their father and torturer. His name is Oscar. 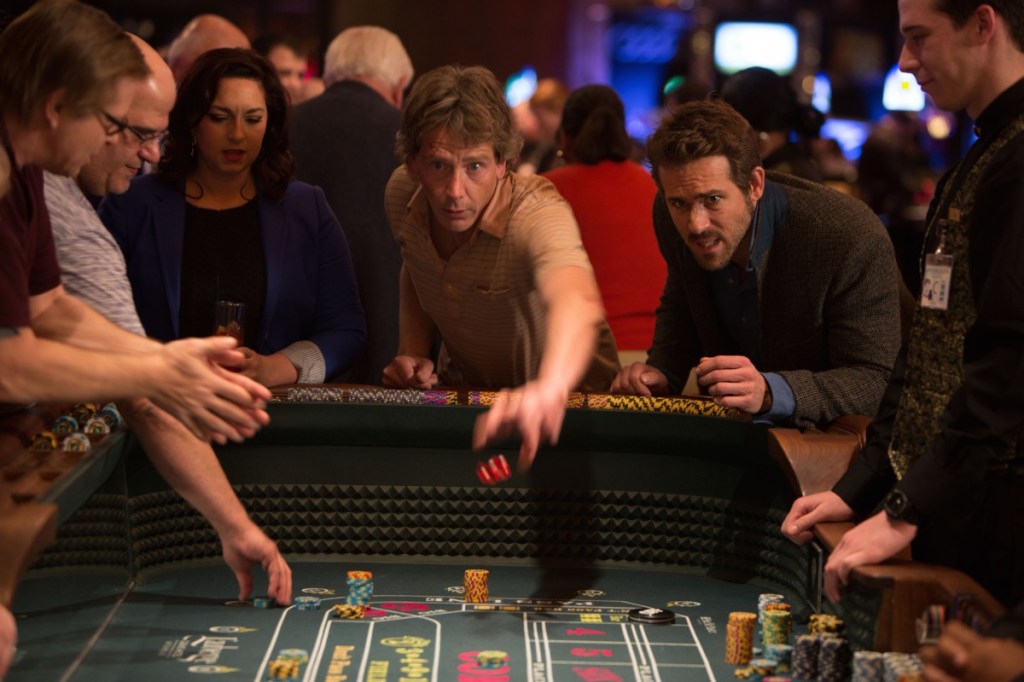 Some of us are looking for reasons to reinvest in Ryan Reynolds. The ascent of his ranginess and sarcasm was obstructed by the rises of Channing Tatum and Bradley Cooper and Ryan Gosling, the return of Matthew McConaughey and the steadiness of Jake Gyllenhaal. There’s been nowhere, of late, for Reynolds to dock. Those gentlemen cover the waterfront. But he’s simply been in need of filmmakers willing to take a chance on him, the way the writers and directors Anna Boden and Ryan Fleck have in Mississippi Grind. It’s a gambling movie that pairs Reynolds with the Australian Ben Mendelsohn, who plays an American here and who is often cast to conjure menace or do camp. But Mendelsohn also has the slack, dolorous face and skill for explosion that suits Arthur Miller–scale tragedy.

The film, Boden and Fleck’s fourth (they made Half Nelson), doesn’t overdo it. Reynolds walks into a gambling parlor, sits down at a poker table, and sees something in Mendelsohn, who in turn assumes that Reynolds’s drifter is good luck, his “leprechaun.” They wind up in a car, bound for New Orleans, hoping to win big at a poker tournament, stopping along the way to win biggish and lose bigger on dogs and horses and slots. I love the way Boden and Fleck work here. Their script doesn’t force the issue.

These two men are strangers, each seeing what he wants in the other. I don’t know how you arrive with these two actors opposite each other, but they harmonize well. For Reynolds, it’s just a relief to see him play an adult who doesn’t have to know it all. He’s very good here, hoping this thing with his new friend pays off. Mendelsohn, meanwhile, is a ham, but Boden and Fleck do their best to have everything he does seem adequately life-size and desperate. Mendelsohn wore a giant fur to an event the other day. He looked like he was being eaten alive for PETA. But it was the gesture of an actor taking his work more seriously than he did the surrounding nonsense.

It’s rare now for an American movie to spend two hours on characters whose behavior, on a human scale, is suspenseful and surprising. There are a couple of scenes, in which Mendelsohn stands in front of a dresser and another when he stares into a safe, when my heart started to break with pity. This is a film about a particular kind of bottom. In its comic-tinged unhappiness, it is to gambling what John Huston’s marvelously grave Fat City is to boxing. Mississippi Grind makes overtures to an improving economic climate. But like Huston, Fleck and Boden aren’t wildly optimistic. There’s a light at the end of the tunnel. But it’s being generated by an 11-watt bulb. 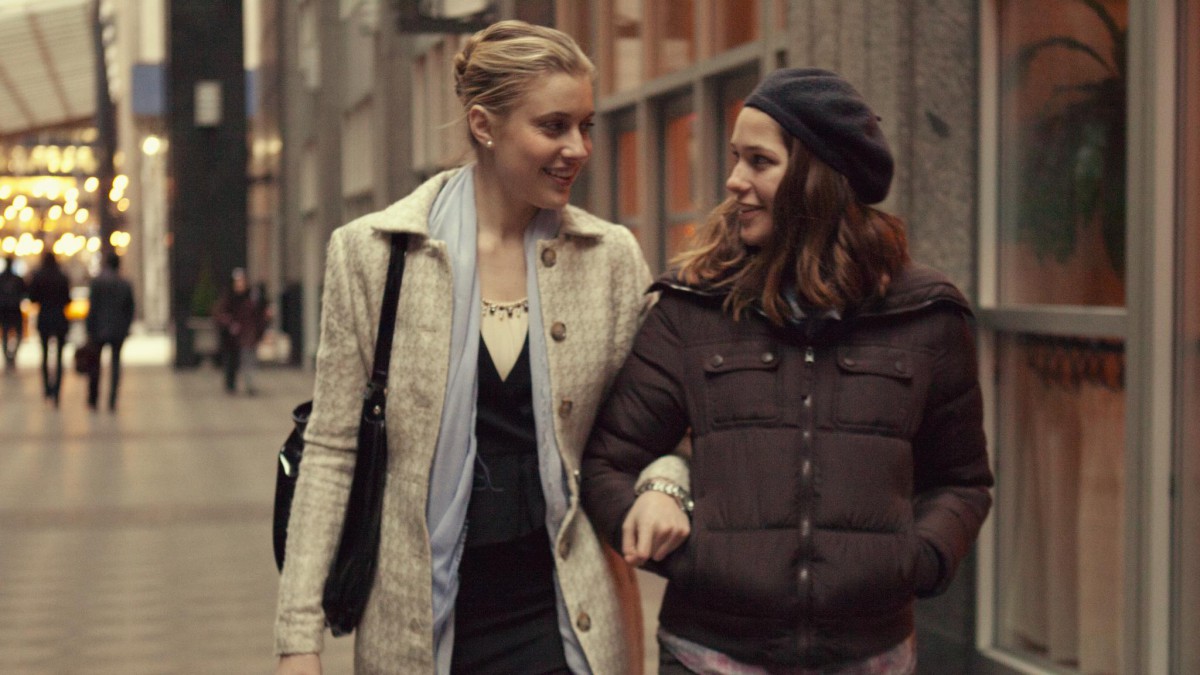 God bless Noah Baumbach. He’s fallen so deeply under Greta Gerwig’s spell that he can’t see straight anymore. The energy of his movies has always been European and the acidic sensibility distinctly American. With Gerwig, he’s found whimsy. The two movies they have written together and she has starred in — Frances Ha and Mistress America, which premiered here a couple of days ago and will be released by Fox Searchlight — have an eventually endearing unruliness. I’d say they’re unfocused, but the focus is her and her selfish, aloof persona and odd sense of timing.

Mistress America establishes a world away from her. It follows a first-year Barnard student named Tracy (Lola Kirke) as she sets up a very amusing life away from her mother (Kathryn Erbe), who is in New Jersey. She’s a writer who wants to break into a literary magazine that taps new members with obnoxious fanfare the way some singing groups and secret societies do. The film has such a natural satirical eye for the absurdities of college that it seems foolish of Baumbach to leave it. But he finds more. Tracy’s mother is getting married, and Tracy has decided to meet the prospective husband’s 30-year-old daughter Brooke, whom Gerwig plays as a high-functioning dope.

Brooke’s energy intrigues Tracy, who starts writing critical fiction based on her future stepsister. Brooke is working on a comical number of projects and ideas. She’s meeting with investors to open a restaurant. She’s talking about Twitter, but we never really see what she tweets. She’s full of shit and hot air but also such persuasive, delusional self-belief that you start to think maybe she is good at something.

When the investors and her absent Greek boyfriend, Stavros, back out, she and Tracy, Tracy’s platonic boyfriend (Matthew Shear), and his insecurely domineering girlfriend (Jasmine Cephas Jones) drive to posh Connecticut so Brooke can shake down an estranged friend who stole her T-shirt idea and her fiancé. The Connecticut scenes are like mid-period Pedro Almodóvar crashing the dinner-party scene in a Luis Buñuel movie. I’ve wondered how Buñuel’s delicate knocks and broad surrealist swings would play in an American context. This passage feels like an accurate rendering.

But Baumbach’s surrealism isn’t cinematic or political, the way Buñuel’s is. It’s purely socioeconomic. The ground beneath the relationship keeps shifting so that nothing is reliable and nothing means anything. In The Squid and the Whale, Margot at the Wedding, and Greenberg, Baumbach was building a joke and trying to control embarrassing scenarios. His three most recent movies — While We’re Young is due out in April — have been even shaggier and less structured. The self-conscious comedy in Mistress America swarms you.

You’re so busy swatting away put-downs, asides, humblebrags, and jokes that you honestly don’t have time to figure out which ones work and which don’t, or whether the movie is really any good. You just know that you’ve been stung. Most of the comedic attack comes from Gerwig’s foamy unflappability. She’s Melanie Griffith if Griffith had a director to cater to her as if she were Diane Keaton. But by the time Brooke sieges Connecticut with an army of awkward intellectuals behind her, Gerwig is no longer a comedic actress. She’s a narcissistic general whose lead Baumbach seems happy to follow.