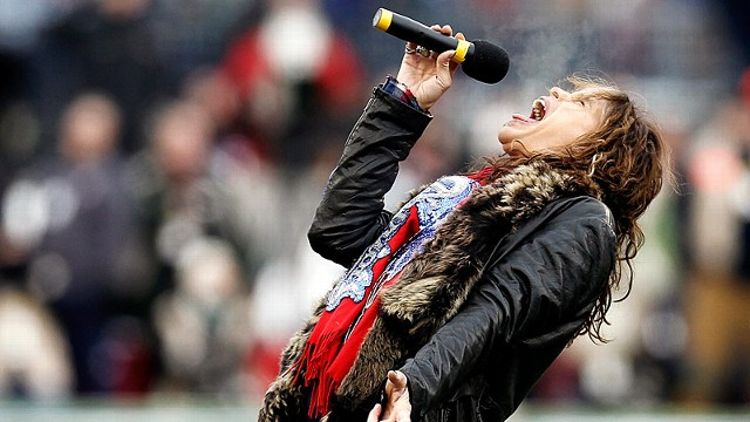 If, for some reason, — maybe your grandmother was in town, or maybe you were orchestrating a low-level drug transaction? — you did not spend your Sunday watching every minute of football-related television, you might have missed one thing: Steven Tyler, famed reality TV show judge, singing the national anthem before the AFC championship game. What you probably did not miss, however, was the squealing, horrified response to Steven Tyler singing the national anthem before the AFC championship game. Always vigilant toward any perceived desecration of our nation’s proud ditty, and also always so down to make fun of anyone who drops the ball in public, Americans across the country banded together to rip into Tyler, mostly on Twitter, for an odd, tuneless performance. That means after you got home from grandma-squiring and/or drug-slinging, you were probably pretty pumped to dive into Steven’s screw-up, expecting Aguilera levels of embarrassment. But check it out below: It is really not terrible enough to be out-and-out hilarious. Terrible, yes! Rhythm-challenged and cracked, and really just unpleasing to the ears in any direction you can imagine. But Tyler didn’t screw up any words, and the only time I was moved to chortle was when he lets out that insane aaaaaaahhhhhh after “land of the free.” A few more of those, Steve, and we might have been talking about an all-time great terrible national anthem. Also, bedazzled Patriots scarf? You don’t get that at the pro shop!