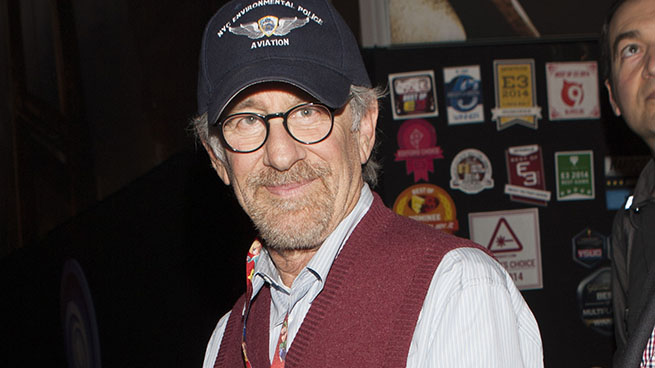 Steven Spielberg has updated his planner, people, and he’s about to get busy. After taking a directorial vacation in 2013 and 2014, Spielz has landed on an October 16, 2015 release for his Cold War spy thriller starring Tom Hanks, the one that’ll feature a draft from the Coen Brothers. Then there’s his live-action adaptation of Roald Dahl’s The BFG coming July 1, 2016. The Coen Brothers are not, to my knowledge, working on that one. The Enormous Crocodile seems more their speed.

After breaking his ankle on the set of Star Wars: Episode VII, Harrison Ford may not be able to work for up to two months.

Nikki Finke says Father of the Bride 3 is happening, and that Steve Martin’s onboard. “The twist in this threequel is that Little Matty is now 29 and gay and getting married to a Navy SEAL’s son. Father of the bride George is ‘thunderstruck and speechless’ and has problems with the whole gay thing. So wife Nina kicks him out of the house, according to the pitch which Disney loved.” That’s a lot to digest.

The Powerpuff Girls are returning to Cartoon Network in 2016 with a “new series.” I guess that means something different than “new episodes.”

Alex Trebek is now the most hostingest game show host ever. [via]

The New Yorker has George Saunders getting silly about liner notes. (They also had Nick Paumgarten go long on Broad City.)

And Jackie Chan, John Cusack, and Adrien Brody are making Dragon Blade, the most expensive Chinese-language film ever.