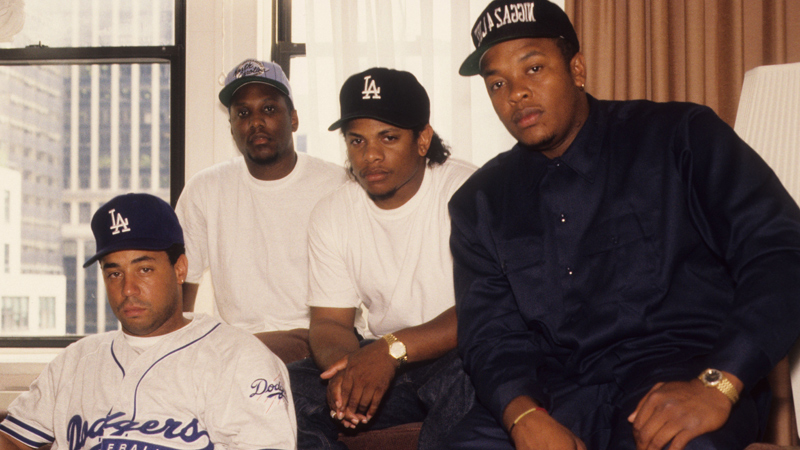 … People you’ve never heard of. As Billboard reports, the N.W.A project Straight Outta Compton has cast actors for its three most infamous members, and they are O’Shea Jackson Jr. as Ice Cube, Marcus Callender as Dr. Dre, and Jason Mitchell as Eazy-E. First off: Yes, I can’t believe this movie is actually happening, either. Second: So who the hell are these guys?

The name of Movie Cube should be familiar, of course, being that it’s Ice Cube’s son. Yep, Ice Cube managed to land his son the role of himself. O’Shea Jr. is 24, and seems to have been, at least at one point, an aspiring rapper. I guess it makes some kind of sense, but I find it so bizarre, if not potentially psychologically damaging — first, a lifetime of outlandish expectations begotten by the fame of his father, now a physical embodiment of the old man?! Plus he doesn’t even have the three dots by the eye, so it’s not like they’re saving money on three-dot makeup. Quite possibly, Junior was great in auditions; more than likely, Cube just used his world-famous Coors Light face-off technique to get his way. Either way, it’s highly impressive.

Jason Mitchell, Billboard explains, “landed the role of Eazy-E after an out-of-the-park screen test. If his casting sticks, it will make for a great backstory, given that he is said to have no acting background and works in a kitchen.” That is a great backstory! And just imagine how magnetic of a personality this dude Jason must be to come out of nowhere and nail the larger-than-life character of Eazy-E. He’s probably incredible to be around. Just a constant dynamo of a person. What I’m saying is, I wish I also worked in that kitchen.

Sobering aside here: The casting of Jason Mitchell also means the non-casting of Eazy-E’s son Eric Wright Jr., a.k.a. Lil Eazy E, who’s been doing the “pretend to be Eazy-E” thing for years now. Apparently, Eazy-E’s widow, Tomica Wright, was the last holdout for the movie to move forward, and I think we know why.

Meanwhile, Callender is a “classically trained … alum of New York’s Shakespeare Lab at the Public Theater … more familiar with Chekhov than Compton’s gang-plagued streets” (NAILED IT, BILLBOARD); his actual experience so far consists of a few procedural spots. Billboard also notes that Dre wanted Michael B. Jordan, “but the actor is about to take on a Fantastic Four reboot.” OK, look, let’s be as honest with ourselves as possible here: Michael B. Jordan is one of the hottest young actors in the game right now, and even Dre and his headphone billions wouldn’t have actually just been able to pick up the phone and get Michael B. Jordan for this.

But that’s all for the best. Universal has been pushing this project along for five years, and has surely looked at every mixtape schmo and major-label C-list MC around by now. That the movie is now finally moving forward, with unknowns, is the most promising outcome. Dre (see: Apple), Cube (see: box-office winner 22 Jump Street), and even Eazy-E (see: artfully fading Southern California street murals) still command sizable slices of our pop culture imagination, with big, distinctive, imposing personalities. We feel like we know them. And so the less we know about the dudes playing them, the better.

Look, let’s continue to be as honest as possible with ourselves here: It’s quite possible to almost probable that this movie will be terrible. Music biopics are almost a trap: The true-life stories are so rich, which makes them enticing in the first place, but that same sprawling richness is so tough to adequately capture onscreen. (On the other hand, Aaron Sorkin’s Steve Jobs movie is three 30-minute scenes, which is rad.) So it’s a long shot, yeah. But for at least a fighting chance at capturing the immense raw power of N.W.A, they’re gonna have to get rough and dirty. By all means, hire some more kitchen workers.

On that note, who’s playing Ren and Yella? Are Patrick Stewart and Ian McKellen available?

The Movies of 1994: Interview With a Seagalogist