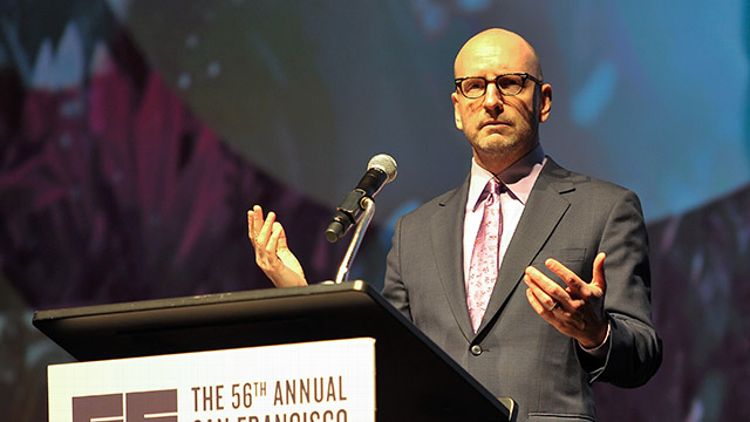 Before anybody sits down to eat a big bowl of Iron Man 3 (well, any North American body; the rest of the world’s been eating for a week, and based on the grosses I’d say they’re full), Steven Soderbergh needs the world to know that the movies are in trouble. In a rambling but frequently pointed speech Saturday at the San Francisco International Film Festival, the man who gave us Sex, Lies, and Videotape, Out of Sight, Erin Brockovich, Traffic, Bubble, three Ocean’s movies, Che, The Informant!, Contagion, Side Effects, and a soon-to-be-aired movie with Michael Douglas as Liberace and Matt Damon as his lover, lamented the death of art in the movies.

“We are a species that is driven by narrative” to make sense of the chaos, he told a receptive audience. But we are no longer in the narrative business. We’re in the chaos business, the business business. The Hollywood studios are making fewer movies than they were a decade ago, while the number of independent films has grown astronomically during the same 10 years. But the studios dominate the marketing, which is why our grandmothers know the opening date for Man of Steel but have no idea who Olivier Assayas or Carlos Reygadas are. Soderbergh wondered why movies cost so much and, in a memorable observation, accused the executives of being acinematic and possibly movie-illiterate:

The meetings have gotten pretty weird. There are fewer and fewer executives who are in the business because they love movies. There are fewer and fewer executives that know movies. So it can become a very strange situation. I mean, I know how to drive a car, but I wouldn’t presume to sit in a meeting with an engineer and tell him how to build one, which is what you feel like when you’re in these meetings. You’ve got people who don’t know movies, don’t watch movies for pleasure, deciding what movie you’re going to be allowed to make. That’s one reason studio movies aren’t better than they are, and that’s one reason that cinema, as I’m defining it, is shrinking.

Soderbergh’s dismay is obvious in a sense. This is a trend that depresses the blockbuster-averse (Marvel Comics and DC have ruined American auteurism!) and annoys the blockbuster-prone (Marvel and DC are the auteurs!). But it was heartening to see him speak his mind, with statistics and anecdotes that helped him make a case against an industry he keeps threatening to break up with. San Francisco’s festival is the ideal home for such a measured rant. It’s home to some well-regarded technical and visual-effects houses whose contributions to movies tend to be far more gratifying than what any one character does. Not only do the technicians care, but what they do is a form of art. San Francisco is also the sort of place where Soderbergh’s use of “ambiguity” as a bygone artistic trait gets a wry, knowing laugh. The festival is 56 and has always been iconoclastic in its programming. It wants you to feel like you’ve discovered something.

There’s a new director, Ted Hope, the independent-film producer who, at Good Machine, had a hand in bringing us everything from Edward Burns’s The Brothers McMullen and Todd Solondz’s Happiness to In the Bedroom and a significant handful of Ang Lee’s early and earlyish films. Hope has been outspoken, and maybe even rabid, about protecting and cherishing independent filmmaking, going so far as to offer advice to aspiring filmmakers about how to stay true to themselves. Soderbergh’s rant was after Hope’s own heart. Soderbergh didn’t have a big idea to push. He didn’t have solutions to a problem he presented, just stinging concerns. In that sense his State of the Cinema address was less TED Talk and more Ted Hope Talk.

Charting the Zodiac for The Sopranos, Mad Men ... and South Park