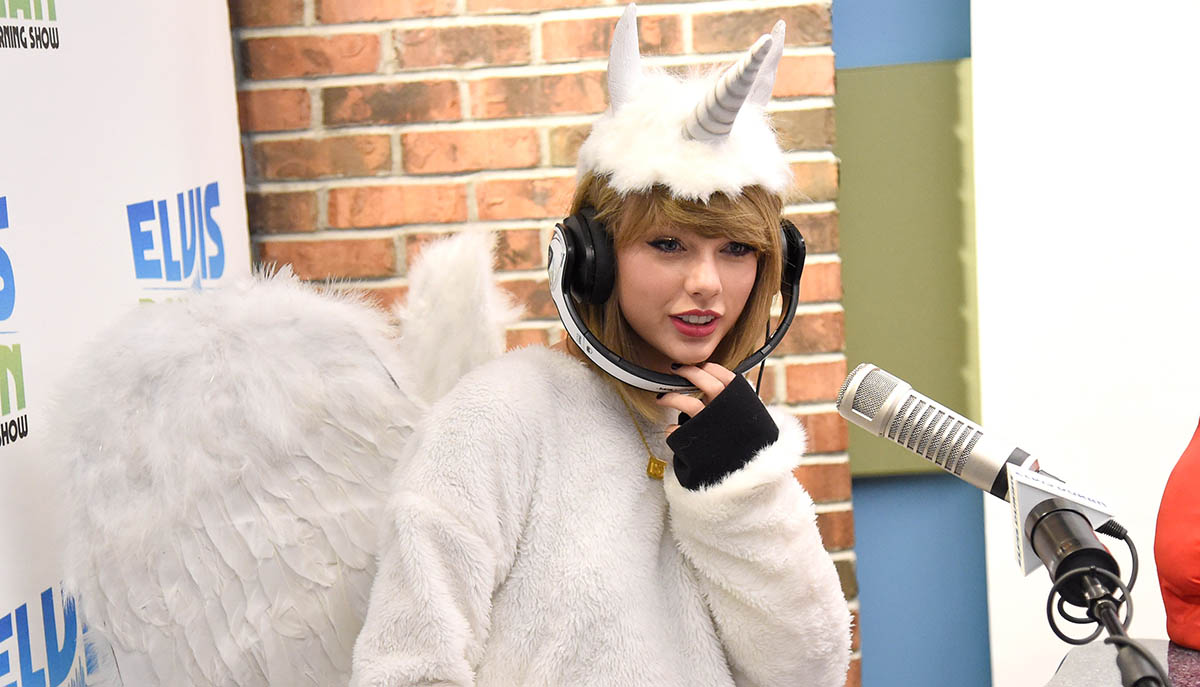 On Monday, news leaked that Taylor Swift has declined to release her latest album, 1989, and simultaneously removed all of her other albums, from the streaming music service Spotify. The prevailing thought: Spotify makes money off of Taylor, Taylor doesn’t make money off Spotify.

People were upset, people had things to say, and people had opinions.

My immediate thought: Who cares? Because if you want to listen to Taylor Swift songs on Spotify, the last thing you need is Taylor Swift.

This tune — a song about having odd dreams about Tim McGraw trying on jeans — is wonderfully delivered by Déjà Vu. A delight.

A banger. What Twinkle Twinkle Little Rock Star did here, substituting aural tryptophan for the lyrics, is nothing short of amazing. Make sure you don’t fall asleep before the Christmas bells come in. But, truth be told, that’s easier said than done.

“I’m Only Me When I’m With You” is a song about taco night. And Simon blacked out on this track. Straight bodied it.

The craziest thing about Boogie Boots’s “Picture to Burn” is that it’s not even the best song on Angry Backwoods Woman. Not even close.

I barely remember how Swift’s “Love Story” sounds, but there’s no way it’s as beautiful as the St. Martin’s Symphony of Los Angeles’s version. There’s a 90 percent chance you’ll tear up. And yes, this is on the same album of 100 classical masterpieces as “Greensleeves.” Because it deserves to be.

There’s reason to believe a Taylor Swift song can’t get more urban. But then you stumble upon “White Horse” by the R&B Urban Allstars. And, again, you learn that anything is possible.

I’ve never heard the Taylor Swift version, so I have to assume this rendition, by ProSource Karaoke, is better. I just can’t see Taylor improving on what ProSource Karaoke has done here. No chance.

If there’s one takeaway this post should leave you with, it’s that the lullaby Taylor Swift industry is alive and well — and, like everything else, better once Taylor Swift is out of the picture. “Hey Stephen,” originally a song about Stephen from Laguna Beach, skyrockets once a xylophone is substituted for Swift’s voice. What a delight this is.

The O’Neill Brothers Group — a law firm in Traverse City, Michigan, I assume — has done a great thing here. As many others have figured out, the key to a classic Taylor Swift song is to take all the vocals out and make it feel like a score to a rom-com montage scene that takes place on two planes, heading in opposite directions.

By now, I’m forgotten what Taylor Swift’s voice even sounds like. And I couldn’t be happier. “Forever & Always” by the Silverlake String Quartet is very, very good. It’s what happens when Vanessa Carlton’s “A Thousand Miles” crashes into Kanye West’s “Runaway” and the end result is Taylor Swift voice isn’t anywhere to be found. Classic.

Taylor Swift’s voice is actually on this song. So there’s that …

Taylor Swift’s voice is also on this song. So I guess that’s cool if you’re here for Taylor.

“Two Is Better Than One” — Boys Like Girls with Taylor Swift, Love Drunk

“Two Is Better Than One,” a song about lofts in TriBeCa, actually features the real Taylor Swift. So it’s skippable.

The soundtrack to Hannah Montana The Movie features an assortment of artists. Most of the songs are by Hannah Montana. Most of the others are by Miley Cyrus. There’s one by Taylor Swift. It’s called “Crazier.” Never listen to this song voluntarily.

Spotify should remove this song. Because it’s terrible.

This is another song that, now I’ve heard the non–Taylor Swift version first, I can’t imagine a world in which Taylor’s is better. Karmin covering Taylor is like when Lil Wayne ruined Jay Z’s “Show Me What You Got.” But ruder.

“Back to December” — Rina Johnson, Tribute to Taylor Swift

Truth be told, not even Rina Johnson could save this song. And she tried so hard. But there’s nothing to be salvaged with “Back to December,” an odd song about wishing it were Kwanzaa. Nothing.

“Half of My Heart” — John Mayer with Taylor Swift, Battle Studies

Oh, the John Mayer song with faint vocal flashes of Taylor Swift. Yes, it’s OK to call this the least fun song of all time. No one will blame you.

Megan AND Liz. Unreal to have them both on one track.

“The Story of Us” — Fisher-Price, Naptracks Volume 1 – Instrumental Lullaby Versions of Taylor Swift

The thing that differentiates Julia and Tyler’s version from Taylor’s is that sparks are actually flying. They’re not faking it. The sparks are real. And they’re flying.

Paris Music doesn’t get to a Volume 19 by making subpar music. And “Ours” is a perfect example of what Paris Music can bring to the table. If “Ours” is your first intro to Paris Music, I assume you get it now.

“Safe & Sound” — Taylor Swift and the Civil Wars, The Hunger Games: Songs From District 12 And Beyond

Did the Civil Wars break up because they were on a song with Taylor Swift? Who knows, and highly doubtful, but probably yes.

“Eyes Open” — Taylor Swift, The Hunger Games: Songs From District 12 And Beyond

Even though Taylor’s voice is on here, it’s distorted enough that you can get lost in the Molly water infused into this EDM masterpiece.

I will never know the lyrics to this song, because I will only ever listen to what the Beautiful People have done in this instrumental version of “Ronan.” And I’m very OK with that.

“I Knew You Were Trouble” — Alex Goot

“I Knew You Were Trouble,” a song about volunteering, is admittedly performed well by Taylor. But Alex Goot takes it to a new place. An emotional place. You can tell Goot’s been in trouble before, and that he has a story to tell. I love Alex Goot.

Miss Lush has been at it so long, it’s almost like, what more does she have to prove? She definitely made no strides forward with “State of Grace,” but it’s at least nice for her to remind us she’s still out here. You can’t help but respect Miss Lush.

Is there a better band name than the “Tune Robbers”? Absolutely, but it’s still a great name for a band that robs Taylor Swift, for the betterment of the public. No one’s ever complaining when the Tune Robbers go to work.

McGraw-Swift-Urban: It’s like if City High had been kidnapped, sent to Nashville, and then forced to keep making music.

You’re hearing it here first: Tyler Ward should be a star. Taylor Swift should give all her money to Tyler Ward. This is something I believe.

Alex G is back, this time with Jon D. And yes, they crushed “Everything Has Changed,” a song about gentrification. Not a bad moment in this song.

Correction: Taylor Swift should give half of her money to Tyler Ward and the other half to Tiffany Alvord. Tiff, Tyler, Miss Lush, the Sax Hit Players — these are the real heroes.

There’s very little known about A Tributer. But whenever we get a jam from A Tributer, it’s always a good day. And then, just like that, A Tributer disappears. We just have to wait — patiently — until A Tributer’s ready to step back into the spotlight. It’s all very frustrating, exhausting, rewarding, beautiful.

“Shake It Off” — Megan Nicole

Yes, Megan Nicole. Get it, girl. Spotify’s all yours now, boo.

1989 is bigger than Taylor Swift. And Jonathan Young is here to make this point explicitly clear.

MOLOTOV COCKTAIL PIANO DID AN ENTIRE 1989 PIANO ALBUM AND IT’S BETTER THAN 1989.

“Out of the Woods” — Ali Brustofski

Yes, Ali Brustofski. Get it, girl. As with Megan Nicole before you, Spotify’s all yours now. EAT.

I don’t know, Tom. I’m probably going to still listen to a Taylor version of “Welcome to New York” on YouTube, but your effort is inspiring.

The point is, people, we don’t need Taylor Swift anymore. I hope all of this has made that point explicitly clear.