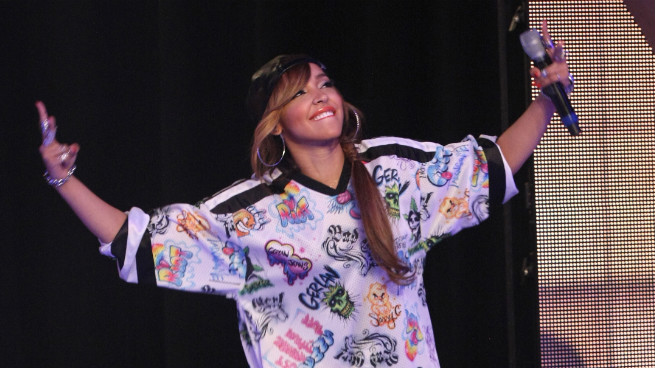 Kristeen Young, “Pearl of a Girl”

This week, Kristeen Young went on The Late Late Show With Craig Ferguson and shredded through her jam “Pearl of a Girl” with Dave Grohl (who actually played drums on her whole new album, The Knife Shift), the similarly legendary Pat Smear, and then, of course, Megan. Exhilarating stuff. A few more runs like this and no longer will Kristeen be known as The Girl Who Maybe Got Morrissey Sick Once — she will, forever, be known as The Girl With Fluffy Floaties.

The New Pornographers, “War on the East Coast”

Fifteen years deep, and six albums in — how dare the New Pornographers still be this good. Bonus points for A.C. Newman, with a few clipped hand-jabs above, reinventing the whole gesticulation game, and for Dan Bejar, in silent trench coat glory, becoming quite possibly the most louche person alive.

First his surprisingly adept SNL hosting gig, then this week’s atypically rousing ESPYS night, and it’s time to face facts: The moment when our grandchildren look up at us — with their genetically engineered radiation-proofed retinas, amid the battered, scorched hellscape that we once knew as planet Earth — and ask “Drake was a rapper once?” is inevitable. I mean it: Sooner rather than later, Drizzy’s multi-hyphenate master plan kicks in for real, and we’ll look back fondly on the days when arguing about the peculiar merits of his heartbroken oversharing was something we did on the regs. Let us, then, for now, enjoy Drake being Drake. “Who do you fuck in this city when I’m not there?” [Applauds.]

The latest video from Perfume Genius (whose new album, Too Bright, drops in September) is a wonderfully, breezily odd up-till-dawn nightmare, full of all-white drop-tops, baby pigs, mysterious leg prosthetics, interrupted business meetings, and the kind of spontaneous feather combustion that’d make young Sean Combs’s eyes well up. The part when they smash up the computer room did kind of bother me, though. Those kids are gonna be so bummed tomorrow when they find out they can’t play Minesweeper.

Here goes some recently unearthed footage of Baby Yeezus, grabbing the mic at Fat Beats, the late, lamented NYC hip-hop shop. So much has changed: new haircuts, new flows, new yellow polos, new references to Alanis Morissette. But then, at one point, Kanye claims he stole his style “from the future,” and it all feels so warm and familiar.

Feeling hype now? Take a nice cold shower with the chilly zones of Brooklyn’s Courtship Ritual, whose debut album, Pith, is now available for your consumption. This is “music to daydream about renting a bouncy castle for your adult birthday” to.

Thirteen years ago, Boston’s American Hi-Fi had a minor radio hit with the irresistible pop-punk throwaway “Flavor of the Weak.” Thirteen years later, it’s still at it, still providing the kind of slick good-clean-fun riffs that’ll make you wanna call up at least the first half of your contact list and see if anyone’s interested in a pajama party. I’m pretty sure this is exactly what Churchill was talking about when he said “Never, never, never, never — in nothing, great or small, large or petty — never give in, except to convictions of honor and good sense.”

To follow up the ever-lovely “2 On,” Tinashe grabs TV on the Radio’s Dave Sitek and keeps the party vibes simmering at a medium heat. TBH, “Feel it up my spine like a xylophone” feels a little first draft–y, but ultimate respect for attempting to sex up the most historically staid of the idiophone family of instruments.

Go ahead. Pick some flowers. Catch a matinee of Edge of Tomorrow in the last theater in town still showing it. Ride on your enemies. Enjoy the weekend.