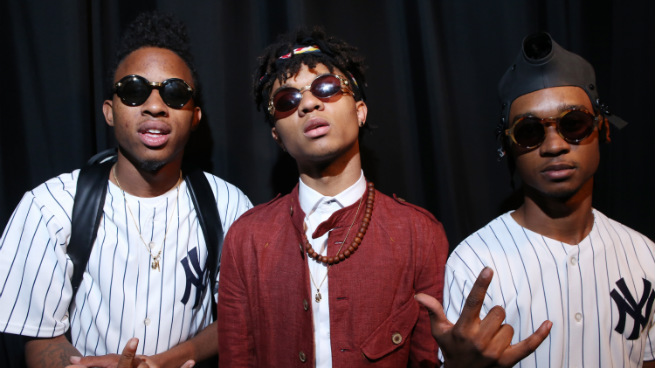 Much like Michelangelo after the Sistine Chapel, Rae Sremmurd must now ask themselves: Where does one go after perfection? “No Flex Zone” was an immaculately breezy summer jam, and we’ve been crafting shrines to it in our closets all summer. But now, with this lovely ode to inclusivity — “I don’t got no type / bad bitches is the only thing that I like” — the Mike Will Made It–put-on Mississippi brother-duo is on to the next one. Things on their mind: “living like a bachelor,” “cups with the ice and we do dis every night.” No particular beverage, nor type of ice specified, though. Cubed or crushed, Rae Sremmurd? Cubed or crushed?

18-year-old Atlantan musical polyglot Raury tapped the Internet on the shoulder with “God’s Whisper,” and he’s now back to break us off proper with his first full-length, Indigo Child (explains Wikipedia: “Indigo children, according to a pseudoscientific New Age concept, are children who are believed to possess special, unusual and sometimes supernatural traits or abilities”). He’s signed to Columbia, already worked with Danger Mouse and had breakfast with Kanye (says the New York Times: “they played new music for each other”) and is opening for Outkast, and, oh yes, is only 18, so is basically on a goddamn rocket ship to the moon right now.

Das Racist’s Heems is back with a new collaboration, this time with a British actor/musician named Riz Ahmed, of which he says: “My being a New Yorker of Indian descent and his being a Londoner of Pakistani descent kind of just connects the dots in a certain way. Historically this is two countries and two groups of people who have never gotten along. It was just a cool idea for us to come together.” (For more of that inimitable Heems hot sauce, check out Zach Dionne’s excellent recent profile.)

This semi-conceptual collaboration, from mysterious Brit producer Sophie and fellow dance-scene presence A.G. Cook, comes to us via the esteemed XL Recordings and so has cool-kid bona fides while sounding like crazy-person “Barbie Girl.” Sound of the future or unholy abomination?

The Both, “Volunteers of America”

Aimee Mann and Ted Leo’s supremely catchy collaborative project The Both has a new TURNED UP (in a suburban backyard party kind of way) video, and our buddy Daniel Ralston directed it! No, he didn’t take my note on a dinosaur that can only eat Dunkaroos, but it’s still great.

Toronto R&B’er P. Reign is like OVO third-string at best — so how the hell does he get himself this good of a (Future-assisted) Drake hook? Because DRIZZY’S GOT ’EM FOR DAYS, MOTHERFUCKERS.

Haynie’s a longtime hardworking producer with a healthy credit roll: Ghostface, ’Ye, Eminem, Lana Del Rey, Kid Cudi, … um, Gym Class Heroes. Now he’s going for the spotlight and has called up pals Dev Hynes, Charlotte Gainsbourg, and Sampha (taking time off his usual tag-team work with SBTRKT) for the assist on “A Kiss Goodbye.” On only the most tenuously related note: Geena Davis killed it in The Long Kiss Goodnight, and that’s not up for debate.

3:30 in the morning in the hotel room hallways, just you and your buddies and a little tiny bit of rotoscope and a beat built out of the sounds of a gerbil tripping on a Casio keyboard = best party ever.

Who’s done more for humanity at this point, ethereal power-hitting chanteuse Zola Jesus or actual Jesus? Yeah, sure, it’s still actual Jesus. But the fact we’re even having the conversation …

Wait, Bobby Shmurda just dropped off the reggae remix? And it’s got everyone on it? Eat shit, Labor Day, the summer’s not over. It’s only just begun! Now if you’ll excuse me, I need to go yell “IF IT AINT ABOUT THE SCHMONEY WE AINT TOUCHIN’ IT” at my neighbor’s cat.

Heart of Dankness: Touring Ruins in ‘As Above, So Below’ and ‘The Trip to Italy’