The Last Best Show: Talking to Tom Scharpling the Morning After His ‘Best Show on WFMU’ Finale 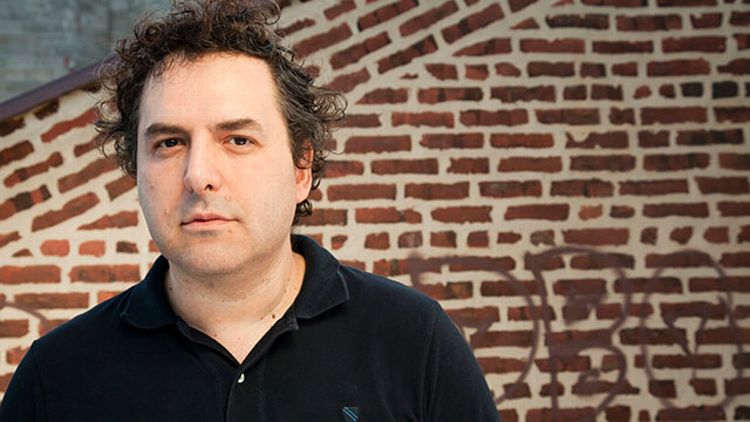 “The Best Show on WFMU,” the beloved cult comedy radio show, ended its 13-year run last night. The show has been eulogized, summarized, and canonized over the past few weeks, and host Tom Scharpling’s faithful legion of fans have shown an outpouring of love over social media. Newcomers to Tom’s weird and wonderful radio universe — the razor sharp rants, the callers (both great and terrible), and most notably, the wide range of characters performed by Superchunk drummer Jon Wurster — have had plenty of primers to get them up to speed (as well as the full show archives at their disposal on the station website). While the show often features notables like Patton Oswalt, Aimee Mann, or Ted Leo, last night’s finale featured no guests, just Scharpling and Wurster doing what they do best: creating a world of weird and hysterical characters in their fictional town of Newbridge, New Jersey. In the final 15 minutes, for the first time in the show’s history, Jon Wurster appeared as himself, joining Scharpling in studio, where they talked as friends.

Tom and I co-produce and co-host the music podcast Low Times along with Maggie Serota. He has been both a collaborator and a friend (as well as a groomsman in my wedding). I spoke to him the morning after his final show to check in on his state of mind after ending his epic run with WFMU, and to find out what the future holds for him.

What was your drive home like last night? Can you take me through what you were thinking and feeling?

The drive home last night was great. Basically, it felt like a huge relief. As soon as I had decided that I was going to end “The Best Show” all the way back in January, I kept thinking of how and what the final show would be. And as it went from something that was theoretical to a frighteningly real thing that I was going to actually have to do, I started to feel a lot of pressure. I really wanted last night’s show to somehow encapsulate 13 years while still being a real show. So having the show come together like it did felt like a backpack being removed from my back. I was wired and excited about how it went, but mostly relieved.

It sounded like your final remarks were off-the-cuff. In all the planning and consideration for the final show, did you feel like you wanted your last moments on WFMU to come from the heart? Was that a conscious choice?

I had been thinking about what I wanted to say for the end of the show, and I kinda wanted it to wrap up the way the whole thing began — me alone in the room talking into the mic. I thought about writing something out, but at 6:30 I just sat down and made some notes, just to make sure I wouldn’t forget anything too big in the heat of the moment. I didn’t spend more than a half hour on the notes, but all of those things that I said were things that I had been thinking about for a long time.

And did you always know that you wanted Jon to be there with you in the studio at the end?

Yeah. I really wanted him to be able to step out of character and get the credit for everything that he’s built. He never gets to do that when he’s in character. And besides, talking to him is one of my favorite things ever, so getting to do that on the air for the first time was something important to me. All of the stuff we create comes out of the two of us just talking like that.

That part is so remarkable to me — the amount of work that goes into your calls together. The calls feel so lived-in and informed by your natural rhythms, but you guys put down so much on paper before Jon calls you. And the final show featured some of your best-loved characters, like Philly Boy Roy, etc. If you had to estimate how much planning went into the final show, what would you be looking at?

It’s hard to say. Jon and I talked about what the final bits would be for well over a month. And there were five people helping pull sound clips from the 13 years of the show for the audio collage. I have no idea how many actual hours, but it was a lot. I went into that show last night wanting it to be perfect, but that’s an impossible goal. So I was kind of glad when I flubbed a cue on a record in the opening set and then had a technical problem with my headphones. Because after that it was impossible for the show to be “perfect.”

Tell me about the decision to not include any in-studio guests for the final show.

As we were building up to the final show, I decided that we would have the second-to-last show be some version of the in-studio guest/all-star episode. But I wanted the final episode to be representative of what people would actually tune in to hear every week. If we did in-studio guests, it would’ve ultimately been a wake for the show, with everybody talking about what the show was to them. I wanted the final show to be an actual episode, not a retrospective.

Speaking of those outpourings … there have been dozens of loving looks back at the show over the past few weeks. Did you read any of that stuff?

Oh yeah, I have skimmed a few things, but on the whole I made a point about not reading anything. Maybe now that the show is over I can go back and read everything. It was hard enough staying inside this weird bubble of unreality doing the show with everybody knowing it was ending. So I was trying to keep my focus on the actual show, not the legacy of the show or anything like that.

I can’t think of anything in the modern era of comedy that has inspired the kind of loyalty “The Best Show” has. There were listening parties in just about every major (and minor) city last night. People were on Twitter posting their “Best Show” tattoos, artwork, pictures with you and Jon, etc. Every single audio stream WFMU offered was completely overrun last night and the fans did everything they could to help each other out. People were livestreaming their radios so that others could listen!

Yeah. It was insane. The magnitude of this whole thing caught everybody off guard, including me. I am still just blown away by the level of support and love that has been sent our way over the last month. And last night was like being in a waking dream.

In your final moments on air, you talked about the show continuing in some different iteration and realizing that this show is “what you were put here on earth to do.” I know you’ve been clear about the fact that the world you’ve created with Jon is not dead. As you take time to reflect on the show, and see this overwhelming outpouring, has it made it easy to see where that path forward is?

It’s easy in a larger sense, like “This is what I’m supposed to be doing.” But the hard part will be figuring out how it goes from being a concept — “we should do what we’ve been doing but get paid for it” — to becoming a reality. I really hadn’t planned anything at all, because for starters, what doing the show truly means to me hadn’t immediately hit home, but mostly because I didn’t want to compromise what it meant to end this show fair and square. We did 13 years of shows and I wanted that accomplishment to stand on its own, not to feel like some sort of opportunity to tee up the next chapter.

That makes sense. OK, this is the part where I get sensational … did you cry at any point last night?

No! I was ready to cry. I thought I could get through it without crying, and I more or less did. I got a little tight in my final good-byes, but I held it together. Although when I heard the beginning of the music for “Thank You” by Led Zeppelin and “The Ballad of El Goodo,” I knew I could start crying if I focused on it. But I still had a show to do!

You ended the show on an all-time great fakeout (the playing of one of your all-time least favorite artists, Tom Waits, before stopping the record and ending the show with “Gimme Gimme Gimme” by Black Flag). Knowing you, and knowing the amount of care and attention you put into the music on your show, why did you decide to go out on that one?

I guess by that point I had figured that the show had enough sad and emotional moments in it. And so much of the spirit of the program has been getting pumped up and ready to get into it — I play stuff like Black Flag before the show to get myself ramped up — so I wanted that spirit represented somewhere. And to do it at the end was funny to me; the classic move is to pick a weeper on the way out the door, but it’s like “We’ve got some fighting left to do, so let’s get fired up!” And “Gimmie Gimmie Gimmie” is about a guy with nothing to do but shoot his mouth off, which I can relate to.

Daniel Ralston (@danielralston) is a music video director, comedy writer, and co-host and co-creator of the Low Times Podcast.