Songs of the Week: Pop the Vote — Listening to November 6 and the Morning After 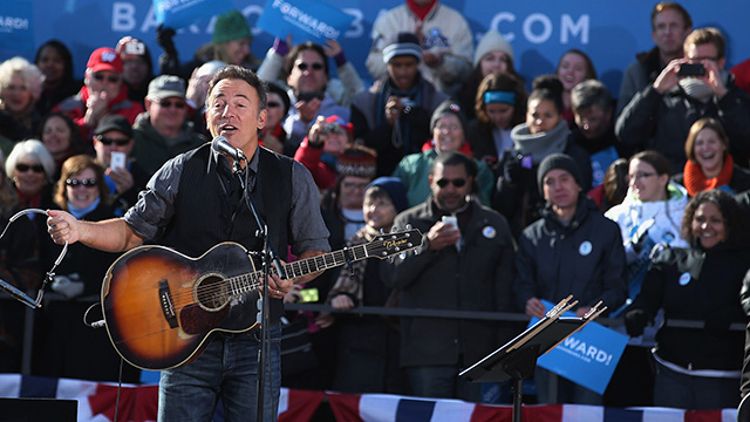 Election night afternoon. Focusing on anything else is futile, but I try anyway. I play half of the first Tom Tom Club album in my office; when my nerves demand something stronger I start banging sense-annhilatingly well-constructed radio singles instead. For the last few weeks I’ve been looping “We Are Never Ever Getting Back Together” like a Consumer Reports lab tech trying to wear out a tire, so I do that again, and then I play fun.’s “Some Nights” (Freddie Mercury ghost-riding an REO Speedwagon over Bow Wow Wow Burundi-beats) and then I play Ke$ha’s “Die Young,” which is basically a weaponized “Teenage Dream” with bubblegum-L’Trimm rap verses as value-add, i.e., it’s amazing, maybe the pinnacle of a really good year for the-club-is-a-battlefield Hunger Games pop songs.

Around 5 p.m. music writer Maura Johnston links to an election-night Spotify playlist of Van Halen and solo David Lee Roth and I skip around in that for a while. “Dance the Night Away” feels like a jinx — too celebratory, too soon — but Roth’s Lovin’ Spoonful cover “Coconut Grove” makes for weirdly soothing background noise as I refresh and refresh and refresh the red-and-blue map on HuffPo. Diamond Dave’s desire to be alone with his lady on a sand dune is relevant to my interests.

I’m still getting used to experiencing events like this on Pacific time. Obama has it in the bag before I have time to pour the stress-cocktail I’ve been looking forward to all day. I toggle back and forth between ebullient MSNBC, Karl Rove spin-cycling through the first three Kübler-Ross stages on Fox News, and CNN.com’s live feed from Obama headquarters in Chicago, where somebody named DJ Mel, from Austin, Texas, is spinning familiar campaign-approved jams. Rolling Stone‘s Rob Sheffield, on Twitter: “‘Groove Me’ into ‘Mr. Big Stuff’ — this is the Paul’s Boutique of presidential-acceptance-speech soundtracks.”

Nearly everybody on my feed not joking about Nate Silver’s 10,000 percent chance of getting super-laid tonight spends the run-up to the speech throwing out suggested walk-on songs for BHO — “Back in Black,” Future’s “You Deserve It,” Rick Ross’s “King of Diamonds,” that “Hold Me Back” remix with Lil Wayne on it, Lightning Bolt’s “Crown of Storms.” Instead we get the hits — Stevie Wonder’s “Signed, Sealed, Delivered” as fanfare and then Springsteen’s “We Take Care of Our Own” for the confetti-gun portion of the evening. “Signed,” the first Stevie Wonder single produced by Stevie himself, has been an Obama-event staple since the 2008 campaign; it was supposedly David Axelrod’s custom ringtone when Barry called. It still chokes me up in this context, and even though Bruce is generally a whistle I can’t hear and always has been, so does the Springsteen.

So Bruce wins this election year on same-as-the-old-boss momentum, but only because there wasn’t much competition. Jeezy, Mariah Carey, and Sufjan Stevens all checked in with late-breaking downloads addressed to their respective constituencies. Ry Cooder and Randy Newman drolly trolled right-wingers with satire-as-usual. Kanye pointed out that “Mitt Romney don’t pay no tax” on “To the World.” The two best songs mentioning a Republican politician by name were Killer Mike’s merciless “Reagan” and Titus Andronicus’s “Tried to Quit Smoking,” which is about the futility of writing fuck-Reagan songs in the 21st century. Entertainers on the other side of the spectrum kind of sat this one out, too, Hank Williams Jr.’s encyclopedically pissed-off “Take Back Our Country” (hot darts for Obama and the EPA and also “Facebook, Twitter, YouTube, and Bing!) and Kid Rock’s shartbeat-of-America base-energizer “Born Free” notwithstanding.

Even if you cast the net wider, reading chart pop like “Die Young” and “We Are Young” and “Born to Die” and “We Found Love” as odes to terror-sex on the eve of economic no-future and “Gangnam Style” as a dis song aimed at our 1 percent as well as South Korea’s, that’s barely enough for an ELECTION 2012 JAMS mixtape, although I guess you could pad it out with Silversun Pickups’s “Panic Switch” and something from that iPod Paul Ryan couldn’t stop talking about — AC/DC, maybe, or small-government crusaders Rage Against the Machine. Has any candidate ever gotten less mileage out of liking cool music than Ryan did? At least he dared to suggest that the Republicans need not be the Party of Nugent forever.

In the morning, dutifully, I put on KCRW for a warm buzz of post-election NPR and leave it on when I go take the kid to school. When I get home, “Morning Edition”‘s given way to “Morning Becomes Eclectic,” and for some reason Jason Bentley’s playing “Strange Days” by The Doors. There’s a great chapter in Greil Marcus’s book The Doors about “Strange Days” and the way it fails to live up to the unearthly promise of its first few bars — the part where it sounds like Ray Manzarek is beaming an inside-out version of the Twilight Zone theme into space. I haven’t listened to this song on purpose in years; for a second the Leslie effect on Morrison’s vocal sounds like such a superfluous touch I’m convinced I’m listening to a remix. Morrison sounds like a drunk man moaning from a carousel.

“Strange Days” turns out to be part of an oddly defeatist rock block that also includes the White Stripes’ “Dead Leaves and the Dirty Ground” and the Damned’s “I Just Can’t Be Happy Today” (“The radio’s on ice / The telly’s been banned.”) It’s like Bentley had a really killer “Morning After Obama Loses” show all planned out and didn’t want it to go to waste.

My one musical memory of 2004 involves Iron & Wine’s cover of the Flaming Lips’ “Waiting for a Superman” — it came up on shuffle as I walked to the subway on the first morning of Bush’s second term, and I let it play, just to really bite down on the toothache. And in 2008 all I wanted to hear was “My President Is Black,” Young Jeezy’s dirty-bird dance in the end zone of history, preferably loud enough to crowd out all doubt. Sometimes you find your election-year jam, sometimes it finds you. In the absence of a better option, I cue up “Some Nights” again. It’s a ludicrously triumphant song whose underlying message is Now what?, and every single time I play it, it simultaneously fills me with excitement and makes me feel ashamed of how easily manipulated I am. I feel like a mark; I sing along anyway.

Filed Under: Bruce Springsteen, Songs of the Week, Young Jeezy

Video on Demand Report: Lizzy Caplan and Alison Brie in Save the Date, Steve Austin and Steven Seagal in Maximum Conviction

Trailers of the Week: Les Misérables, The Grandmaster, Side Effects, and More