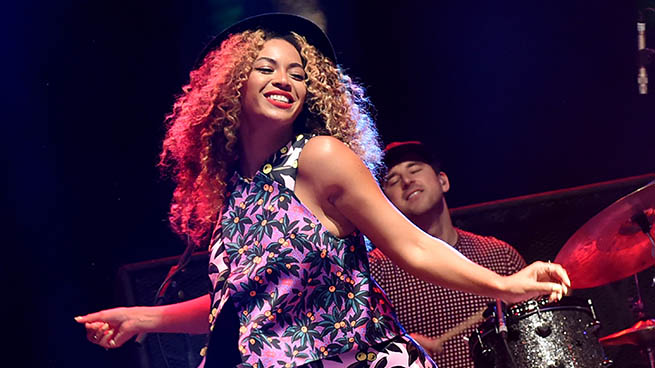 Particularly big week for the ever-present/ever-welcome Beyoncé Knowles: She covered Time’s 100 Most Influential People issue, in which she got a fawning ode written by none other than head lean-in’er Sheryl Sandberg; she also proudly announced herself as a #hashtagactivist with her #whatispretty query (and the “official release” of the “Pretty Hurts” video, which, yes, we’ve all already seen). And in the midst of all that, she also managed to hop on a track with her buddy BOOTS, the no-longer-so-mysterious producer who had a big hand in shaping her self-titled masterwork. Take a lesson, regular people: Timeless icons know the value of being a good friend.

Merrill “tUnE-yArDs” Garbus is back with more nonsense hot-sauce pop for ya: Her new album, Nikki Nack, is streaming at NPR right now. You can either listen to it super-loud, or spin around a bunch of times in a circle then do two sets of Nic Cage–in–Con Air–headstand-push-ups then perform a close reading of a Claymation Haggadah. The results will be roughly equivalent.

Courtney Love, “You Know My Name”

In a new video off his @MCTreeG EP, the soulful Chicagoan trades his (metaphorical) backpack for a suit and tie, lights a smoke like Dean Martin, then hangs off the mic and plinks around on the piano. Related, but only in the loosest sense of “people comparing themselves to deities” kind of way: Why don’t we take this moment to appreciate Tom Wilkinson, god of death?

Tonight, the Tribeca Film Festival’s Fifth-Annual Disruptive Innovation Awards will honor, along with Amanda Palmer and Levi’s president James Curleigh and Fuck Cancer founder Yael Cohen … the Roland 808 drum machine?? Also: “Rick Rubin and Kanye West will be not be attending this year’s awards, but will be shown live at the event accepting the Roland 808’s award for contribution to hip hop.” And there is absolutely nothing wrong with any part of the statements above. Even better? At least until the nefarious forces that be pull it down, a ’Ye and Rick “acceptance video” — chopped and modified, by Mark Romanek, in the spirit of the 808 — can be seen right here.

[protected-iframe id=”8fb0367614d4bbc24817c1587c56b763-60203239-16586585″ info=”http://videoplayer.vevo.com/embed/Embedded?videoId=USRV81400051&playlist=false&autoplay=0&playerId=null&playerType=embedded&env=0&cultureName=en_us&cultureIsRTL=False” width=”540″ height=”304″]
The diligent A$AP Mob is graduating from mixtape status, with the imminent release of proper studio album L.O.R.D. There’s still no official release date for the project, which has been yanked around a bit, but we do get this nicely woozy clip pushing young Twelvyy out in front of the pack. This is exactly the kind of grimy-hangout rap video that has convinced, and will continue to convince, fleets of suburban children to one day move to New York.

[protected-iframe id=”8399255b781b5935e93f397567995a3f-60203239-16586585″ info=”http://videoplayer.vevo.com/embed/Embedded?videoId=CYA111400009&playlist=false&autoplay=0&playerId=62FF0A5C-0D9E-4AC1-AF04-1D9E97EE3961&playerType=embedded&env=0&cultureName=en-US&cultureIsRTL=false” width=”540″ height=”304″]
Tiësto was an EDM superstar before the genre took the mainstream, and has watched a whole generation of fledglings come up under his implicit tutelage and take over headline status; it’s only right, then, that he now tries his hand at a bit of crossover ubiquity of his own. This single comes off his perfectly doofily named new album, A Town Called Paradise, and gets a secretly sad but saccharine-sweet chorus courtesy of a young man named Matthew Koma, who’s often available for these kinds of EDM-goes-pop-whether-you-like-it-or-not affairs. (Also: He at one point dated Carly Rae Jepsen?!) Anyway: “Wasted” certainly has “inescapable” potential; take it in now, before it begins triggering Pavlovian gag-reflex-type reactions.