So, Those Oscar Nominations Were … Interesting 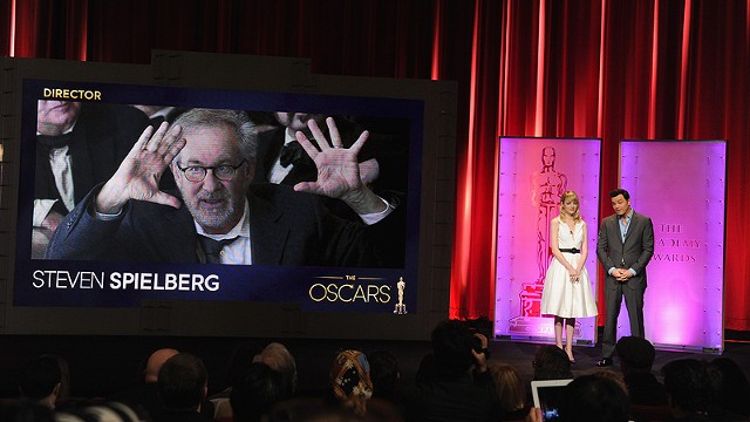 You can be honest. When Seth MacFarlane and Emma Stone announced the Oscar nominations this morning, you were nervous they were going to go all Baseball Writers’ Association of America and say, “This year there are no nominees.” Of course, if you’re Ben Affleck or Kathryn Bigelow or even Tom Hooper and Quentin Tarantino, isn’t that kind of what happened? 2012 was a strong movie year, and that’s pretty much demonstrated by the dozen or so legitimate candidates for the five directing slots, two of which, at least, seemed preordained for Affleck, who made Argo, and Bigelow, who made Zero Dark Thirty. But when the names of Benh Zeitlin (Beasts of the Southern Wild) and Michael Haneke (Amour) and David O. Russell (Silver Linings Playbook) were called alongside Steven Spielberg (Lincoln) and Ang Lee (Life of Pi), somebody in my one-person living room turned into the Retta Twitter feed and said, “Oh, no they didn’t!” But they did. And what did they do?

For one thing, they surprised an industry that might not be as conventional wisdom–oriented as the people who watch that industry assume they are. They surprised it with three unobjectionable, arguably inspired choices. The high quality of the year also means that maybe the numbers were probably close and spread across a wide field of directors. I mean, Spielberg’s been shut out before, and when that happens people speculate about What It Means. But this year, in the cases of Affleck and Bigelow, I’m not sure it means more than “only five names can make the cut.”

Academy nominating is done by branch. So actors nominate actors, directors directors, composers composers, and everyone chooses Best Picture candidates. And I’m always amazed that there aren’t more close calls or outright shocks like this. I mean, what we’re talking about is several hundred people choosing among a handful of options. The margins have to be thin enough for the Afflecks of the world to miss the cut and for a first-time filmmaker working with almost no money, like Zeitlin, to make it. (The grad-student headache/survivor-fantasia that is Beasts will have to be a subject for another day.)

It might be easier to look at Zeitlin’s, Haneke’s, and Russell’s nominations and surmise that the enthusiasm for them was greater than anticipated. The taste the Academy has acquired for Russell is wonderful on the one hand and annoying on the other. Where were they for Flirting With Disaster and I Heart Huckabees? Of course, if we’re going to read anything into this, it’s also possible that it could be a matter of outlook. The five movies represented in the directors branch — Amour, Beasts of the Southern Wild, Life of Pi, Lincoln, and Silver Linings Playbook — are, in their separate ways, good-news movies. Lincoln opens on a battlefield and one of its endings involves news of the president’s assassination, but, hey, the 13th Amendment passes and the freed slaves are made citizens! Three of the other films affirm life, and Amour affirms the endurance of love.

But those movies contain no unresolved moral messes for an audience to wrestle with, unlike, say, Zero Dark Thirty, which has been dogged by the torture question, and apparently and sadly that buck stops at Bigelow, whose even hand and mastery of dramatic tension make the movie. It’s just amazing that she wasn’t on enough ballots. There are even greater terrors in Django Unchained, but I think the older white men of the directors branch didn’t find Tarantino’s slaughter of slave owners palatable enough to commend him for it. You get the feeling voters were filling out their ballots and asking themselves, “Why can’t Tarantino be more like that nice Stevie Spielberg or this Zeitlin kid?” It’s one thing to create a revenge fantasy that climaxes with the point-blank extermination of the Third Reich, as Tarantino did in Inglourious Basterds, for which he was a director nominee. It’s quite another to set a former slave loose to assail his attacker. That’s a fantasy too far, apparently. Plus, if Django would have waited six or seven years, he could have just been freed by Lincoln.

As for Ben Affleck, I think he’s made directing look too easy for himself. He’s so good with commercial entertainment that his talent might look too facile and artless up against the very good Ang Lee and the great Michael Haneke, two artists. Who knows? Then again, these are old people who remember stuff, and maybe with Affleck they’re remembering their dear actor-writer-director friend Warren Beatty, who might have just been over last week. Either way, “Argo fuck yourself,” indeed.

The morning proceeded with a twist of shtick. MacFarlane and Stone bantered in an admirable but grating way that made you feel the 5:45 a.m.–ness on the West Coast. After announcing that the Supporting Actor nominees are all previous winners, MacFarlane quipped that it was a “breath of fresh air in that category.” There were no surprises in that category — and there will be many weeks to wonder about the appeal of Arkin in Argo and to ponder the enthusiasm for the least morally and socially complicated character in Django Unchained. But it’s nice to see the actors branch continue its tradition of embracing young non-professionals of color, which unions like the Screen Actors Guild can’t do. So 9-year-old Best Actress contender Quvenzhané Wallis, next year, pay your dues. She joins past “previously unknowns” like Keisha Castle-Hughes and Gabourey Sidibe in the fight to keep working after February. I wish her luck.

Coming into the morning, we appeared to have a four-movie race. But with Bigelow, Affleck, and Tom Hooper, who directed Les Misérables, sidelined — and unless The Weinstein Company can mount a momentum-stopping campaign — the contest has come down to one film, and it’s Lincoln, an excellent, very popular movie by a great director on a subject that inspires, uplifts, redeems, does the laundry, pays the bills, makes dinner, and picks up the kids. It’s the perfect Academy movie and the perfect spouse, too. But we have seven weeks to think about that, recover from the seismic shock of two of the Oscars’ greatest disses, and wonder how today might have gone if he had just spelled it “Benh Affleck.” Stay tuned.

The Haylor Breakup, Mariah Carey's 'All-Purple Diet' ... and Other Absurdities From This Week's Tabloids