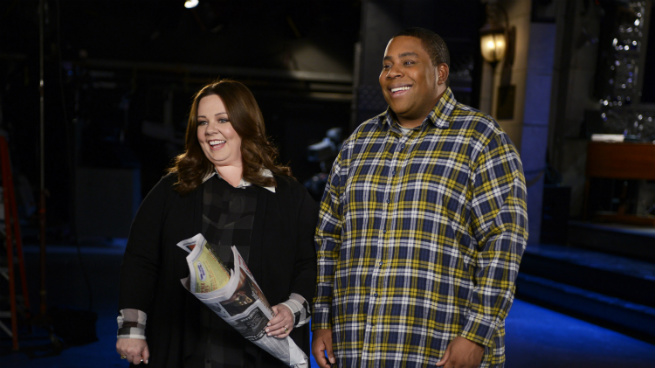 Remember when Jennifer Lawrence hosted SNL a little over a year ago? The ’50s diner? Top Chef for dogs? Still not helping you out, am I? That’s because the episode — despite featuring a wonderful, likable, talented, and funny host — was not very good. The only moment to look back fondly on is “Danielle,” which is one of those sketches that I felt may have appealed to only me and maybe a hundred other viewers. It was Lawrence’s first time hosting, and I assumed the problem was that the writers didn’t know quite what to do with her as a sketch performer; as for Melissa McCarthy, who hosted this weekend’s show with Imagine Dragons, I think the problem may have been that the writers thought they knew more about where she fit, and what she could do, than they actually did.

McCarthy first appeared in the cold open, a Super Bowl halftime spectacular that replaced no-shows (blame the polar vortex) Bruno Mars and the Red Hot Chili Peppers with “some of the best and brightest of Broadway,” including a characterization of Peyton Manning (Taran Killam) in a fitted sequin jersey. As Mama Pass, McCarthy played a quarterback coach with a head scarf full of wisdom: Just bring the “whomp-whomp.” I liked McCarthy’s Broadway sway, but there was a lot of unoccupied joke space that could have been filled there.

The monologue was better. McCarthy has hosted three times, and following her second show, she apparently fell victim to a bit of a diva attack. Bobby Moynihan interrupts her monologue with evidence in the form of (you know, fictional) footage of her behavior backstage last year: stealing a llama, sassing Lincoln, being a brassy b with fabulous hair. McCarthy takes on Moynihan in a wire-stunt battle, with the host performing somersaults and throwing ninja stars in his general direction. McCarthy as a diva was so good that it’s a shame she was stuck in variations on the crazy-lady role for the latter two-thirds of the night — yeah, she can wear sauce on her face better than anyone, but with a few bits that could have easily been chopped without anybody shedding a tear, why not get more inventive?

First, the good. As PJ, a member of a suburban women’s group that encourages vision-boarding, McCarthy played a distant, slightly scarier relative of Bridesmaids’ Megan: The goal she needs to accomplish to achieve her best life can’t be aided by taking more photographs, “slow[ing] down,” and emulating Jennifer Hudson, because she’s out to avenge her father’s death. She’s got the Ann Taylor blazer stuffed with knives, a box of “trophies” from her victims, and a laser trained on her chest — but at least she and the girls can agree yogurt is the bomb. McCarthy has a way of selling paranoia and drawing you by the hand into her character’s world of crazy that’s just so much fun.

“Guess That Phrase!” played McCarthy and Vanessa Bayer off each other excellently, with the former as contestant Kathleen (“Pass the mash!” buzz-phrase up-voter, currently residing at the UCLA medical center) and the latter as a mild sort of sadist who trains dogs to dance (“They hate it!”) for a living and shades her daughter on air. Popping invisible balloons and singing Journey are never a bad way to go.

A takedown of Representative Michael Grimm’s outburst needed more than just a Weekend Update jab, so it was great to see the show cook up something so thinky (what do you do when you’re having an angry meltdown and you can’t run away from surveillance?) to tackle it. McCarthy played Sheila Kelly, a freshman congresswoman from Delaware with even worse manners than Grimm. She goes from dimpled head shot to laughing maniac stealing a police car in minutes, and she commits to her rage spiral excellently.

Two sketches failed McCarthy, however. On another installment of “Girlfriends Talk Show” with Morgan (Aidy Bryant) and Kyra (Cecily Strong), McCarthy is stuck playing a woman discovering her single, mingling self with a Hawaiian stud named Pua. The joke seems to be that … she’s having sex with a guy who drinks Pepsi and makes her orgasm? But still, that wasn’t as bad as the museum tour, in which McCarthy interrupts an art exhibit with an actor (Nasim Pedrad) posing as Frida Kahlo and likens her to a Latino Bert from Sesame Street. A modern-art bitch fight ensues, but ideally you’d already excused yourself to grab a snack by that point. This is by no means McCarthy’s fault — my theory is that the air was sucked out of the writer’s room due to it being Seth Meyers’s last show — I just wish she’d been given more to work with.

Speaking of Meyers, his good-bye (preceded by an appearance by Killam as Atlanta storm survivor Buford Calloway, bitching about “Connecticut confetti,” a.k.a. “New England clam powder,” a.k.a. snow) was dignified and worthy, especially if you consider that his last joke on the show was about a guy in a weed hat. His co-anchor, Strong, was emotional, and after appearances by Stefon (Bill Hader), Amy Poehler, Andy Samberg, and Governor Patterson (Armisen, who also obstructed the camera during Poehler’s final Update), so was he. Stefon consoled Meyers with a report on the amenities of post-SNL life, which include but are not limited to “human DVRs” (a midget who sits on your TV and recaps Scandal for you). Desktops were beaten with fists, and the Band-Aid had been removed. We now have a month to recover before the show comes back on March 1.