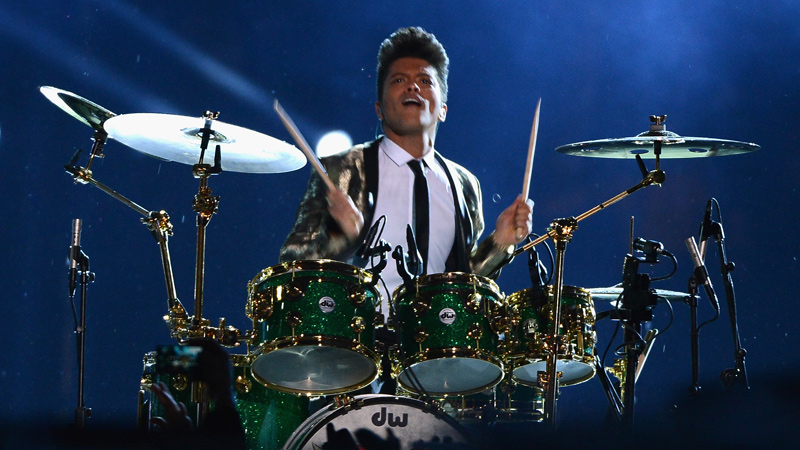 At last year’s Super Bowl, Beyoncé performed during the halftime show and people seemed to enjoy it. Our own Wesley Morris called it an “evening of flawless entertainment.” Following up flawlessness is no easy task, particularly when you’ve been described in advance of your own Super Bowl halftime gig as a “potentially risky experiment” by the New York Times.

Why exactly was Bruno Mars — an artist never before associated with words like “risky” and “experiment” — considered such an unorthodox choice as the musical entertainment for our top annual TV sports and pop culture variety show? “Compared with previous artists who have played to national television audiences of 100 million or more on the coveted Super Bowl stage … Mr. Mars seemed to lack the stature and longevity of these monolithic musicians,” Dave Itzkoff explained in the Times.

In other words, he’s not famous enough.

So, unlike Beyoncé, Mars was not going to be judged last night by his ability to approximate perfection. No, Mars’s standard was different but no less difficult to satisfy (for people who aren’t Beyoncé, anyway). A highly likable performer, prodigiously successful songwriter, and heavily nominated Grammy hound, Mars’s mission was to approximate star power.

“How did he do?” you ask, perhaps because you refuse to watch halftime shows headlined by pop stars who are insufficiently monolithic, and yet are still curious enough to read about these plucky extravaganzas the following day. Well, I’ll tell you. I compiled a stardom-level scorecard as the halftime show unfolded, and here’s what I found.

0:31 — So, there’s a children’s choir singing “Billionaire,” a 2010 hit by Travie McCoy cowritten by and featuring Mars. This is clever reverse psychology: Bruno Mars is such a big star that he can open the show with a song that’s not even primarily his. Plus, having a bunch of kids sing it subtly (but not creepily) conflates Mars with the King of Pop himself, Michael Jackson. (Stardom level: 6 out of 10)

1:02 — Mars finally appears, and he’s playing a Garth Algar drum solo over a backing track that references Baauer’s “Harlem Shake.” It makes more sense when you see it versus how it reads on the page, but not by much. This is a gesture that says “I’m talented” more than “I’m famous.” It’s the musical equivalent of showing the audience your license and registration. I don’t hate it, but real pop stars shouldn’t have to audition. (Stardom level: 3/10)

1:58 — A band comes onstage wearing suits that match what Mars is wearing. You typically only get that sort of showmanship on cruise ships. This is obviously better because there’s no accompanying gastrointestinal virus. (Stardom level: 4/10.)

2:08 — Mars finally launches into one of his own hits, “Locked Out of Heaven,” which was no. 1 for six consecutive weeks. This is a song that everybody knows, whether it’s via Mars or the band that “inspired” it, the Police. (Stardom level: 7/10)

4:24 — At the start of the ’70s soul pastiche “Treasure,” a person who is not Bruno Mars announces that “this is your opportunity to dance.” I feel like Mars should not be delegating dance announcements at this juncture. (Stardom level: 2/10)

5:40 — Mars and his band segue into the rocking Prince-like funk of “Runaway Baby,” and I’m reminded again of how silly it is that Mars would ever be considered a risk by the powers-that-be at the NFL. Mars might not have the pedigree of a Madonna, Bruce Springsteen, or Rolling Stones, but he is a skilled synthesist of the same classic rock, pop, and R&B sounds that derive from the eras when those oldsters were at their peak. Mars offers both the comfort of the familiar and the sexiness of youth and pop relevance. (Stardom level: 8/10)

8:02 — The Red Hot Chili Peppers are not great, but Mars’s ability to perform both as himself and in an Anthony Kiedis meat suit is nothing short of amazing. (Stardom level: 8/10)

8:32 — On behalf of Gen Xers everywhere, I want to apologize to America for forcing the Chi Peps into the halftime show because some of us don’t “get” Bruno Mars. I may not be part of this specific problem, but I’m not completely blameless. I have sentimental affection for Blood Sugar Sex Magik, mostly because “Breaking the Girl” reminds me of playing basketball in my friend Nick’s driveway in 1992. But not even nostalgia can excuse the wholesale shittiness of “Give It Away,” which is not as good as “Locked Out of Heaven,” to say the least. (Stardom level: 1/10)

11:06 — Co-opting the troops for your big finish tells me you’ve been studying Bono. Well done. You’ve made the corny “Just the Way You Are” critic-proof. (Stardom level: 8/10)

11:56 — Mars is alone onstage, there are fireworks shooting off in the background, and he looks comfortable with 200 million eyes studying his bouffant. You’ve come a long way, B. (Stardom level: 10/10)