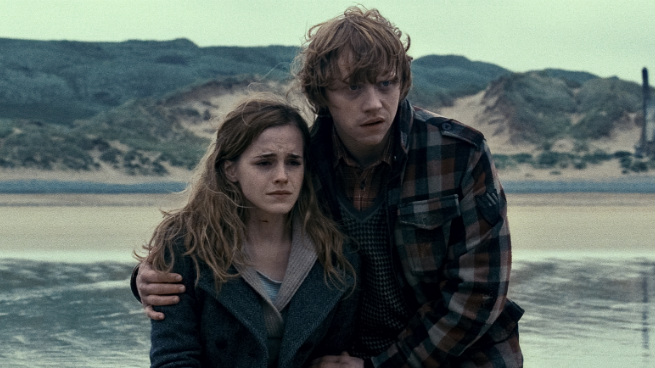 Now that the dust has settled from J.K. Rowling’s “Dumbledore was gay and you never knew!” bomb, it’s time for the next blast: Hermione Granger would’ve been better off with Harry Potter, even though she went and married Ronald Bilius Weasley. “I know, I’m sorry. I can hear the rage and fury it might cause some fans, but if I’m absolutely honest, distance has given me perspective on that,” Rowling tells Hermione actress/guest interviewer and editor Emma Watson in Wonderland magazine (via Variety). “It was a choice I made for very personal reasons, not for reasons of credibility. Am I breaking people’s hearts by saying this? I hope not.”

Ron Weasley, while a charming, bumbling, redheaded friend till the end, was no one’s real choice for Hermione. (Ready for the death threats to roll in over that bit of editorializing.) No one’s choice except Rowling’s, and even then it was out of a stubborn commitment to her planned storyline. “I wrote the Hermione/Ron relationship as a form of wish fulfillment,” she says. “That’s how it was conceived, really. For reasons that have very little to do with literature and far more to do with me clinging to the plot as I first imagined it, Hermione ended up with Ron.” Rowling is a well-known super-plotter; while writing Potter, she fashioned unbelievably elaborate spreadsheets charting basically everything that would happen to everyone. Her two non-YA novels, The Cuckoo’s Calling and The Casual Vacancy, display the same stringent dedication to airtight narrative.

Elsewhere in the complete Wonderland interview (which isn’t available online yet), Rowling says Hermione and Ron would likely end up in couple’s therapy. (Maybe that was all the death, destruction, mystery, and magic they encountered in their adolescence, though. Wizard War PTSD will knock even the most well-matched couples on their asses.) Emma Watson concurs, telling Rowling, “I think there are fans out there who know that too and who wonder whether Ron would have really been able to make her happy.”

It’s hard avoiding the creeping feeling that J.K. Rowling might spend the rest of her career echoing George Lucas’s sketchy revisionist tricks. The Dumbledore reveal came in 2007, after the seventh and final Potter novel was published, but before the final three movies came out. At the time, Rowling recalled redirecting a screenwriter who’d attempted to reference a former lady love of Dumbledore’s. “If I had known this would have made you this happy, I would have announced it years ago,” she said she told the writer. She told her fans, “You needed something to keep you going for the next ten years! … Oh, my god, the fan fiction now, eh?” The Hermione/Ron vs. Hermione/Harry gap is likelier to stir up fan wars than fanfic — no one needed Rowling’s permission to write hot honeymoon tales about the hyperintelligent, lovely wizard born to Muggles and the Boy Who Lived — but as long as Rowling stays away from any “Greedo shot first”–level B.S., the uneasy peace should stick.