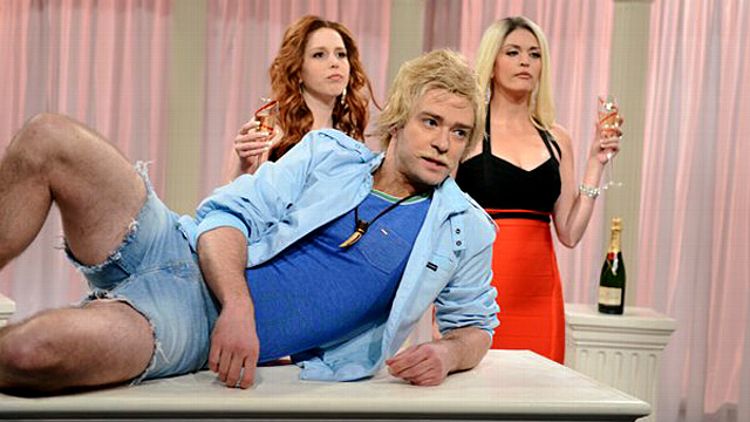 After I finished taking my SNL notes but before I sat down to write this recap, I decided to take the temperature on Justin Timberlake’s fifth ride on the host pony and check in with some of the other media responses to last weekend’s show. Despite the glowing tweets and my own enjoyment of this episode, some of the reviews were lukewarm at best.

Maybe people have reached the JT hype-saturation point? That’s understandable. I think that one of the reasons I loved this episode was the fact that Timberlake is the kind of performer you don’t have to worry about. As is the case with many vets, but particularly one who’s still in the golden career bubble of relevancy, you’re able to put aside any concerns about sweat stains, stutter fumbles, and any kind of projected post-one-a.m. anxiety attack that you imagine he or she will experience when thinking back on a particularly bad sketch. You can relax.

Saturday Night Live has a vociferous hater base, and besides that, live performances are just damn hard — and they look hard, most frequently when things just aren’t working out for either the musical guest or the host. In the case of insecure comedic entertainers or less-seasoned musicians (Lana Del Rey, Ashlee Simpson, Lindsay Lohan, Paris Hilton, Andrew Dice Clay, Steven Seagal, etc.), this usually results in an uncomfortable audience, and though it’s always kind of interesting to band together in a virtual cringe-fest, it also makes you feel squirmy in a bad way. As a viewer, you feel a mixture of pity, shame, and guilt for gawking. The jig heard round the world is a prime example of this. It’s very different when you know that, excluding horrendous natural disasters and terrorism and fainting spells and surprise stomach flu incidents, you’re in the hands of a pro.

This is not to say that Timberlake is the best actor of all time, or the best singer of all time, or that he had one of the best speeches of all time (of all time!), but that SNL is his niche. He’s a perfectionist, and there’s the sense that he takes care of the anxiety and preparation for you far in advance. Even though this episode mined the depths for JT mainstays and ancient artifacts belonging to a time when Lorne Michaels wore short pants (quoting an unimpressed colleague: “The two wild-and-crazy guys slowed down the dick-in-the-box guys”), Timberlake’s performance, both as a host and a musical guest, were pretty flawless. Did a slew of mighty laugh-machine robots storm the studio and shoot us with lasers until we were back in 2008, looking much younger and enjoying Digital Shorts and Kristen Wiig before she jumped the Gilly? No. The material was good (NuvaBling! Moey Chambon!) and though sketches occasionally painted themselves as Dorian Gray (welcome to Veganville), that wasn’t the point. Separating the host from the material is the central issue when you’re talking about the hits and misses of Saturday nights as a whole, and when one is exceptionally good enough to make you forget to bother with worrying too much about the other, I think it’s a success.

Timberlake appeared in the cold open as Elton John (is this a preview of things to come?) playing a tribute version of “Candle in the Wind” at Hugo Chavez’s memorial service. In a sequined turquoise jacket, Timberlake serenaded the ghost of Chavez, “quite a complex man” who was (actually) responsible for outlawing Coke Zero, increasing milk production, and claiming capitalism killed Mars. I liked this sketch just because I am now deep in the Chavez-Mars Internet hole. If you weren’t in the mood for a history lesson, the opening monologue probably wasn’t your jam: acknowledging the high expectations for his gig (“Thanks, Internet”), Timberlake decided to use his five-timers club card and entered a world of luminaries, including Paul Simon, Alec Baldwin, Candice Bergen, Chevy Chase, Tom Hanks, and Steve Martin (here’s the full list of five-timers, for your Jeopardy! preparation purposes). Martin Short and Dan Aykroyd were consigned to server positions. This sketch was actually a litmus test to determine if you are old enough or vintage-interested enough to get Three Amigos references and own a land line — if so, congratulations! Call me at home some time; we’ll twirl the cords around our fingers and use our imaginations to proto-Skype. I enjoyed the Joey Fatone dig courtesy of Steve Martin, as well as the moment when JT asked Martin if he and Chevy Chase were friends (“Exactly”). I’m sad that Bergen and Drew Barrymore are the only women in the five-timers’ club, and that Bergen’s joke was about leaving the toilet seat down, but I loved that Drunk Uncle got a shout-out when Taran Killam and Bobby Moynihan battled each other to the death for the enjoyment of the vets. At least we know Killam makes a good zombie.

“It’s a Date” featured Bill Hader as the host of the “only dating show still on TV,” in which three bachelors (or in this case, two pairs of bachelors and a singleton) tried to win eligible Judy’s (Vanessa Bayer) affections, sight unseen. Bachelor no. 1 was Moynihan, a regular old normie who was out of the running from the get (“I’m sorry, should I have brought a buddy?”) while bachelors no. 2 were the “Dick in a Box” duo (Andy Samberg and Timberlake) squaring off against bachelors no. 3, Aykroyd and Martin’s wild-and-crazy guys. It was a douche showdown filled with nightmarish scenarios from both sides (“both of us railing on your butt/Romance,” cuddling with Bayer’s “big American breasts,” “you can’t miss our bulges,” a very sound scientific theory that summertime is a natural contraceptive), but I think the combination rug dry-down and DuckTales marathon should have won it for Samberg and Timberlake. Bayer calls it a tie between “two and three and not one,” and then Hader does a modified sloppy swish as the scene ends. Ah, misogynist duos from yesterday and today. In 10 years, I hope we see them return and finally come clean about how their dicks were always boxed only for each other.

We didn’t get “Barry Gibbs Talk Show,” which is a crime, but at least the new incarnation of “Omeletteville” (see also: Homelessville, Liquorville, Plasticville) offered up a new possible slogan for veganism (“I Found Love in a Meatless Place”). I hope that after SNL put some spirulina in the Harlem Shake, it puts the Harlem Shake to bed and never wakes it up ever again. I’m done shaking. I’ve shook. As with Stefon (more on him later), I just don’t get sick of this premise. Timberlake singing his advertorial rendition of “Dancing With Myself” is so bizarrely confident considering the tofu brick outfit, so smooth, that I find it entrancing. I think that in less capable cartoon gloves I’d shy away from this, but it’s a testament to how good he is that I’m down for it every time.

I was also down for NuvaBling, the birth-control device that also offers a “mega dose of faboosh.” SNL’s range of takes on vaginal accessories, from the almost realistic (Annuale) to the futuristic (Woomba) always hit. Why? I don’t know. Maybe because marketing geared toward women is so often innately weird. May as well take Vajazzling to the next level and “shine up that ‘gine,” plus you can attach charms to it! So! You know! “And yeah, it does hurt.”

Timberlake transitioned to musical guest for his first song, “Suit & Tie,” which was not only awesome (the stage felt 10 times bigger than it usually does, packed with the Tennessee Kids, backup dancers, and Jay-Z), but featured a little Easter egg for anybody following the Kanye-JT feud. His second performance, “Mirrors,” was even better, but everything is always better with hand claps.

It was another good week for “Weekend Update,” with an image of an aging, bald Chewbacca and Hebrew playboy preceding an appearance from everyone’s favorite nightlife correspondent, Stefon. Where’s he been? Busy: “This job writing for Smash is killing me.” With plenty of giggle interruptions, Hader gave us a tour of the best clubs in New York, including “Your Mother and I are Separating” and “Selfie,” the name of which includes a mime of a duck-faced selfie — finally, a hot spot based on the novel Push by Sapphire. I hope he really does become Mrs. Stefon Myers one day.

The moment when I thought Timberlake really stepped up was in “Sober Caligula,” a sketch that I don’t think I would have enjoyed on any other week. After Caligula (Timberlake) hits bottom (“I woke up with my penis in the mouth of a dead lion, and I don’t even want to tell you where the lion’s penis was”) and decides to go straight, he attempts to make amends with all of the faces he’s peed on and people whose testicles he’s butchered and eaten. With a less-confident host, or one with more to lose, I would have slunk away or buried myself in Facebook Scrabble at this point; I would have felt nervous. But Timberlake’s confidence as he insisted on iced tea (fetched by Killam in a horse’s head) and game night replacing the scheduled orgy made me feel like it was all going to be OK. He showed no signs of discomfort, no hesitation. Yes, he would have sex with that pig, and then he would move on with his life, and so would we.

I had similar feelings about the encore of “Maine Justice,” the originality of which was pretty diluted this time around: We already know the backstory, now it’s just a lot of alligators and people waving fans at the courtroom’s Southern/New England humidity (I found the link!). This was Jason Sudeikis’s sketch, and Timberlake and Samberg (as the bewildered defendant, he was underused) just blended into the purple-and-gold tapestry (I see you, Who-Datter in the audience, and I LIKE YOU).

The trailer for “She’s Got a Dick” was a timely takedown of romcoms, though I felt like they could have gotten a little more real with it, if you know what I mean. You don’t have to actually show us more of the dick to show us, metaphorically, more of the dick. I guess there are “certain things guys can’t handle.” This short was so glossy (and props to Kenan Thompson and Kate McKinnon for slaying the “confused black friend” and “I love you, kid” best friend roles), but I felt like it could have gone a little further.

You know what never fails to go there, though? The Swarovski crystal girls. This time, Cecily Strong and Vanessa Bayer were selling Moet and Chandon (Moey Chambon, obviously) champagne like the rent was due yesterday and there are only two Valiums left in the dresser drawer. While Timberlake was wheeled into the sketch several times in anticipation of his cue (“Somebody say ‘celebrate’?”), the two former porn stars reminisced about the time Strong did “a weird shoot in Messico, two girls disappeared but I’m alive,” the occasion when Bayer ended up with plastic bags for insides after a magic trick gone awry, and of course the seminal moment during which Strong got “banged into a sinkhole, then a mole person banged me back up. I’ll drink to that.” When Timberlake joins the party as Ricky V.I.Penis, fixing to “treat you right” with “bubbles,” he’s got a new hook for the beverage: Monica and Chandler champagne. “It’s like nice champagne, but some of it’s Sprite.” It won’t break the bank, so you can use that wallet room in your jorts for more important items. Wink, wink.

Timberlake’s episode was a ratings high point, and a good note to go out on as we prepare for a three-week nap before Melissa McCarthy and Phoenix take the stage on April 6.

The Next Day: David Bowie's Big Return Is Whatever You Need It to Be