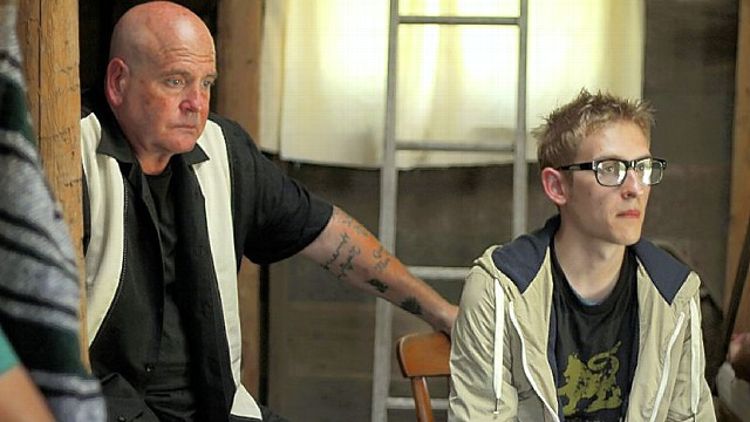 Siberia has a great pitch: Survivor meets Lost, a scripted reality show in which contestants willingly strand themselves in the wilderness for a chance at $500,000, battling supernatural forces and each other. It’s an exciting idea for many reasons. First is the fact that it signals a kind of cultural swing toward fiction while acknowledging and incorporating our familiarity with the crafted “real” of reality shows; we’re more than eager to get our zoned-out dopamine kick, one that would otherwise come from a Mark Burnett joint, from someone’s imagination instead. It would elevate the medium without depriving us of the physical challenges and high-stakes social manipulation, and if NBC’s Siberia (premiering tonight at 10 p.m.) can make us care about the whispery strategy-brewing conversations of fake people, then chapeaux, Siberia, we owe you a drink. It’s also the perfect time for a serialized commentary on the blurring lines between dramatic unscripted events and an entertainment culture that publicizes tragedy. Placing pawns on that chessboard opens up a world of intriguing possibilities, where every horrific outcome can be explored without actual repercussions. Lost, with its mysteries and confounding black smoke and ultimately unsatisfying master plot, feels like it was a long time ago. Lost was a wild ride, and it’s summer. It’s theme-park season. What do we want if not a roller coaster to board indoors on our glowing screens, away from the ceaseless rain or crushing heat? Where is the next man-versus-land attraction with spinning cups and unnatural animatronic beasts with fangs?

The response was mixed after the Siberia pilot was released to the Internet last week, following competitor Under the Dome’s big debut. The show’s setup — 16 people from across the globe are left with a camera crew and a settlement at the Siberian territory of Tunguska (the site of a meteor crash in 1908), consisting of a campsite and a few shacks with bunk beds, to survive as long as they can without forfeiting — was almost too good for some critics, who didn’t want to put up with more than 30 minutes of footage establishing the reality-show vibe before the first spine chill. The tone isn’t uniform, and while that’s most likely a symptom of pilot growing pains, it’s still unnerving to see a group of actors who seem split down the middle, half performing on a sitcom (I see you, gratuitous face-pulling lady!) and half on a fake documentary. That said, and maybe I’m on a lonely island here, I found the first episode to be more than watchable. After all, I’m the target audience for Siberia: a Survivor fan who is so petrified of the idea of squatting in the dirt and making fires with dry palm fronds that I can’t help but be drawn to the vicarious experience in any form. If you’ve got parasitically scary, dirty water that needs to be boiled with self-made flames and are running through the jungle at an asthma-inducing clip, I am so on my sofa to watch you, pity you, and fear for you. Siberia’s re-creation of the Survivor aesthetic is absolutely on point, from the confessional shots with the slightly out-of-focus trees waving in the background to the subtitled night banter between castmates to the lazy guy who sits in the one available chair while everyone else tries to build a fire (and, in a nod to Yau-Man, they finally succeed with the aid of a pair of glasses). Even if you’re not particularly interested in how assembling the first bonfire will chauffeur you through the dark alleys of a larger plot, which is hinted at in the final half of the episode as being a much more dire predicament than merely having to make food out of animals and wild poisonous mushrooms, your lack of interest is already seminoteworthy. Why is the real thing so gripping when the fabrication is dull and tedious? It’s the uncanny valley effect, and looking at this replica of something so familiar elicits a strong reaction. There is John Cochran, and then there is the computer-programming geek Daniel, whose pallor and meek demeanor evokes a kind of déjà vu. Most of the characters share first names with the actors who play them, which makes me wonder if NBC had flirted with plans to Catfish the lot of us into swallowing this show as a nonfictional treat and then backed away. I think that this was a wise decision.

If you cultivate a Wikipedian interest in the uncanny valley, you’ll soon wind up bothering your mind with the sorites paradox. It translates to “the paradox of the heap” because the best way to illustrate it is to think about removing sand from a pile, grain by grain, until there’s nothing left. At what point does it stop being a pile and start being something else? It questions our perception of things and points out flaws in the link between what we observe and how we classify it. We’re still scrambling to keep up with the ever-changing media species catalog: the news often fails to report the news, so social media takes over, with varying degrees of success; we know that the producers behind reality shows guide the plot, sometimes forcibly and sometimes gently, and that these sensationalized pseudodocumentaries undergo even more thorough sculpting in postproduction. But we haven’t yet figured out how to work this knowledge into our TV sandwiches while we’re consuming the product, because the experience of creating these shows is still so bizarre to us. We’ve become accustomed to the idea that we’re watching an alien hybrid between what we know and what we’ll never know, but we still haven’t progressed to the point where we can accurately differentiate genuine feelings or events from PR stunts and the machinations of fame-whoring agendas. The real-life consequences — divorces, suicides, offscreen friendships, and Teen Mom breast implants — that occur as casualties of these narrative arcs mean nothing after a reality star has achieved Us magazine cover status. The die has been cast, and every possible personal choice becomes a calculated career move. This fallout is too unfortunate and gross to be ethically sustained by viewers, hopefully, and anyone who watches Siberia can at least hang his or her hat on the fact that he or she doesn’t have to be complicit in any of the plot’s repercussions. It’s a safe yet demonic playground, a relief, though confronting the diameter of your own personal give-a-shit chasm between real people and scripted characters can be disappointing. It’s not the first time a show has ventured into this territory, but something about its presentation and timing made it the most promising.

The tagline on the Siberia promotional banner is “What happens when a reality show goes terribly wrong …” — ominous ellipses theirs. You could argue that we already know what happens — people die, get banned from wearing Abercrombie shirts, or accidentally light themselves on fire — but you and I know that it could get much, much worse. It seems preordained at this point that we’ll eventually cross the point of no return in a more deliberate and horrific way than we already have, both in terms of what actually happens and what parts of this hypothetical disaster are televised, and capitalizing on this wide-eyed fear by preemptively scripting a worst-case scenario that’s just beyond the parameters of possibility is a brilliant move. Siberia is playing with us, our attention spans and imaginations, and I trust its impulses so far. Ditching two characters in the first episode is an interesting choice, as is featuring a heartless and unsympathetic production machine and detached host (Jonathon Buckley) who may be colluding against the group in any number of sadistic ways. (Have they been cherry-picked to kill each other? Is it a sadistic psychological experiment? Are they going to be fed hallucinogenic mushrooms?) The question that hovers over Siberia, the central conundrum, is how can we justify making people into commodities, and what are our limits in producing entertainment out of it? At what point will it become distinct from its source material, and given how insane its origins are, will we even be able to detect the break as each granule of what ties it to the familiar is removed? The animals screaming in the forests of Survivor have always seemed far enough offscreen to provide a false sense of security, but we’ve constructed a safety-net hologram from the threat of violence they suggest: Surely, someone will protect the cast, and nobody would let a show devolve into total chaos. We tell ourselves this, but it isn’t exactly true. The threat is only as real as the puppeteers allow, and not only is their jurisdiction human and flawed, it’s to their benefit to test its limits by ignoring it as long as possible to milk every last drop of drama. We’re waiting for the ultimate disaster, the reality horror show, and anticipating it with thrill and dread. Siberia capitalizes on this by preemptively exploring the catastrophe we’ve been subconsciously anticipating for years, the event that would kill or at least forever alter our ability to enjoy this kind of programming. It’s a grand old pile of particles, best disassembled slowly and methodically. Will there be better incarnations than Siberia? Almost certainly, but so far it’s worth tuning in. How better to spend these hot few months than atoning for your viewership sins and cleansing yourself in the blessed waters of an uncanny fantasy? It’s a baptism via bunk beds and cold, callous camera crews, stinging but refreshing like hallucinogenic toxic fungi on ice. Whether or not Siberia lives up to the hype, it deserves a fair shake. Let’s give it three episodes before we erase its DVR slot to create space for The Bachelorette. Desiree will be fine. She won’t be eaten by Siberian wildebeests, find herself cornered by mutant amphibians, or haunted by spooky axes lodged in tree stumps — at least not this season. For now, we’ll just have to use our imaginations. And you know what? That feels pretty good.