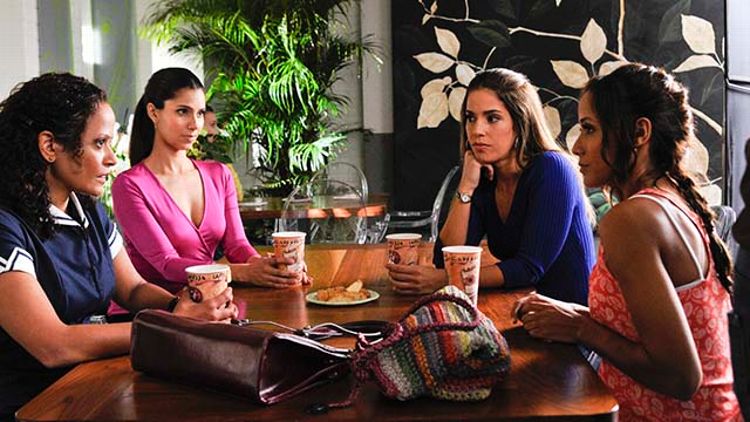 This show is still on the air, so we’re still watching it. Hand to God: Maybe five minutes after I finished watching Sunday night’s episode, there was a knock at my door. I opened it. There was a large man with a lot of hair on his arms standing there. I looked at him. He looked at me. I said, “Yes?” He revealed the large wrench he was holding. I said, “What are you gon —” and that’s when he bludgeoned me in the head. He cut up my body into little pieces. Right now my body is just a pile of chunks on my doorstep. I’m dead. This is my ghost typing this out. Normally God doesn’t let ghosts do freelance work, but when I explained to him that I was writing about Devious Maids, he said, “What?! Oh, man. Good. Fuck. That show is so bad. Yeah, please, Jesus Christ, yeah. Go back down to Earth and file copy.” God hates this show, too.

This is all true.

A maid was killed. A new maid who isn’t really a maid (and whose son is in jail for the murder) showed up and began trying to figure out who really killed her. She became close friends with the other maids immediately because everyone knows that all Latinas in the universe are cosmically synced.

Racial Designations for This Episode

Marisol Duarte: Marisol is the maid whose son is accused of murdering Flora, the maid from the first episode. She’s still mostly just working on that. She happens across a letter that Flora wrote before her death explaining that she was raped, but the Rich White Guy that lives in the house (the one that was sleeping with, and maybe even raped, Flora) snatches it from her and leaves the room. Later he throws the letter into the fire. He’s wearing all black when he does this, just in case you’d had trouble realizing that the guy who (probably) raped a woman and then discarded her was not that great of a dude. White people are evil, but at least they understand foreshadowing.

Rosie Falta: Rosie caught the Rich White Woman she works for having sex with an actor. She didn’t tell the Rich White Man who is married to the Rich White Woman because the RWM is a decent* human. Rosie’s most pressing issue, though, is something altogether unexpected: Her Latina accent has grown into a cartoonish facsimile. It’s truly inspiring. Even more breathtaking is that it now occasionally switches from HYPERMEXICAN to HYPERPUERTORICAN for no real reason. By the fourth episode I fully expect for her to just starting pulling her eyes into slits and saying things like “Me talky Chinese good for you too.”

*He wears lots of bright colors, so we know he’s not a felon.

Carmen Luna: Carmen’s still trying to get the man she works for, Famous Singing Latino, to hear her music. This eventually leads to her having to hide in a piano completely naked to avoid catching the scorn of a one-legged Russian woman. I wish I were kidding.

Zoila Del Barrio: Her daughter, Valentina, is still chasing The D of the son of the Rich White Woman they both work for. She’s not happy about this, so she convinces the Rich White Woman to host a party for her son and his friends so they can all see that Valentina is a maid and laugh at her. El amor de una madre.

Valentina Del Barrio: Still chasing The D. That’s basically it. Really excited for all the young Latinas watching to see that if you work hard and have talent and drive, you, too, can conquer Hollywood and earn a role on TV as a maid chasing The D of the son of the woman you make lemonade for. Dream big.

All of the maids are on break. They’re lounging next to a pool. One makes a statement, another asks for clarification on whether what she said was a compliment or an insult, and that prompts a maid between them both to note, “Who cares? I’m on a beach with Enrique Iglesias.” [Infinity sad faces.]

Me: What did you think of Devious Maids last night? Did it rile you up, you spicy Latina? Did it make you want to march on Hollywood?

Me: Dude, you know I’m supposed to be including your insight in this thing I’m writing, right?

Mom: You’re mad that I’m not doing your work?