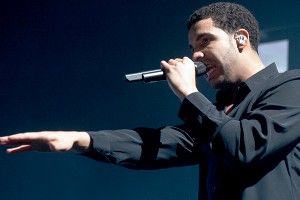 On Sunday, via his blog, Drake released “Enough Said,” a track credited to Aaliyah. Drake has long been publicly obsessed with the R&B icon, who died in a plane crash in 2001: He samples her; he gets her face tattooed on his back; he writes her letters in which he promises to buy her dinner if they ever meet. But now Drake may be ticking his devotion up a notch. Last week HipHopDX reported that Drake would be executive-producing a new posthumous Aaliyah album, and that a new Aaliyah single featuring Drake would be premiered on August 5, the day of Drake’s OVO Festival. And while Drake has yet to confirm the album plans — the closest he’s come is telling Tim Westwood, “I have some great Aaliyah news coming soon” — the single has indeed appeared.

It’s unclear if or when an official confirmation is coming, but it’s probably now safe to assume this Drake/Aaliyah album is going to happen. Drake would need some sort of relationship with the administrators of the Aaliyah estate to get his hands on unreleased material. And as MissInfo points out, that seems to be the case: “[N]otice in the left corner [of the single art]….that Blackground logo? That’s the imprint run by Aaliyah’s uncle and cousin (Barry and Jomo Hankerson). So that’s who’s green lighting this project.” OK, so now that we’re all assuming Drake is indeed executive-producing a posthumous Aaliyah album, guess what time it is? It’s time to get super-psyched or super-pissed off that Drake is executive producing a posthumous Aaliyah album!

On the latter side we have:

• Anyone who thinks all posthumous albums are bullshit
• Anyone who thinks Aaliyah’s catalog is sacred and shouldn’t be trifled with by anyone, multi-platinum recording artist or otherwise
• Anyone who thinks Drake, in particular, isn’t the man for the job
• Timbaland, who has said when asked about the project, “I know they trying to drop some Aaliyah records, but if he do it, it should be with me and Missy [Elliott]. The proper way for him to do that would be for me, him and Missy to be all on the record. But to put it on his record, would just not be right.”

You can’t really argue with the first two groupings. Yes, posthumous albums are kind of bullshit. If the artist in question wanted to release a bunch of demos and unfinished tracks, he/she would have released a bunch of demos and unfinished tracks. And yes, Aaliyah — revered even before dying at the tragically young age of 22 — shouldn’t have her catalog trifled with. But that doesn’t mean, thanks to the commercial considerations involved, that trifling of this sort isn’t inevitable. After all, if this Drake project does happen, it would be the second posthumous Aaliyah album, following 2002’s I Care 4 U.

Which brings us to the lack of Timbaland, and the problem of Drake. Timbaland was an equal partner in crafting the Aaliyah sound, but has long since lost his touch. He should certainly be consulted and involved in some way, but would it be that crazy to hand over the reins of the operation to a younger, hungrier artist, one in his prime? By the way, it should be noted that Toronto’s finest wouldn’t technically be producing the thing himself. Most likely, the man twiddling the knobs would be 40, Drake’s longtime producer and the guy behind “Enough Said.” Not that that’ll calm down the Drake detractors: Drake and 40 are the creators of The Drake Sound — the half-singing/half-rapping skeletal confessionalism — and the fear is that the duo will be Drake-ifying Aaliyah. If you like Drake, that’s maybe not so bad? If you don’t, it’s goddamn blasphemy.

This is a touchy subject for Aaliyah’s rightly obsessed fans, and any defense of Drake here is presumptive. We can guess that Drake, who is one of those obsessed fans, will have enough respect for Aaliyah’s inimitable sound not to swap it out for his own. We can guess that Drake won’t be, as he is on “Enough Said” (to the consternation of some), rapping about how he’s sad he’s rich on every track of this new album. Mostly, though, we can wait and see how this turns out.

True Blood Season 5, Episode 9: 'Everybody Wants to Rule the World'