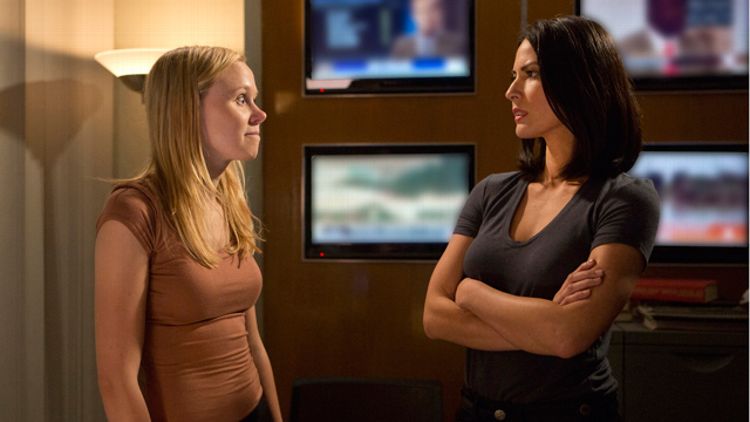 This show is beginning to have as many characters as Game of Thrones and twice as many pairings, and Jerry Dantana and Maggie had more face time this week than either Slon or Slantana. (Magtana? Nooooo. Well? Mayb—Nooooo.) What also makes the ’ship game so hard to track this season is the fact that every character is clinging to an ongoing news story as an escape from a failed pairing, and retconning a lot of prior emotional investment in said news stories. (How could I have predicted that Don’s rebound after Maggie would be not Sloan but Troy Davis?) Even the visual cues are proving unpredictable: Sloan was wearing her lucky Romantic Development Hat from Season 1 (the one she gave the “you’re not a bad guy” speech to Don in), but spent the entire episode in a Laundromat in Queens, so I’m now downgrading it to a mere Helpfulness Hat. As if that weren’t enough, they have replaced the Smartwater in the conference room with Fiji Water, which I believe to be a not-insignificant development. Smartwater is filtered through osmosis while Fiji Water passes through the earth’s crust during its filtration process, picking up, as the label on Smartwater says, “random stuff and whatever else the animals that swim in it leave behind.” Perhaps that tells us all we need to know about this season as compared to last; love gets more complicated the more stuff it comes in contact with on its way to the surface.

Just like in broadcasting, the rules change every week in the ’ship game. (That is not actually true of broadcasting, there are actually lots of rules, or “laws” if you will, that more or less stay the same.) Keep up, will ya? We’re trying to do the news here.

Jim Harper is truly at his most Harperian on this whole New Hampshire charade; his hair twice as ruffled, his jacket twice as ill-fitting, his charm twice as boyish. It was only a matter of time before the Romney campaign hotties started gravitating to him like Pringles crumbs in between the cushions of a coach bus. I dunno about this Hallie character though, man. “We’re competitors” sounds like a temp catchphrase after “We’re the only nonhideous white people on this bus, so face it, we’re going to tangle lanyards eventually” was deemed too clunky, and those spy headphones — while very cool and also I want a pair — are probably what one might call a dealbreaker. Both Neal and Jim have fallen in with humorless women who are going to expand their worldview and help them redefine their work ethic, but ultimately end up sexually untenable.

Jim’s story line this season is about how he elected to transfer to another work location because he was in love with his spoken-for coworker and kissed her and it didn’t work out so well for him, which is a plot almost as familiar as Jim’s name!

STEADY: The Newsroom and Sex and the City (News and the Sex Room)

The Newsroom uses plenty of beloved cultural institutions as shorthand for “dumb bad thing that is the opposite of what our heroes stand for,” but while its contempt for YouTube, Twitter, blogs, and anything requiring more than a dialup Internet connection has been well-documented, the HBO television program Sex and the City has been bearing the brunt of the blame for the intellectual state of America since about midway through Season 1, and I think it’s time it was recognized for that. The Newsroom obsesses over SATC the way the president of the Model U.N. obsesses over the cheerleading captain, calling her a bimbo and a slut and a bad example for the rest of her female classmates but secretly just super mad that she wouldn’t give him the time of day at the Homecoming Dance. Seriously, it’s kind of awe-inspiring how long the SATC-related plotline has willed itself to live on — starting from the first time we learned that Maggie’s best-friend landlord Lisa was a fan, which was the show’s way of telling us she was beneath Jim. This week we met a veritable Bingo of Sorkinian Dumbness in Erica, the female (ouch!) SATC fanfic (oof!) blogger (yikes!) who posted the YouTube video (eek!) of Maggie and who checks in at her local Laundromat on Foursquare (doyoyoyoyoyyy!) and somehow the writer(s) managed to make that goldmine of a person a one-and-done character. I would love to watch The Newsroom with Erica, obviously, and I would of course want to know which SATC type she thinks everyone at ACN is. (I wouldn’t know because I am too much of an intellectual to watch Sex and the City.)

OVER: Don and Eli (Doli)

Don simply has too much on his plate anymore to devote any time to what was once this show’s most underrated pairing. We went a whole episode with Eli on leave and when we finally get him back it’s just so that he can talk (talk) showers with Will? I missed Eli, but maybe he wouldn’t vibe as well with Season 2 Don Keefer. Don and Eli used to be each other’s enablers in dickitude, but what would they talk about now? Mud rooms?

OTP: Will and America (Willmerica)

“I’ll make you this promise. I’m going to be with you all night. I’m not going anywhere. I’ll be right here.” — Will McAvoy

Will and America have been on the outs for the majority of this show, and this week the hate really started pouring in via those pesky opinion-having Internetters (Will may not read the blogs, but he definitely reads the comments). But this week we flashed back to a happier time: September 11, 2001. Fueled by nothing but drip coffee and Charlie Skinner’s midnight origin-story retelling, Will promised to stay with America all through the night, as long as there was news to tell. So being barred from hosting the 9/11 anniversary broadcast, we learn, is more than a professional blow, it’s a personal one: the attacks were Will and America’s exchange of vows, their first dance, their honeymoon. Who can blame him for being a little more resigned than usual? Willmerica is a once-in-a-lifetime kind of love, a love so powerful that neither party always necessarily believes they deserve it, and just because it’s going through a rough patch doesn’t mean it’s not 100 percent end-game material.

Filed Under: HBO, The Newsroom