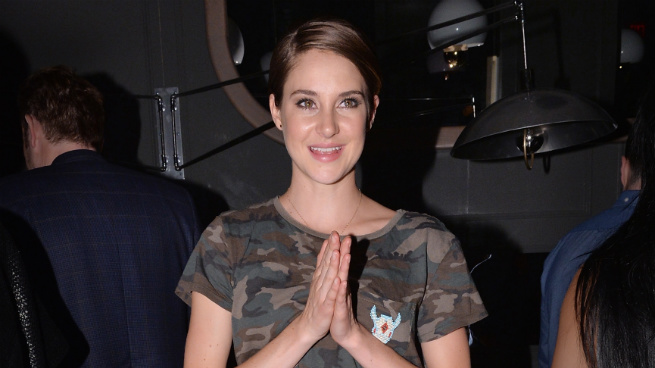 If the $56 million opening weekend take of Divergent is any indication, the young-adult franchise really is the B team Hunger Games it aspired to be, and its star, Shailene Woodley, has already been pegged as the next Jennifer Lawrence. Next, Woodley will undergo a Divergent-style gantlet of challenges to see if she is up to par. Can she open a movie? She just did, and a sequel called Insurgent has already been green-lit. Will she be able to open another one, without a built-in audience of hungry, hungry Hunger Games fans? We’ll know come June, when The Fault in Our Stars comes out, a Love Story–type teen weepie based on the best-selling book. What about her acting chops? Woodley’s performance in The Descendants earned her a 2012 Golden Globe nomination for Best Supporting Actress. Indie-film sensibility? She stars in an upcoming Gregg Araki movie called White Bird in a Blizzard, for which Araki said he modeled her role on the “pretty alienated girl” protagonists in Heathers and Beetlejuice. So maybe Woodley isn’t the next Jennifer Lawrence at all. Maybe she’s the second coming of Winona Ryder.

Then again, there’s the cautionary tale of Kristen Stewart, another actress heralded as the next Winona, who was nearly chewed up and spit out by the Twilight fame machine that had built her after she bit the tween hand that fed her popularity a little too hard. When you’re attached to a huge success, it’s easy enough to start believing you are special, rather than lucky. Woodley has a strong work ethic cultivated through spending years on ABC Family’s teenmomsploitation drama The Secret Life of the American Teenager. She doesn’t seem like the type to let the spotlight get the best of her, but it’s hard for anyone to go from relative anonymity to being photographed everywhere every single day. Other than being young and talented, Woodley and Lawrence don’t actually have a ton in common. Where Lawrence is precociously blowsy, Woodley is a full-on neo-hippie. This is what makes her charming and goofy in her own way that is different from Lawrence’s. Where Lawrence slips up on words and carpets, Woodley is utterly earnest and cheerily optimistic, the biggest Hollywood flower child since Drew Barrymore.

For example, Woodley’s bio on Twitter reads: “gaia. aloha. rewilding. sacralizing the feminine. gratitude.” She doesn’t wear makeup to most premieres, telling Interview that she chose to stop after seeing a horribly Photoshopped version of herself on a magazine cover, saying, “I realized that, growing up and looking at magazines, I was comparing myself to images like that — and most of it isn’t real.” It was in that now infamous interview, conducted by Emma Stone, that Woodley’s granola freak flag first started to really fly. Woodley expounded on her passions for “herbalism and organic farming.” She credits her time in Hawaii filming The Descendants with inspiring her transition from earth dweller to herbal goddess. She told Stone, “I’ve found that self-love and self-expression for me can just come in the form of trees and come in the form of connecting back to the soil.” She makes reference to a “crock pot of chaga mushroom tea,” discusses using mugwort to induce lucid dreaming sessions, and demonstrates a preference for those shoes that look like feet. She does yoga and uses the word “nourish” a lot, but not in the Gwyneth Paltrow, expensive-juice-cleanse sense. Woodley’s hippie instincts are straight out of the ’70s. If she could spend nothing and live just off the land, she would. As it is, she has to make time to plant wild seeds and make recipes from The Tassajara Bread Book in between anchoring a huge new dystopian YA franchise.

As for Divergent, it’s competent but never very dynamic. It is such a blatant Hunger Games rip from top to bottom that it’s hard to see it as anything else. It has the same somber cotton wardrobe and minor characters named Caleb and Uriah. There are endlessly long training sequences and Sorting Hat identity politics, with the prerequisite love story and Kate Winslet as a Hillary Clinton–like villain spliced into the mix. Nothing pleases me more than a Logan’s Run–esque narrative featuring a female lead, but I do get bored when there’s too much time spent world-building, especially when the world is so familiar. But Woodley, like her character, Tris Prior, does her damnedest to prove she’s special, not just another easily replaceable brick in the wall of starlets.

What has really made Woodley stand out as extraordinary is her latest run on the interview circuit, in which she makes no attempt to hide her true colors. She gave People beauty advice: “Get in a bath and look at your body and be like, ‘Wow, thank you so much for hosting my mind and my heart,’ like as women you know, and also be pregnant with the world.” BE PREGNANT WITH THE WORLD! She’s also into oil pulling, eating clay, and shampooing once a month. She makes her own soaps and cheeses. For good skin she recommends “laughter.” On the beauty website Into the Gloss, Woodley suggests letting the sun shine on your vagina: “Another thing I like to do is give my vagina a little vitamin D. [Laughs] I was reading an article written by an herbalist I studied about yeast infections and other genital issues. She said there’s nothing better than vitamin D. If you’re feeling depleted, go in the sun for an hour and see how much energy you get. Or, if you live in a place that has heavy winters, when the sun finally comes out, spread your legs and get some sunshine.” For your health!

Even if Woodley’s seeming lack of vanity is an act, it’s a refreshing act. She is your freshman college roommate, and you will learn to tolerate and eventually even love her crunchy ways. A movie star who disdains heavy makeup and never washes her hair, saying “the oilier, the better”? Stars, they’re just like crust punks!

"I really feel like it is probably the most iconic franchise in movie history." ...And the award for "most insane thing ever said about a movie with giant robots smashing each other into toaster parts" goes to... Mark Wahlberg on 'Transformers: Age of Extinction'!