Seth MacFarlane’s Family Guy Movie Idea Is ‘Impossible to Do on TV.’ Let’s Guess Why 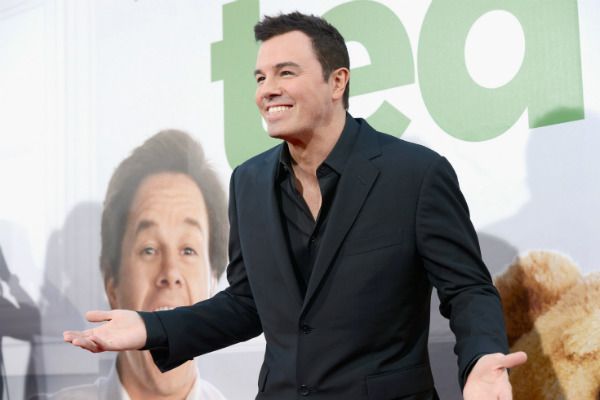 With Seth MacFarlane’s unlikely debut as Oscars host a scant few months away, the Academy’s designated lightning rod is now hitting the campaign trail and drumming up support. Which is how, on Wednesday, a class of UCLA undergrads found themselves mere inches away from the rich, luxuriously tanned of face of MacFarlane himself: As EW reports, the Mitt Romney of Animation (he’s rich and successful with highly vocal detractors? Also he’s technically wholesome but really very creepy? I don’t know, this falls apart if you examine it any further) showed up unannounced to introduce an MTV-sponsored contest, the Oscar Experience College Search. (They’re looking for kids who wanna work in the biz, and the winners get to present an award at the Oscars. This makes perfect sense as a prize, as presenting an an award at the Oscars is pretty much the only foolproof way left to launch a Hollywood career.) And while taking some questions from the kids, MacFarlane let it be known that a Family Guy movie is now “just a matter of when. It’s hard to do that while you have the series going on at the same time; I think that’s why it took The Simpsons 20 seasons to figure out how to do it.”

Also: “We do know what the Family Guy movie will be. The Simpsons movie, I thought, was hilarious, but the one criticism I would have is that it’s a story they probably could’ve done on TV. There could’ve been an episode that had that plotline. That’s the challenge with animation. You pretty much can do any story you want, so what is the reason for the movie? We finally hit on the answer to that question, and it will be something that would be impossible to do on TV.” Impossible, you say? What could that possibly mean? Three wholly not-thought-through guesses, below. (By the way, EW doesn’t report any instances of spontaneous insubordination which, like, step up your game, UCLA undergrads.)

1. All Live-Action Everything: “That’s the challenge with animation,” MacFarlane says. So why not drop the animation altogether? Taking inspiration from his comedic hero Eddie Murphy (I don’t actually know if Eddie Murphy really is Seth MacFarlane’s comedic hero, it’s just a safe bet to assume Eddie Murphy is every single person’s comedic hero), MacFarlane will not only voice but also physically portray every member of the Griffin family, including highbrow talking dog Brian. Then, at next year’s Oscars, which MacFarlane hosts again after a virtuoso performance the first time around, he presents all of the Oscars to himself.

2. #$&#!?&**#&&$*#&@: Smart money’s on this flick being unfit for the small screen because of an excess of crude material, and this could really take a number of routes: extreme cultural insensitivity, harmfully retrograde gender politics, a reductive summation of Islamophobia, virulently palpable gore, fart jokes. But let’s go ahead and assume that it’s Stewie doing a human centipede.

3. The Realest: The primary criticism of MacFarlane’s oeuvre? That behind all of those blustering big jokes, there is nothing: no empathy, no tenderness, no heart. How best to combat this charge? By refashioning his muses, the Griffins, as a bleedingly real American family, with all of the repressed desires, unspoken deceit, and heartbreaking bitterness that might suggest. Get ready for Family Guy: A Long Day’s Journey Into Night.

Video on Demand Report: Men in Black 3, Step Up 4, and the One and Only Sparkle