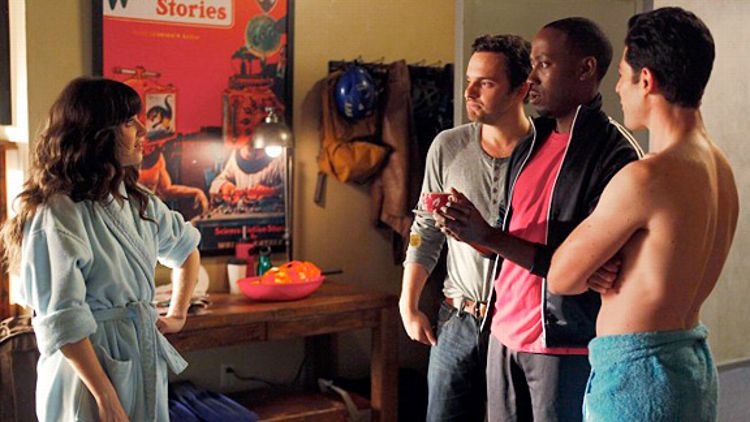 The cavalcade of press for Fox’s break-out sitcom The New Girl has, for good reason, focused on said girl herself, Zooey Deschanel. But after a careful, unicorn-free viewing of last night’s second episode — as well as the even better third, airing October 17 — it’s clear that behind every new girl lurk three strong male characters. This is meant as no slight to Deschanel’s performance: Her Jess is a pan-dimensional pixie, a fully-realized comic disaster in a sundress and clogs. But the secret weapon of the show, the ballast that has thus far kept it from tumbling over a candy-colored cliff into insufferable tweeness, has been the performances of Max Greenfield, Jake Johnson, Lamorne Morris, and, briefly, Damon Wayans Jr. as Deschanel’s “why me?”-asking, Y-chromosome-having roommates.

It takes a certain amount of gumption, of course, to call attention to the male performers in a successful and smart female-fronted comedy, itself something that would be an anomaly in any other year, and exactly the sort of scenario that keeps Christopher Hitchens up at night. But network television in 2011 isn’t any other year: Up All Night, Whitney, and 2 Broke Girls are all off to strong starts and each will live and die on the strength of their leading ladies. Furthermore, have you seen the plasticky excuse for dudes being foisted on us this fall? The empty suits in The Playboy Club and Pan Am, all Brylcreemed hair and blank, blinding smiles make rain puddles look deep while the caveman cartoons populating shows like Man Up and How to Be a Gentleman leave one dreaming of a sweeps-month crossover with Terra Nova if only to see them gobbled up as dino food. There’s central casting and then there’s the big box Castco where these stiffs were half-off.

The New Girl guys, by way of comparison, broke out of their network-note-pleasing boxes almost immediately. Roomie No. 1, Schmidt, was initially drawn as a gasbag so douchey he took his shirt off at the slightest provocation and willingly dropped George Washingtons into a penalty jar in exchange for the right to wear thumb rings and refer to himself in the third person. Yet Greenfield makes for such a stringy and sensitive Jewmba it’s much easier to imagine him taking the beat out for conversation and chai lattes rather than beating it up. His manic, needy energy is almost impossible to dislike, whether he’s watching Curly Sue or collapsing into a puddle of sweaty neediness after a grueling one-mile jog. Roomie No. 2, Nick, is the best of the lot thanks to Johnson’s perfectly modulated fury. He’s the most obvious candiate to eventually Ross Deschanel’s Rachel but let’s hope that’s a ways away; he’s much more enjoyable slow-burning — with fury, not lust — as Jess destroys first his flatscreen and, in an upcoming episode, his chances of getting in Lake Bell’s pants. As for Morris’s Winston, roommate 3.5, he’s had less time to make an impression, but his low-key energy is a smart choice for a character forced to make a sudden adjustment from Latvia to ladybusiness. Of course, it’s also just refreshing to see a bunch of men reduced to — and excelling at — the sort of B-plot driving supplementary roles women have had to endure for eternity: the grudging good souls who endure with relative good humor Jess’s attention-grabbing, embarrassing beatboxing neediness. She’s the woman-child, they’re the patient, parenting enablers.

There’s a delightful, surprising chemistry brewing here thanks in no small part to Greenfield, Johnson, and Morris, a new breed of TV dude equally comfortable in gym shorts or faux-fur ushankas. These new guys might not know all the words to that song from Dirty Dancing but damn it if they aren’t game enough to sing along.