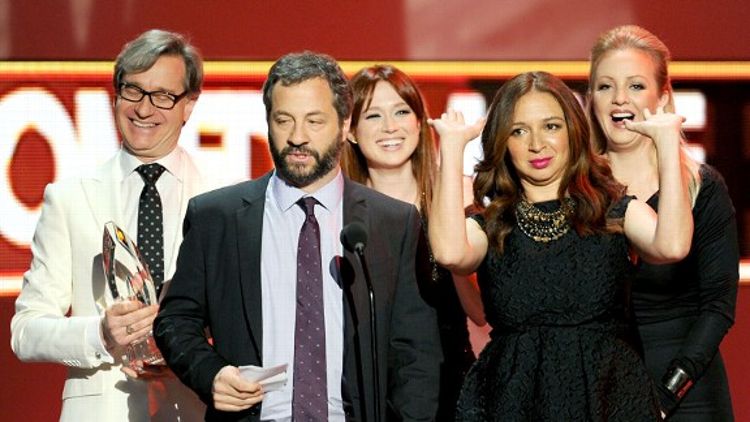 Last night, CBS aired the 2012 People’s Choice Awards, the only network-televised awards show to value the opinion of the unwashed masses over the critical and professional cabals who hand over their gilded Preciouses based on inscrutable, insidery criteria like “artistic merit.” But here’s the thing: The People are often wrong. The People have given us Two and a Half Men, at least three installments of Chipmunks movies, and flickering hope to a Rick Santorum presidential candidacy. And so we’ve taken it upon ourselves to look at some of the major PCA categories and decide who can keep their statuettes (what do they hand out, anyway? A giant crystal thumbs-up on a Big Mac base?), and which ones need to be redistributed in an attempt to correct any miscarriages of popular justice.

Bridesmaids
Harry Potter and the Deathly Hallows: Part 2 (**WINNER**)
The Help
Pirates of the Caribbean: On Stranger Tides
Transformers: Dark of the Moon
Verdict: ACCEPTABLE
As the rare blockbuster franchise that is not total garbage (Hollywood insider fact: TheTransformers movies are not actually storyboarded; instead, Michael Bay hires a small army of hobos to swing burlap sacks of discarded home electronics at each other to “get a feel” for each scene’s visual choreography), Harry Potter may keep its award. Congratulations, retired wizards!

Verdict: ACCEPTABLE
Sure, Johnny Depp cranked out another Pirates movie (someone’s gotta pay for his floating castle in Plan-de-la-Tour), but he also made the great, underappreciated Rango. And the competition in this field was not exactly stiff, unless you were sweating the results of votes cast from next to the Breaking Dawn display at Hot Topic.

Verdict: ACCEPTABLE
Remember Julia Roberts? Come on, Emma Roberts’ aunt? No? [Pulls up a chair, beckons children closer.] No, don’t call her Larry Crowne lady. Pretty Woman? No, I’m not going to explain what a prostitute is. Ask your father. But not while your mother’s around; you don’t want her scrutinizing his ATM withdrawals.

Verdict: UNACCEPTABLE, RE-AWARDED TO FAST FIVE
Is Harry Potter an “action movie”? An action movie is one where Vin Diesel throws The Rock through a series of walls, they trade head-butts for eight minutes, and then hop in some fun cars and chase each other around Brazilian slums at high speeds for the rest of the movie. But flying on magic brooms is nice, too.

Verdict: WHATEVER, JACKMAN CAN KEEP IT, WE ALREADY GAVE VIN DIESEL SOMETHING
“Shia LaBeouf” is to “action star” as “a gym bag full of sweaty towels” is to “onscreen charisma.” This analogy is unassailable.

Verdict: RE-AWARDED TO THE HELP
Do you have any idea how much we cried during that movie? Just slightly more than we did when Scott Hatteberg got the big hit, and when Brad Pitt ate that really clutch snack. Tears are the currency of big-time drama. Also, [spoiler alert] pies full of human feces.

Verdict: ACCEPTABLE, OBVIOUS
But had Emma Stone taken a dump in Ryan Gosling’s sink, there at least might have been a brief discussion.

Verdict: RE-AWARDED TO SCHMIDT
Had the PCAs been held just a few hours earlier, Michael Patrick King surely would have beaten some uppity TV critics to death with his award while screaming, “WHO’S A ONE-DIMENSIONAL RACIST CARICATURE NOW?!”

Verdict: DEFENSIBLE, BUT RE-AWARDED TO TOM FELTON
Look, Chloe Moretz is going to be with us for a long time, so let’s give this one to Draco Malfoy, because we fear casting directors are not going to say the words, “We really need an Angry, Aryan Frankie Muniz Type” as often as Felton’s agents might like.

Verdict: UNACCEPTABLE, RE-AWARDED TO ANDERSON COOPER
Have you ever heard Anderson Cooper giggle? It’s the sound of baby cherubs locked in a celestial tickle fight with a giant basket of Shiba Inus and Japanese schoolgirls. Ellen DeGeneres has never made a noise so joyful. Great dancer, though.