Saint and Superhero: Long Walk to Freedom and the Problems With Nelson Mandela Onscreen 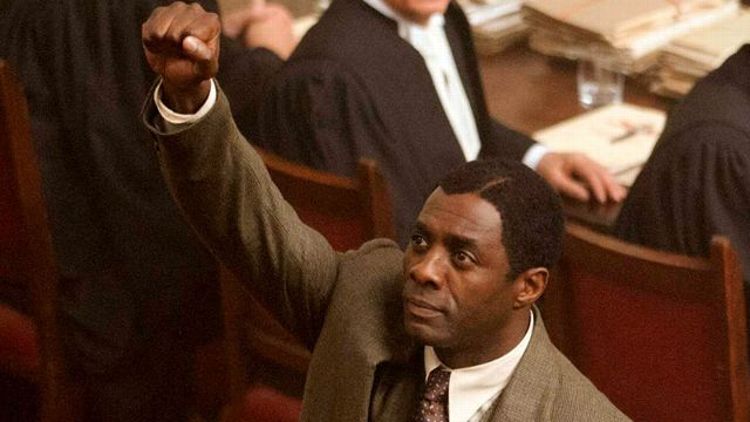 Mandela: The Long Walk to Freedom would seem beatific even if its subject, Nelson Mandela, hadn’t succumbed to illness last week. It presents Idris Elba as the hallowed South African freedom fighter, political prisoner, and president. It imagines him as a vision of stoicism, temperance, and wisdom — not a man so much as a tolerant totem. The musical score swells whenever Mandela speaks or stares or sits at a table. It’s overedited, and a generous defense of the handheld camerawork is that it attempts to capture the regional unrest. At two hours and 19 minutes, the film is long and impressionistically thorough.

Goopy flashbacks show us Mandela’s village childhood, in which young Nelson’s face (he was born Rolihlahla Mandela in 1918) is done up in war paint. Later, a different flashback shows that paint being washed off, indicating that he has thoroughly renounced even ritualized battle. As a lawyer in 1942 Johannesburg, he’s shown cross-examining an aggrieved white woman who has accused a black woman of theft but can’t continue with the trial because it’s too much, the reality of this educated black man speaking to her as if he were her human equal.

Mandela is recruited by the African National Congress and galvanized by the injustices of apartheid. He is tried along with three of his compatriots on charges of trying to overthrow the government, sentenced to life in prison at 44 years old, and released at 71. In between, the movie’s director, Justin Chadwick, and his crew pass the time with a mix of actual news footage and random riot scenes. They put on the obvious songs — yes, Public Enemy’s “Fight the Power.” Occasionally, the film has the smart, audacious idea to juxtapose Mandela’s pacifism with the mounting bellicosity of his second wife, Winnie (Naomie Harris).

There are at least a dozen films to be made from Mandela’s life. The one about the ways in which Nelson’s imprisonment radicalized Winnie — and about a particularly perverse type of marital collapse — could be especially strong. The movies have rarely found political equilibrium for these two, two distinct halves perhaps too divergent to restore a whole. He becomes physically unrecognizable to her. She becomes polemically so to him.

It’s admirable that Chadwick’s movie allows for even a whiff of that tension. But Winnie’s transition from long-suffering wife to murderous warlord is demonstrated more by the shifting gallery of her hair and attire than by any sort of articulated strategy. The perms, scarves, head wraps, and military fatigues (complete with hat) are shorthand and camp. This was a woman whom the apartheid government deemed extremely dangerous. In the movie, the danger is all costume. Mandela’s concession to the government in the film is put this way: “What they did to Winnie is their only victory over me.”

Long Walk to Freedom is a mild improvement over 2011’s Winnie Mandela, which starred Jennifer Hudson and focused on her defiance of the government. Winnie was a worse-made movie but one that managed to argue that her years of harassment only fueled her extremity. Otherwise, the movies have kept Mrs. Mandela devoted and long-suffering when she was a lot more compelling. Mandela, meanwhile, will never be more than a figure of holiness. He presents a chance for an actor to capture his highness and humanity but rarely his humanness. Danny Glover’s portrayal was the first, in HBO’s Mandela from 1987, a movie notable for airing during Mandela’s incarceration and for distilling the politics of the era down to a reconstruction of life between Nelson and Winnie (Alfre Woodard). His release, election, and global sainthood have made depicting Mandela tricky even as the depictions proliferate.

The last six years have brought six movie Mandelas, played by Dennis Haysbert (Goodbye Bafana), Clarke Peters (Endgame), Morgan Freeman (Invictus), David Harewood (Mrs. Mandela), Terrence Howard (Winnie Mandela), and now Elba. Freeman’s is the one closest in spirit to President Mandela. Howard’s is the most like Pepé Le Pew. Freeman was nearest to him in age and zeroed in on the pensiveness of his carriage and dryness of his wit. He suggested a man who very much enjoyed being who he was without forgetting who he used to be. He also was made to resemble Mandela, although, ultimately, the only person best equipped facially to play him might have been Muhammad Ali.

Long Walk to Freedom, which William Nicholson adapted from Mandela’s autobiography, doesn’t take many risks aside from dipping a toe in Mandela’s sex life before Winnie. (He philandered.) Otherwise, Elba doesn’t have a lot that is dramatic to play. He bears down on the stoicism. But because the film evades the nuances of Mandela’s political shifts and the distinctions between the different styles of freedom fights, there is only one note for any actor to strike. Nor does the movie avail itself of the 28-year discourse Mandela had with his three fellow ANC prisoners, including Walter Sisulu (Tony Kgoroge) and Ahmed Kathrada (Riaad Moosa).

A lot of it is boilerplate and blurry. Apartheid isn’t depicted so much as suggested. Even so, it’s refreshing to get an unmediated portrait of Mandela, one that doesn’t feel obligated to find a white angle for the purposes of commerce. The Weinstein Company is the film’s distributor, and it’s another striking release from a company that has spent the year committed to films about black men and black life (Fruitvale Station and Lee Daniels’s The Butler came out in the summer).

Topping Mandela’s own book or Mandela: The Living Legend, the chillingly patient two-part BBC documentary, perfectly narrated by David Dimbleby, would be hard. This film doesn’t get close. Better than any fictionalized movie, outside of the films of Neill Blomkamp, the BBC documentary gets at the sheer science fiction of apartheid with Mandela as its most famous protagonist.

If Elba doesn’t take many actorly chances, he does contribute something new to the Mandela legend: his physique. This Mandela is big and strapping and movie-star handsome. Whether he’s chopping rocks in the prison yard or seated in a yard covered in implausible old-age makeup, Elba’s own carriage manages to literalize Mandela’s inner fortitude. He seems like a political leader, sure. But Elba also makes him look like a superhero.

You Guys, I Don't Think R. Kelly Is Actually Singing About Oreos

Afternoon Links: Whatever Happened to the Great Romances of Love Actually?