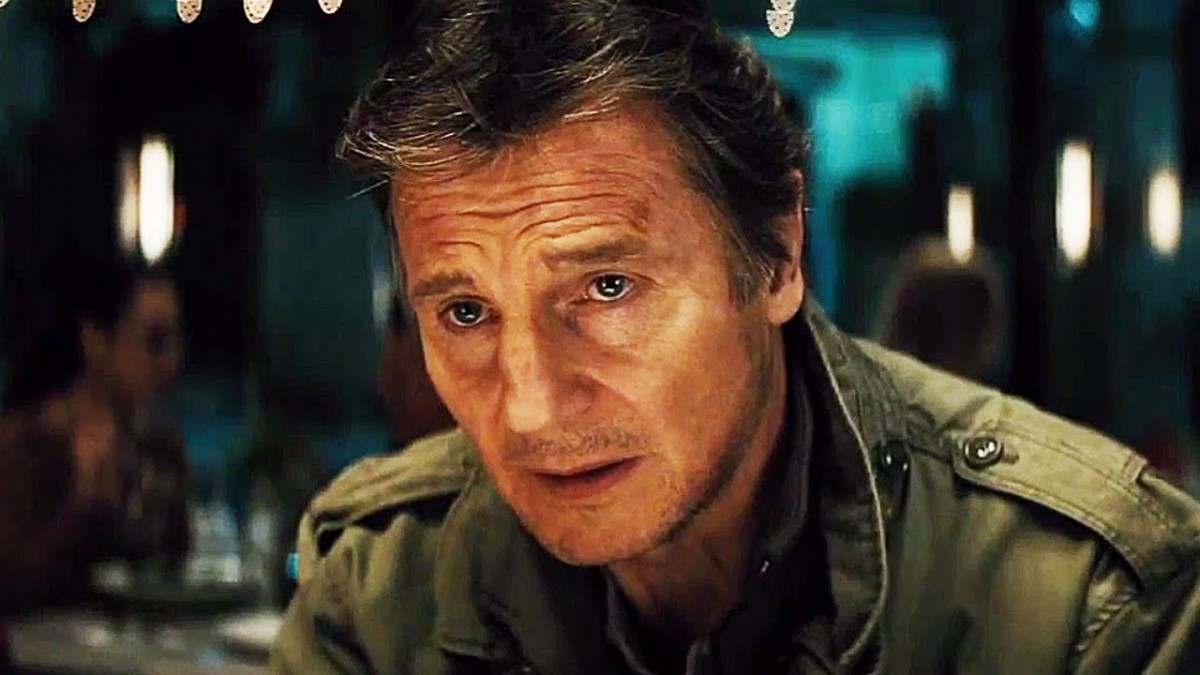 In Run All Night, Liam Neeson is Jimmy Conlon, an alcoholic lout and assassin for the Irish mob of Queens, New York. Jimmy has been pals with Shawn Maguire (Ed Harris) long enough for the creases around their eyes to match. Until about five minutes ago, Shawn was a biggish-time drug boss. But he has gone legit just in time to refuse a cocaine-distribution partnership that his son, Danny (Boyd Holbrook), has promised to an Albanian outfit. Shawn has seen drugs destroy too many lives, but he can’t see that the track suits and the finger tattoos and the indoor sunglasses on the Albanians spell doom for Danny; he doesn’t know that Danny also owes the Albanians money. When they arrive at his apartment to collect, Danny’s tweaking with some bros and decides to shoot his visitors, including one he has to run down and slay on the street.

He does this in full view of the Albanians’ limo driver and The Black Kid From The Projects whom the driver mentors at the local boxing gym. The kid just happens to be biking by in time to record the murder with his cameraphone. Danny recognizes the limo driver because, naturally, the limo driver is Jimmy’s son, Mike (Joel Kinnaman), who, years ago, cut Jimmy out of his life because Jimmy is “trash.” But, later, the Trash saves his son’s life by shooting Danny dead, and Jimmy and Mike wind up on the run together from Shawn and his gush of goons, including Holt McCallany, who continues his string of body man roles.

With all due respect for Harris’s ability to overact even while underacting, and given the hour-plus of citywide demolition, the stakes for the action here are awfully low. One dead crook is enough to spark one of those under-the-elevated-train car chases, produce a pile of dead cops (upstanding, corrupt, etc.), and incite a manhunt that jeopardizes Mike’s wife, daughters, and his poor, put-upon brother-in-law. There’s a big shoot-’em-up in a massive, mostly black public housing complex, where the Conlons are looking for the kid who shot the video. The NYPD evacuates the building, and one of the evacuees fails to turn off her stove, whereupon a grease fire turns into an explosion from Die Hard.

Neeson brings his usual mix of cowboy dignity and dusty humor to a part whose bigotry and drunken dimness call for a much dumber performance. Killing is probably the only thing Jimmy’s good at, but, aside from one early scene in which he fails at playing Santa at Shawn’s Christmas party, his incompetence is entirely anecdotal. Neeson is working with Jaume Collet-Serra, the Spaniard who directed him in the similarly ludicrous but far better, far more intense Non-Stop. Collet-Serra gives his star ample close-ups (and one rejuvenated flashback) and puts him at the center of a couple of well-done chases and fights, one of which is set in a roomy subway bathroom complete with a cloth hand dryer ripe for weaponization.

But Collet-Serra is out of inspiration. You’re waiting so long for the balls in Brad Ingelsby’s script to land that the “all night” of the title becomes a promise. The action sequences get overly familiar. After the bathroom fight, I thought, What’s next, a train-yard shootout? Yes, indeed. The movie begins by rewinding 16 hours from the end, which is one of the most torturous devices in all of action-thriller-dom: It’s been 90 minutes, and we’re not even close to wherever it is this movie starts! Toward the end, Mike tells Jimmy to run, and Jimmy says he’s too old. He’s been running for half a day, and Neeson’s been going for, like eight movies, and now he’s too old?

Sometimes, it doesn’t take much to make one of these overblown gangster-crime thrillers tolerable. Something witty falls out of a detective’s mouth. One of the bosses (or one of his lackeys) is played by a charismatic weirdo — or a star. There’s a plot that you want to follow instead of a plot that’s dragging you, feet first, toward the closing credits. The cinematographer knows how to compose a shot. There’s an action sequence that makes you want to stand up and cheer. Or maybe the movie is short. Any one of those things can be enough to keep you in your seat.

Run All Night has something like that. When Common shows up just past the halfway point, wearing a perfectly tailored mackintosh and thick glasses and carrying a gun, a laser pointer, and night-vision toys, you sit up. He has about three scenes and says maybe two sentences, but he makes them count. I don’t know if he’s any kind of actor. But when he’s in a limp romantic comedy or a shitty action movie, he changes its properties. He’s the one thing in Run All Night that you don’t feel like you’ve seen before, even if the part is just like the nut job Brían F. O’Byrne played in The International.

But I was bored anyway, and when you’re bored with something like Run All Night, there’s plenty of time to notice the sadomasochistic romance with crime and the premium it places on white crooks. (The same goes for the blind affection lavished on the hip-hop gangstas in Neill Blomkamp’s Chappie.) Jimmy is a rueful, cold-blooded hit man. But he’s also the hero of a Hollywood movie. By now, we’re so used to seeing Neeson killing for the worthy cause of protecting his family that this movie can bust reason and break the normal bounds of morality for him to do it once again. The detective who’s been on Jimmy’s case for years, played by Vincent D’Onofrio, is still bitter about his crimes. So is Mike. So is Jimmy’s brother (played by a fine, famous actor, who, here, is as gratuitous as that train-yard scene). It’s true that Jimmy is riddled with guilt. “Just because I’m not behind bars,” he says to Mike, “doesn’t mean I’m not paying for what I did.” But it does mean that Neeson enjoys the luxury of our paying to see him do it. 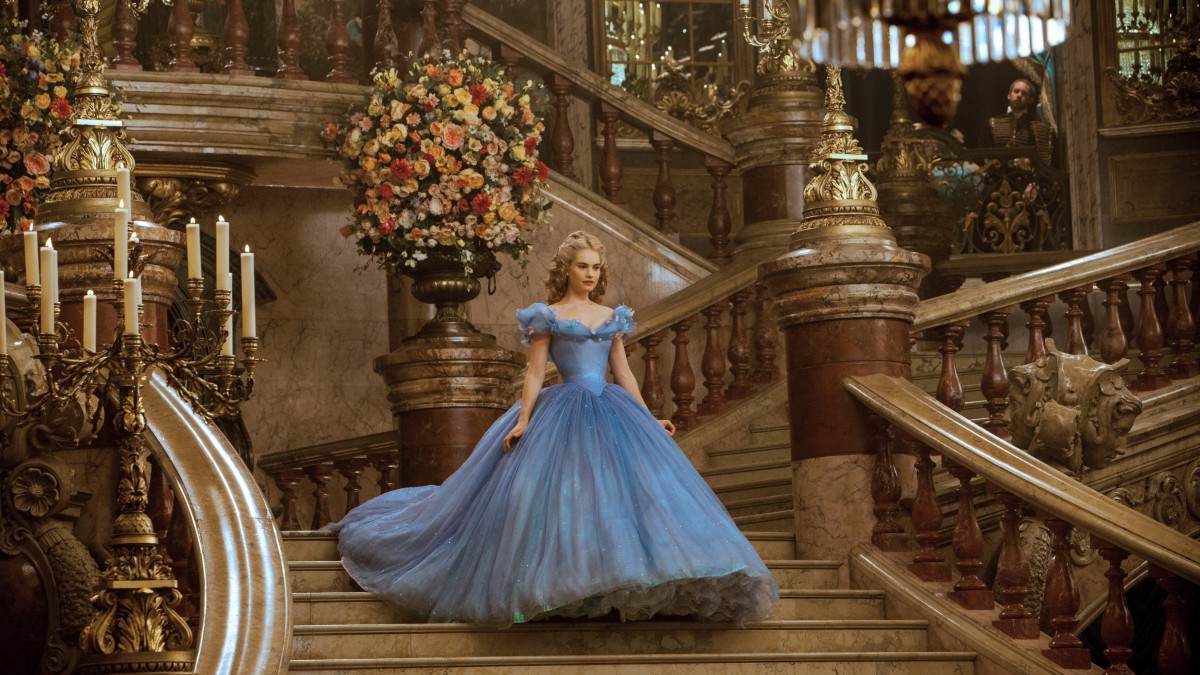 The makers of Disney’s1 new, live-action Cinderella probably mean well. They’ve tricked out the movie in visual effects that let the pumpkin erupt into a gilt carriage – less “poof,” more ka-blam. They’ve given it a sound design that could credibly be mistaken for American Sniper’s, and costumes that NASA would send a probe to study. But the filmmakers are still stuck with this English rejiggering of Charles Perrault’s 318-year-old version of the folk tale, which the average American kid learns through osmosis.

You know the story. A mistreated maid wins a magical evening at the royal ball but has to make an abrupt exit before the spell expires. Smitten, the prince retrieves the glass shoe she leaves behind and tracks her down. That is that. That, here, is 112 minutes, a full half-hour longer than the 1950 animated original, which was also a musical and a true visual enchantment. There’s one production number for the 2015 version — the dance at the ball — and scarcely any singing. Cinderella (Lily James) warbles here and there, but the score (more noise, it must be said) hits her like a tsunami.

The film explains how Cinderella — calling herself Ella — goes from aristocratic heiress to glorified maid. Her widowed colonialist father (Ben Chaplin) remarries a widow (Cate Blanchett) with two bratty daughters (Holliday Grainger and Sophie McShera), and they take over the mansion after he dies abroad. As the stepmother, Blanchett demonstrates a commendable lack of shame. Like Glenn Close in those Dalmatian movies, she makes evil glamorous. Twisting her lines as though she’s wringing a neck, and cocking her head and gliding across a room as though reared in a classical Hollywood finishing school, she’s fun. But she’s the latest elite actress to go full hag for a bombastic fairy tale. If acting is comparable to fashion, Agnes Moorehead is the new Bette Davis. Or maybe Faye Dunaway never goes out of style. (Helena Bonham Carter shows up as the blonde, bumbling fairy godmother, and despite the cheery circumstances, she gives the part a psychotic twitch. Her wand might as well be a hammer.)

Kenneth Branagh directed this movie. I didn’t know that until the closing credits, but it explains the scenes between the prince (Richard Madden) and his father, who’s played by Derek Jacobi. Jacobi has worked with Branagh onstage and in Branagh’s other movies. These scenes are as dull as the rest of the film is loud, but a frisson of love comes through them. They also impart a sense of the dramatic complexity of Branagh’s early Shakespeare adaptations and his great reincarnation thriller, Dead Again. I don’t know why these palace scenes are here, except as a warm respite from the arch comedy over at Cinderella’s. They do, however, establish that boys in these fairy tales also have standards — along with bulging riding pants.

Disney has attached an animated Frozen short to the front of this movie. It’s cruel, like starting a long, overcooked dinner with dessert. The Frozen world is new to us, underexploited. It’s got an energy and personality that Branagh tries to give to Cinderella, but Branagh’s is excessive. Cinderella is caught halfway between the stateliness of a PBS period piece and the nonsense of Branagh’s Thor. Including the short was meant to give the kids in the audience two treats. I’m all for confection, but this movie takes that too far. Cinderella and the prince look like they belong on a wedding cake.

Songs of the Week: Southern Rock for the (Finally Thawing) Spring