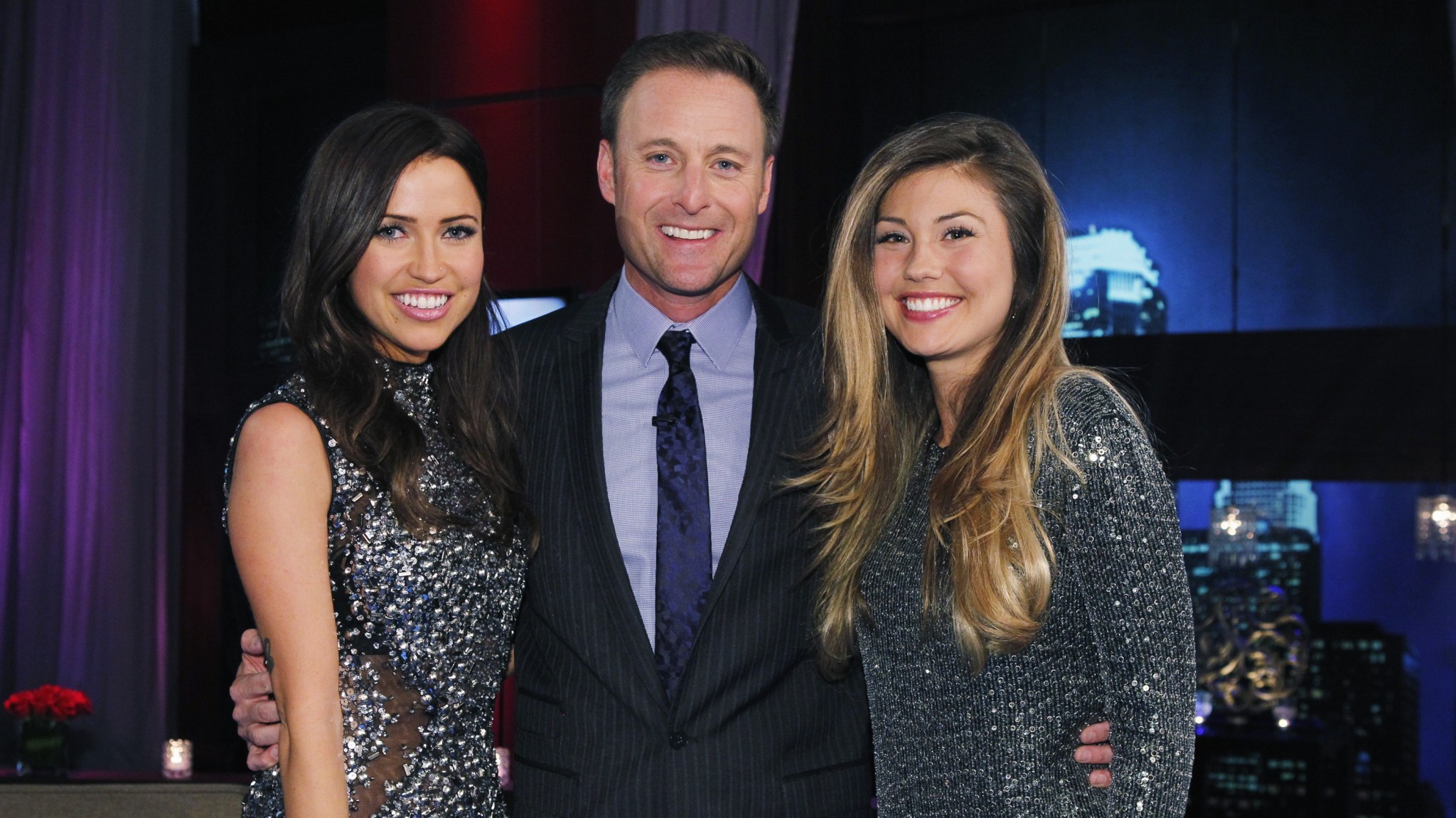 There are benchmark decisions that you make in life that alter your course. Quitting a job, moving cities, getting a neck tattoo, prank-calling Lil Wayne’s house — times in your life when you realize that from that point forward nothing will be the same. This week was one of those transitional periods in reality TV. We may have seen the last episode of Real World, we may have seen the last of Stassi on Vanderpump Rules, there may never be another lone Bachelorette, and, most shocking, Johnny Bananas may be the Challenge champion.

Given that nothing will ever be the same, we have to start off with the question that will have the most impact on our collective lives:

Wait, What the Hell Did Harrison Say About the Two Bachelorettes?

Listeners of the Right Reasons podcast know we have been touting a return to the multiple-Bachelor/Bachelorette format for years. They did it once, in Season 6 of The Bachelor, and never again. When Chris Harrison announced that both Britt “My Hair Weighs More Than I Do” Nilsson and Kaitlyn “Friend Zone” Bristowe will be platooning the Bachelorette duties this season, I was ecstatic. Not because I thought they used my idea to format the show. I am not narcissistic enough to think that is the case. I mean, everyone watched VH1’s Real Chance of Love, right?1 I was ecstatic, because I love the idea that not only did the Bachelorette have to make a decision, but the pool of handsome, doltish, normcore bros also had to make a … wait … what is that tingle I feel … I feel a Lowbrow Highlights Top Five coming on, and I like it!

This week’s Lowbrow Highlights Top Five are My Top Five Favorite Things About The Duel Bachelorette Format, listed from “I just had to think of a fifth — sorry, this one isn’t that good” to “This television show is going to start a religion and Chris Harrison will be the new Jesus”:

5. The fact that Britt doesn’t shower: Not only is this the first time that we have two Bachelorettes, this is the first time we have ever had a Bachelorette who doesn’t shower. She admits to showering as little as possible — not exactly what anyone looks for in a spouse. The only trait for a potential spouse that is more of a dealbreaker than never showering is living in Arlington, Iowa.

4. The foursome dates: Dates with a second couple always have a little more energy to them. There is always that sneaky third bottle of wine at the table, the “let’s all gang up on my partner” conversation, and that comparison/competitive undertone that fuels the fun fire.

3. The guy they both want to sleep with: Let’s be honest, watching dudes compete over a girl is like watching a second grade soccer game; watching women compete over a man is like watching the World Cup final. I can’t wait until the third or fourth episode, when the pool of handsome, doltish, normcore bros have each pledged their allegiance to one of the two Bachelorettes except for that one guy. That one guy who is torn between the two, and Britt and Kaitlyn are both vying for his attention. Which brings us to:

2.The Bachelorette backstabbing: This franchise has always had more than its share of snitching. People in the suitor pool using their one-on-one to drop the ol’ “so-and-so has a girlfriend back home” or “so-and-so really wants to be the Bachelor,” or the classic “so-and-so isn’t here for the right reasons.” Now that we have added the layer of the dual Bachelorettes snitching on each other, we have tripled down on the potential snitching. You think Kaitlyn won’t mention the fact that Britt doesn’t shower to a guy Britt is into? You think Britt won’t let it slip that Kaitlyn got handsy with another guy Kaitlyn is into? The Bachelorette backstabbing is going to be so fucking good.

1. The fake friendship between the Bachelorettes: I can’t wait to see these two giggle, hug, help each other out with fashion, goss about the boys, do dual interviews with Chris Harrison, have breakfast together, and share a house while the whole time secretly hating each other. If it makes me a bad person to be so excited for this, then a bad person I am. I am so pumped for this format twist …

… rather, I WAS so pumped for this format twist until Chris Harrison, drowned out by the applause of the crowd, added, “The 25 men, on night one, are going to have their say about who they think would make the best wife.”

What is the point of that? Why even bother? I WANT A FULL SEASON OF TWO BACHELORETTES! Not one night of it. My wife was furious when Harrison made this announcement. Why make someone think she is the Bachelorette for months only to drop her on the first night? This is such a bad idea that I trust the Bachelor/Bachelorette producers will reverse course and make it a full season of two Bachelorettes. It is the right thing to do. DO THE RIGHT THING!

I Think We Just Watched the Last Episode of Real World

This week, MTV announced new seasons of Bunim/Murray shows The Challenge and Are You the One?

That is fine and everything, but what it said the loudest is what it didn’t say. There was no announcement of a new season of Bunim/Murray’s Real World. For those of us who are old enough to remember the original Real World, this is big news. Real World may not have been the true “first” reality TV show, but Real World was the first reality-TV show. The idea that the franchise may not return has implications beyond “Where are they going to get new idiots for The Challenge?” Dropping Real World from its programming slate feels a bit like how MTV dropped, you know, music videos from its programming slate. Real World brought us Johnny Bananas, Real World brought us Puck, and Real World brought us Pedro. Over 30 seasons, Real World has tackled every possible issue of the human condition, and that is why MTV might cancel it — too many issues.

This season has gotten a little dark. Bruno was inches away from hitting women in the house on multiple occasions, Madison is a recovering addict who got drunk every single night, and Jason — well, Jason’s actions this week provide a perfect case for why this show both should and shouldn’t be canceled. Let’s have a look:

The final “skeleton” of the season was Jason’s father. Jason is a man in his early twenties who has never had a relationship with his father. When his father came through the door, he and Jason sat down and had a chat. A real fucking chat. A “I just had a child, and I am not going to abandon it like you did to me” chat. Watching Jason simultaneously chastise and charm his father was fascinating. It was the real world. We witnessed a man — a grown man — meet his father for the first time and look for his approval while at the same time making it very clear that he was irrevocably damaged by him. It was uncomfortable to watch because it was so real. It made me forget about all the drinking, cheating, fighting, lying, stealing, and furniture smashing from the season and focus on the original premise of the franchise. Jason had stopped being polite and started getting real. His talks with his father were some of the best moments I have seen from the franchise.  His actions with his roommate Nicole were some of the worst.

Slammered-ass Tony was caught stealing a bottle of wine from a nightclub, which led to the whole Real World crew being kicked out of a nightclub. That led to Jason being really upset. Jason was carrying on and on about how Tony made them all look bad and ruined their reputation. Jason’s anger turned toward Nicole because she was (somewhat) defending Tony during the aftermath of the ordeal. Nicole went to defend herself against Jason’s allegations, got in his face, and then …

Well, then we don’t really know what happened. The MTV suits and Bunim/Murray producers did something that (to my knowledge) they have never done before: They didn’t show us what happened. They had the footage. There was clearly coverage of the event, but they did not put it in the show. Based on discussions after the fact, it is pretty clear that Jason pushed/threw Nicole in a violent manner. It was an inexcusable, disgusting, violent act that doesn’t have a place on cable TV. Maybe that is why they have (apparently) decided not to bring the show back. A show that used to tackle serious issues and feature people you might encounter in your real life has devolved into a weekly chronicle of drunken assaults between caricatures of humans. One could make the case that Real World is not helping the young people who watch it. It is hurting them, and that is why MTV might cancel it. However, one could also point out that this is the same network that showcases Teen Mom and Are You the One?

Regardless, Real World was the show that launched reality television as we know it, provided much of the foundation that cable TV was built on, and made me fall in love with watching people argue on the boob tube. If it really is canceled, at some point, somewhere, I am going to cry. But I cry for everything.

Hurricane Nia and the Dick Poke Felt ’Round the World

It was a very busy week for Hurricane Nia. She started the latest episode of The Challenge by eviscerating Nany, telling her she is “the champion of sucking every (man) off in this house.” Hurricane Nia then proceeded to go on an apology tour, telling every remaining cast member in the house how, you know, that wasn’t really her saying all those terrible things. She then went on to fall off a 50-story building in what was the scariest, craziest, most dangerous challenge in the history of the show. But Nia’s most impactful act on this episode was on the “next time on.” On corners of the Internet there have been rumors of a sexual assault in the finale — a sexual assault that sends someone home right before the finale. On the “next time on,” we got a look at the assault. Check it: 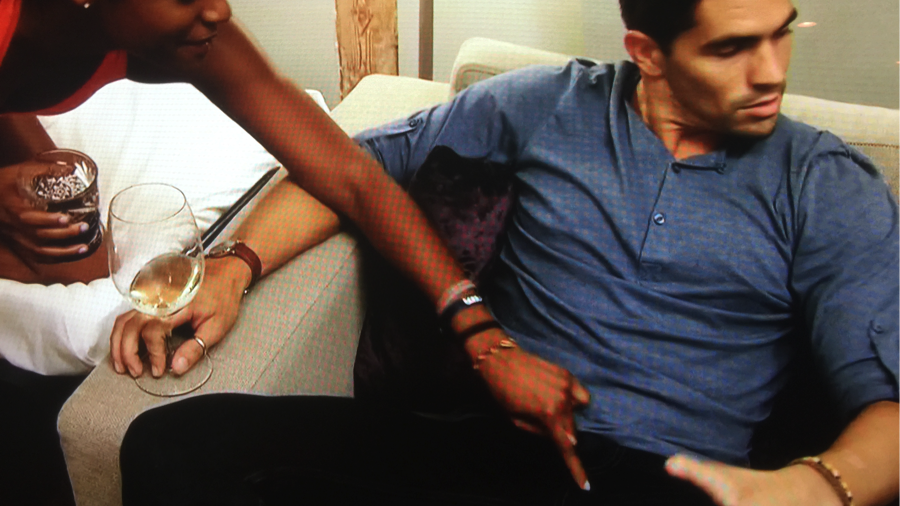 MTVTHAT IS JUST A DICK POKE! A DICK POKE! Sexual assault is a terrible, heinous act that is not to be joked about, but a casual dick poke is not sexual assault. If Leroy doesn’t get a chance to compete in the final over his partner’s dick poke, there is no justice.

Also, who wears a thumb ring?

Quick Rundown of Other Shit That Happened That Deserves a Mention

Seriously, dude, say it right. There is nothing more annoying than people trying to show off that they took French class in junior high when they pronounce shit.

That is it for the column this week. As always, enjoy your weekend, listen to The Right Reasons, and, if you are at SXSW, come check out Juliet and me recording a “Great Moments in NBA Instagram” podcast live. Check back next week for more coverage of Shahs of Sunset than Shahs of Sunset deserves. God, I love Reza.