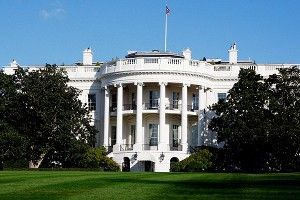 In 1996, director Roland Emmerich destroyed the White House, via aliens, in Independence Day. In 1998, he destroyed New York, via mythical dinosaur, in Godzilla. In 2004, he destroyed North America, via global warming, in The Day After Tomorrow. In 2009, he destroyed the world, via ancient Mayan prophecy, in 2012. And now Roland Emmerich will — well, he’s sort of destroying the White House again. Roland’s in talks for a project called White House Down, which follows a paramilitary takeover of the highest office in the land. OK, yes, there won’t be any epic natural forces of annihilation or alien species with super-advanced weapon technology bearing down on the White House this time. But have you ever seen a paramilitary invasion go down? It’s not very easy to pull off without breaking a few vases. Lincoln Bedroom, you are going to have bootprints everywhere.

The script was written by James Vanderbilt, who also wrote the new Spider-Man flick, and was bought by Sony Pictures for $3 million. (Friends of James Vanderbilt: now is a good time to float the idea of old Jamesy paying for your child’s kindergarten tuition). And according to Deadline, White House Down brings Hollywood 2/3rds of the way to a Die Hard trend story. Earlier in the week, Universal Pictures picked up a pitched called Speeding Bullet from Jeremiah Friedman and Nick Palmer, which apparently echoes Die Hard in the “bad guys take over something” kind of way. (The details on that haven’t yet been revealed.) Does that mean a reboot of 1991 Sean Astin “prep school kids fight terrorist invasion” classic Toy Soldiers could possibly be on the horizon? Let’s just keep on believing.

Total Recall Trailer: Where are They Hiding the Three-Boobed Hooker?