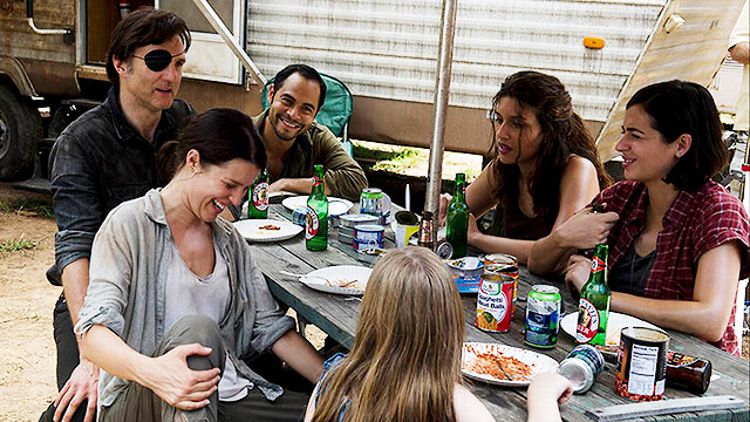 Most seasoned political observers agree that F. Scott Fitzgerald’s famous maxim “There are no second acts in American lives” is as misunderstood as it is misused. Many gifted leaders, often of questionable character, have managed to rise, phoenixlike, from the ashes to mount comebacks for the ages. Take Richard Nixon. Or Steve Jobs. Or the Governor.

It took six episodes, but The Walking Dead has finally built up momentum in its fourth season following the merciful conclusion of the stagnant plague plot that was essentially a redux of Season 2’s stultifying farm cycle. “Dead Weight” gave this season a full head of steam as it cruises down psychopath lane, setting El Guv on a promising collision course with Rick Grimes and his not-ready-for-zombie-time players.

Still, if you feel like we’ve been here before, you’re not wrong. This season hasn’t exactly delivered an excess of originality. But maybe the second time’s the charm. To misquote Shakespeare: Last season’s Rick vs. Guv title card finale brought a lot of assault-weapon sound and flash-grenade fury, signifying nothing. Though Sunday’s episode concluded with the familiar image of “Brian” staring lustily at Rick’s concrete-chic prison walls, the setup is slightly different this time. For one, the Governor is now a dedicated family man. For another, if only in terms of raw numbers, the tables are turned (give or take a tank).

There are a million questions, and it’s hard to pick just three. But we chose this conceit seven weeks ago, so by Georgia, we’ll see it through.

Are We All Really Borne Back Ceaselessly Into the Past?

When that past involves ruthless sacrifice in the brutal, winner-take-all reality show world of Survivor: Zombie Island — apparently so. This week’s cold open set the table with a symbolic chessboard, as if to immediately vanquish the idea that the Governor would play second fiddle to ex-goon Martinez, who’d rescued El Guv and Megan the Redeemer from the pit in which “Brian” had perfected the art of hand-made zombie sushi last week. Playing a game of chess with a level of metaphorical bluntness that ranks second only to The Seventh Seal’s, Megan innocently asked if their new family unit would be OK because they’re all good people; Guv bit his tongue. Then the show indulged us for a few beats as Martinez welcomed the Guv and his gals into the new campfire circle.

Speaking of Martinez, Jose Pablo Cantillo deserves extra gold stars for bringing an atmosphere-leavening sense of humor to his swan song; on The Walking Dead, the only thing more scarce than antibiotics are laughs. In hindsight, Martinez’s imminent demise was so obvious that I truly feel ashamed for not putting him on Death Watch last week. It turns out Martinez was the kind of big fish who flourishes in a small pond: This lackey who would be king not only acquired goons of his own, he even set up a rooftop driving range on his RV. (The Governor’s other former henchman, Shumpert, suffered from the real scourge that’s run most rampant this season: terminal anonymity. Shumpert’s disappearance merely rated a quick aside as Martinez worked on his stroke; sadly, Martinez��s bat-handling skills didn’t transfer to golf.)

Cantillo had a field day with ironic smirks as Martinez took Guv out on a catching-up supply run, where “Brian” impressed the aforementioned goon brothers Pete and Mitch with his ability to “regulate” the pair of walkers they came across in an abandoned cabin full of teeth-gnashin’ zombie noggins. (I guess collecting zombie heads is a thing postapocalypse.) But Martinez kept his former boss’s secret as the brothers shared their backstories over some brewskies, noting only that “family” had changed the Governor. Martinez kept the wry smirks coming when Lilly playfully poked into “Brian’s” past over a pleasantly buzzed lunch after everyone returned to camp.

Alas, the bonhomie was not to last. As Martinez shanked golf balls with Guv atop the RV, “Brian” lost his battle with his post-psychopathic stress disorder, brained his erstwhile lackey with a 9-iron, and fed Martinez to the walker pit. At least I think it was a 9-iron; the plot twist was so surprising, and the camera work so brisk, that I couldn’t properly ID the club. This season has offered very few surprises, so like Martinez, I was genuinely caught off guard. At first, it seemed Martinez’s crime was offering the Governor dual regency over his little ant-kingdom — probably because the Governor screamed “I don’t want it” while shoving his ex-employee down the zombie-disposal. But no, the Governor wasn’t taking the whole Cincinnatus thing to an extreme. Martinez’s real crime was being too chill. The Governor is a man with a mission, and that mission is protecting one blonde-haired child of redemption, no matter the cost. And while Martinez was a fun guy with whom to share a beer, he wasn’t the kind of man with whom you could trust your adopted family.

So, RIP, Martinez. Your cheery fatalism lightened the monotonous intensity that too often afflicts this show. And your presence alone all but made up for those stale clichés from Season 1’s bizarre low-rider episode. Jose Pablo Cantillo, you will be missed.

In the Land of the Dumb, Is the One-Eyed Man King?

Heavy hangs the head that wears the crown, as the Governor knows all too well. When freshly promoted goon brothers Pete and Mitch took over the mantle of leadership following Martinez’s convenient disappearance — by the way, what does it say about Martinez that everyone was so ready to believe he drunkenly stumbled into the zombie pit? — it took just one disastrous supply run for the Governor to realize that these rejects from a Farrelly brothers comedy would be no more able to keep his girls safe than Martinez. Mitch has the social skills of a glue-sniffing pit bull, while Pete was a proto-Rick. To his credit, the Governor didn’t immediately slip back into maniacal skulduggery; he first tried to flee with his girls in the middle of the night.

Unfortunately, a mud slick filled with walkers blocked their midnight run, so “Brian” returned to camp and did the only sensible thing: He whacked Pete and dumped him in the lake. Then, despite having literally stabbed Mitch’s brother in the back, Guv snake-charmed Mitch with the season’s single best line: “You join me, and I promise you’ll never have to worry about doing the right thing or the wrong thing, because we will do the only thing.” Pete’s fatal Rick-like mistake was refusing to raid a camp of fellow survivors, but the Governor has tangoed too long with the vacillating righteousness of the weak to stomach that kind of pre-zombie morality.

Not since Job’s much-vaunted return to Apple has a man with so ruthless a vision turned things around so effectively: The Governor wasted no time improving the barricades, rationing the ammo supply, and preparing his latest minions for the rigors of postapocalyptic thinking. Forgive me, but I have to say it: Tonight, we witnessed the birth of the iGuv.

Of course, total control is a pipe dream, especially with inadequate fencing, and little Megan’s game of tag almost made her zombie food until the Governor saved the day with some crack shooting apparently unaltered by his lack of depth perception. Like any great real estate agent, iGuv knew protecting little Megan was all about location, location, location. And there’s only one gated community in post-zombie Georgia good enough for his little angel.

And so we ended right back where we finished Episode 5: with the Governor standing enviously outside the prison’s inadequate fencing, watching Rick, Carl the Deviant Masturbator, Michonne, and Hershel working in blissful ignorance in their newly plague-free fields. Then, the Governor aimed his nickel-plated semiautomatic right at Michonne.

Rick or the Governor?

I asked this question in jest in Friday’s precap, but now we might actually have to give it some thought. Judging by these last two episodes, I wouldn’t be surprised if The Walking Dead TV community schisms into Grimesian purists and Governor apostates. If the Governor somehow managed to overcome Rick, would the show really suffer? Granted, it’s one thing to kick new life into a conversation by switching topics; it’s quite another to sustain that life.

But I think a case can be made that, right now at least, the Governor is more compelling than Rick. He makes pragmatic, if painful, decisions. He doesn’t subject us to a Sunday sermon every day of the week. And his people seem ready to survive in the new zombie order. Sure, iGuv’s not exactly stable, but at least he always surprises us. And there’s no whining about finding the will to keep going; you see, Rick and his gang (minus maybe Daryl, Carol, and Tyreese pre-crazy-eyes) seem to suffer from a bad case of the Rob Starks. They’re just too frustratingly self-defeating to allow viewers to really root for them.

Of course, this two-episode detour is likely just a dark fantasy that will vanish in the grim moral daylight of Rick’s agonized glares. As I just touched on, TV already has a riveting show that revels in the bloodbaths incurred by those who seek to thrive in an amoral world: Game of Thrones. But if you will, imagine for a second a show in which we watch a cunning, charismatic, ultimately unstable psycho lie to, manipulate, and destroy anyone who stands in his way, all for the sake of a family he claims to value more than his own compromised existence. Oh, wait.

Walker Kill of the Week

The show was too busy being interesting to throw us the usual rotted (albeit appreciated) red meat this week. Nonetheless, the Governor got in a classic bare-knuckle braining, taking out a walker in that mysterious cabin in the woods with just his Maglite. (No relying-on-sharp-objects cop-outs for the Governor, no siree.) However, I’d like to nominate Martinez’s death as an honorary Kill of the Week. The screams he issued while being devoured headfirst by a pit of ravenous zombies were absolutely first-class. Next week marks the end of Season 4’s first half, so it doesn’t require a Jobsian IQ to know that someone big will die. It’s just a matter of who, and how many. Although I’m tempted to believe tonight’s closing shot of the Governor taking aim in Michonne and Hershel’s direction was merely a tease, I’ll go out on that limb anyway: Hershel’s dead, and at least one other mainstay is as well.

Glenn and Maggie are too precious a couple to waste at the halfway point (and Steven Yeun is too invaluable a Conan O’Brien guest). Rick is protected by his cloak of righteousness, and Carl … well, he’s always off alone in the prison showers. If Scott Gimple & Co. kill Daryl, they’d risk having their throats slit by Comic-Con badges. Tyreese and Sasha are theoretical possibilities but unlikely candidates, and Bob Stokey’s alcoholism hasn’t come full circle yet.

That leaves the Governor’s ladies. Could it be angelic Megan? Or iGuv’s new concubine, Lilly? Let’s be honest. It’s Tara. She’s just one more sprained ankle away from being put down by iGuv himself.