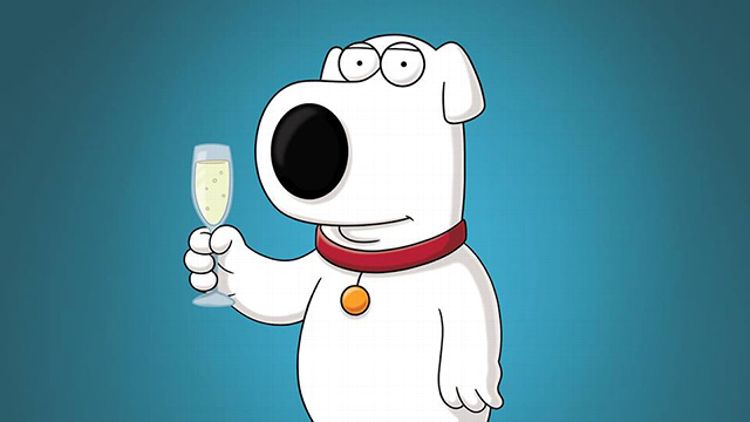 In a successful bid to break into the SPOILER ALERT!! market, Family Guy offed Brian, the Griffins’ pet dog/intellectual. The character had appeared in every episode of the show’s 12 seasons. Unlike the advance warning The Simpsons gave for an impending death this year, Family Guy seems to have surprised its fans. Not only was Brian’s demise unceremonious and ugly (a silver car fishtails around a suburban corner and barrels straight at Brian, seemingly intent to kill; Brian thumps under the wheels, mangled; a squirrel boots Brian’s face and says he sucked), but the aftermath was uncomfortably serious, set to soaring tearjerker strings. Brian’s death came with barely a punch line, but it also came with a replacement: Vinny.

“As soon as this idea came up, we started talking about what the next couple episodes could be and we got very excited about the way this change will affect the family dynamics and the characters,” executive producer Steve Callaghan tells E! about the switcheroo. Vinny is voiced by Tony Sirico, The Sopranos‘ own Paulie Walnuts. Callaghan says Vinny’s a rougher guy than Brian and that he’ll “call Stewie out on his B.S. freely.” Twitter has received the development warmly:

Well @FamilyGuyonFOX has destroyed their show. Vinny is a douche. Without Brian and Stewie’s banter the show is going to suck.
— Cat (@savannahharts) November 25, 2013

“As much as we love Brian, and as much as everyone loves their pets, we felt it would be more traumatic to lose one of the kids, rather than the family pet,” Callaghan reasoned with E!. Ah. Is he concerned about any potential backlash that might possibly occur, though? “I’m not, only because our fans are smart enough and have been loyal to our show for long enough, to know that they can trust us. We always make choices that always work to the greatest benefit of the series.” And next week’s episode? “It’s just a regular, run-of-the-mill episode. Well, actually it’s a super funny episode.” Anyway, farewell, TV dog.

The Road House Remake Seems to Have a Director. Are We Really Going to Do This?