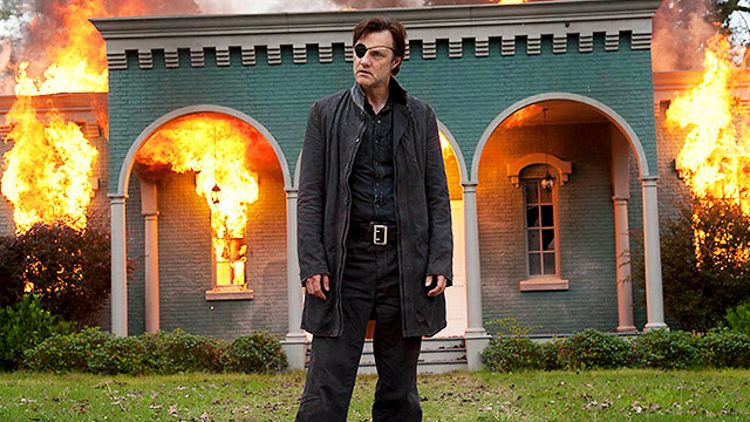 “Behold! The day is come, foretold by the IMDb, when he of the One Eye shall rise again and walk through the cul-de-sacs of the dead, fearing no bites. He shall save us from pestilence, and the boredom of watching it get cured. He shall wield a bone like a can opener, and there will be backgammon and oxygen for all.” —Book of Hershel, 4:6

That’s right, all ye Walking Dead faithful: The Governor is back! And for those of us who’d grown a tad weary of the West Georgia Correctional Facility follies, El Guv strode through last night’s episode like our own one-eyed savior, providing a radical change of pace as Georgia’s most bloodthirsty Grinch felt his villainous heart starting to grow. Forget Rick’s failed pig farm, Hershel’s existential crisis, or even Carol’s Williams-Sonoma self-defense classes: Episode 6 was all Guv, all the time.

Except that this Governor wasn’t last season’s psychopath rock star with the sexual charisma of a young Bill Clinton. For his return, the Governor rocked it acoustic-style. This was Philip Unplugged, minus the zombie cage matches and fish tanks full of severed heads. I was captivated by this flashback-story curveball, so much so that I looked past its less-subtle moments. But it’s been a while, and there’s so much catching up to do with our new bestie “Brian,” so let’s get to this week’s questions.

Was It Something He Said?

Before the Governor could take on his new nom de guerre (Brian Heriot), he had to shed his old identity. Cue the symbolic fires! Not be outdone by Ranger Rick’s Old Timey Bacon BBQ, the Governor experienced not one but two symbolic conflagrations on his route to rebirth. The first saw him mute, slack-jawed, and dead-eyed, staring into a bonfire as a walker literally blazed through it toward him. Whether it was the failed panty raid on Rick’s prison or repressed remorse over feeding codependent ex-girlfriend Andrea to zombified codependent ex-BFF Milton, the Governor was a little too blasé about becoming a midnight zombie snack. Fortunately, his trusty henchman Martinez — he of the great bat swing mechanics — did the Governor a solid by plugging the flaming fiend as it inched closer.

But apparently the only thing more inexcusable than summarily executing your own troops in a maniacal fit of rage is being a Bettie Bummer around the campfire, because Martinez and minion no. 2, Shumpert, left the Governor high and dry the next morning. What’s the first thing you would do if abandoned by your former goons and devoid of all will to live? Set crap on fire, of course. El Guv did it in style, ramming his way into the now deserted Woodbury in a semi and making the town his own personal, soul-cleansing Burning Man. Next, he wandered the empty roads of Georgia. Actor David Morrissey treated this opening sequence like it was a cut scene from Cast Away, growing a long beard and half-heartedly dodging threats until collapsing on the road to die.

Just when all hope seemed lost for our poor, bedraggled mass murderer, Guv looked up and saw in an abandoned apartment window a vision of the precious daughter he’d lost twice, once to zombification and once to Michonne’s katana. It was a quintessential Road to Damascus moment — just with less religion and more zombies.

What’s the Going Exchange Rate for Acts of Redemption?

Based on Sunday night’s episode, it’s one blonde-haired little girl to hundreds of innocent townsfolk — give or take a relative with Stage 4 cancer. That’s what the Governor found when he searched the apartment building: Megan, the aforementioned redemptive child; her kindhearted mother, Lily; her auntie Tara, who claimed to be Atlanta PD; and her cancer-ridden grandfather, who was attached to a nearly drained oxygen tank. Tara, a lesbian, didn’t immediately succumb to the Governor’s usual charms. (Sexual orientation aside, the presumably bug-infested hobo beard probably didn’t help.) It took Tara half a second to stick a gun in the Governor’s face and confiscate his weapons. That whole cathartic bonfire must have really mellowed him out, because Guv just kind of went with it. He claimed to be Brian Heriot, sole survivor of a group whose leader had lost it and gone postal on everyone. He conveniently left out that he was the lunatic leader in question.

Most viewers probably expected some ploy or murderous rampage, but it seems the Governor has truly gotten that out of his system. After Lily brought him some welcome canned pasta, “Brian” risked a journey into the apartment of Grandpa’s friend to get a new backgammon board for little Megan. (“Brian” also put down Grandpa’s friend, who’d long since zombified in the bathtub following what looked like his still-human suicide attempt.) The next morning, Lily came by with a gift basket loaded with supplies. However, she also asked the talented Mr. Heriot for another favor: Her father, Don, was dying, and if Don didn’t get another oxygen tank soon, little Megan would lose her only backgammon partner. Would Brian mind swinging by the old folks’ home around the corner to pick up any spare O2 he might find?

Apparently, Lily had him at “Megan,” because the Governor made a beeline past the zombie seniors and right for the oxygen tanks, then battled a geriatric horde to get two of the tanks back to Don. Then, as Lily went to fetch some balm for his cuts, she left “Brian” with Megan and her endearingly adorable questions about how he lost his eye. And when “Brian” was about to leave for realsies, Lily made clear what had been obvious from the get go: El Guv had a new family. Sure, we could see this coming a mile away — Megan’s doe eyes were like the headlights of an emotional freight train headed right for the Governor’s hardened heart — but I can’t lie: I was still moved to see the Governor clean-shaven and playing chess with Megan after an appropriate time lapse.

Of course, good things never last long on The Walking Dead, and when grandpa finally kicked the bucket and turned in front of his grieving daughters and granddaughter, the Governor sprung to action and bashed in Don’s head with the aforementioned oxygen tank. Children don’t take it well when you brain their loved ones right before their eyes, so Guv and Megan’s relationship hit a little hiccup.

But there’s no better way to salvage tattered emotional bonds than with a family road trip!

Seriously, What Cologne Does the Governor Use?

The man’s an Axe Body Spray ad just waiting to happen. It wasn’t long into the trip to who-knows-where before an antsy Lily threw herself at “Brian” while Tara and Megan slept soundly next to them — really soundly, I hope. Unfortunately, the Governor’s mobile love shack blew a gasket the next morning and the group had to proceed on foot.

Apparently, Tara has the gift of perfectly bad timing, because she sprained her ankle just as the group encountered a horde of ravenous walkers. With mommy helping lame Aunt Tara, Megan quickly mended fences with the Governor as he scooped her up to safety.

Unfortunately, safety meant a pit full of walkers, into which the two promptly fell. But Guv had pinky-promised Megan he’d keep her safe, and “Brian Heriot” is a man of his pinky-word. The Governor indulged in Tyreese’s patented zombie rage therapy, dispatching the walkers before Megan’s ever-wider eyes.

When Guv looked up, whom should he find but his old pal Martinez, standing right over the pit, automatic weapon ambiguously angled down?

Walker Kill of the Weak

Morrissey was a one-man walker-wasting band this week. And while bashing in Grandpa Don’s face with the business side of an oxygen tank deserves a thumbs up on both a dramatic and pyrotechnic level, I think everyone will agree that the Guv’s pit rampage was pure masterpiece: “Brian” put Tyreese and his hammer of therapeutic violence to shame.

The Governor went back to basics, demonstrating that all you need to create zombie splatter art is your bare hands and the right perpetually suppurating emotional wound. In any other episode, the Governor’s first two head-thrashing, throat-ripping kills would have been the highlight. But in a stroke of pure inspiration, the maestro took a human femur and used it to sheer the top half of the final pit walker’s head all but clear off, like running a hot knife through tendon-butter. Love is a dangerous thing in the zombie apocalypse. Now that the Governor’s got something to lose, rest assured: He will lose it. Based on the scenes from next week, it looks like we’re going to stick with the Guv and his new adopted family for another episode, so I’d say one or all of his girls will face imminent danger. Plus, we’re near the midseason break. Tara’s probably toast, and Lily all but signed her death warrant with that late-night tryst. Worst of all, Megan’s centrality to the Governor’s redemption arc is like a big “Bite Me” tattoo across her neck. And of course, Megan hasn’t gotten the benefit of Carol’s preteen boot camp. All three of the Governor’s ladies are fair game.

Kenny Powers Hall of Fame: Our Most Special Eastbound & Down Memories