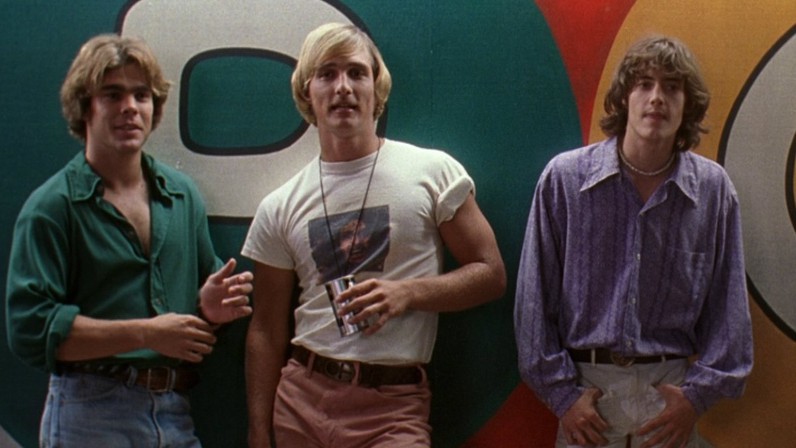 Richard Linklater’s gotten so much deservedly good press for his latter-day output that it’s important to remember one thing: If he’d, chas v’chalila, plummeted off the ends of the earth the minute after getting Dazed and Confused in the can, he’d still be a necessary recipient of our endlessly gushing praise. More than 20 years after its release, Dazed holds up as a beautifully unforced evocation of time and place, its easy grace and loose rhythms an all-too-rare thing — often imitated, never duplicated.

And if you happen to agree, well, we’ve got some good news for you, pal: THR reports that Linklater’s That’s What I’m Talking About, his long-planned “spiritual sequel” to Dazed and Confused, might actually happen. “Talking About is [a] passion project for Linklater,” explains THR, “and the filmmaker would love to capitalize on Boyhood’s heat to make this one a reality.” An important lesson here for aspiring filmmakers: If you wanna make your passion project, just spend 12 years filming a top-secret, highly ambitious, structurally innovative movie and wait for the heat to roll on in.

Linklater’s been talking about this off and on for the last few years at least, telling Collider in 2009 that it was “that’s one more project I couldn’t get off the ground.” “I carefully called it a ‘spiritual sequel,'” he explained, “’cause it’s not the same characters. If Dazed was my high school, this is my college. It’s about a weekend in college … and I thought it was the funniest thing I ever wrote … young men behaving really poorly. It’s closer to The Hangover than anything else out there. It’s young guys really getting plowed.”

THR has a slightly different description, saying “The project … is based on Linklater’s life” and “follows freshmen as they navigate through the first year of college life, while trying to make the baseball team.” The baseball part jibes with the way Linklater has described it before and, yes, his own background: He went to Sam Houston State on a baseball scholarship, but by sophomore year a physical condition, serendipitously, gave him more time for the arts. The New Yorker, in its great recent Linklater profile, had the details:

As the second semester of his sophomore year began, he was the team’s starting left fielder, batting third in the preseason lineup. Yet he wasn’t entirely satisfied. “I remember daydreaming out in the outfield: I wish I had more time,” he says. “I want to read ‘The Brothers Karamazov.’ ” His wish came true, in perverse fashion. He contracted an infection of the heart tissue, which caused an arrhythmia. Suddenly, he couldn’t play, doctor’s orders.

“It was like fate had gone, O.K., guess what?” he says. “My whole second half of my sophomore year, during baseball season, I closed down the library every night. I’d be up there writing.”

But presumably, though, that “first year of college” is a misrepresentation of the material? Seems like the most important aspect, in replicating the Dazed aesthetic, would be maintaing the brevity of the hang. Also, Linklater himself said it was a weekend, multiple times — specifically, the weekend after you move in but before school starts: “It’s all that partying you do before the first class” — so let’s not confuse ourselves here.

Furthermore: In 2012, talking about Talking About with Matthew McConaughey at SXSW, Linklater seemed to have perhaps suggested there might be room for a cameo from a one Mr. David “Woody” Wooderson. From The Playlist:

You two have enjoyed a great partnership for so long, and it started with “Dazed and Confused.” You mentioned in the past you might make a “spiritual sequel” to that film — what’s the status of it?

Richard Linklater: It’s not really a sequel; that’s a word that just kind of comes out. They’re not the same characters. For me, it’s just college — it’s college, and now those characters, it’s coming up on 20 years since we shot that though.

Matthew McConaughey: Wooderson’s hanging out in LA clubs with a couple of chicks — he’s still dialed right in.

Linklater: Yeah, we know that. Wooderson’s doing just fine. You could be dating college chicks still (laughs). So yeah, I don’t know how that fits in.

So Wooderson’s probably in it, and it’s got a bunch of college kids possibly vomiting, and it’s a goddamn spiritual sequel to Dazed and Confused? Please, universe, let this happen this time.