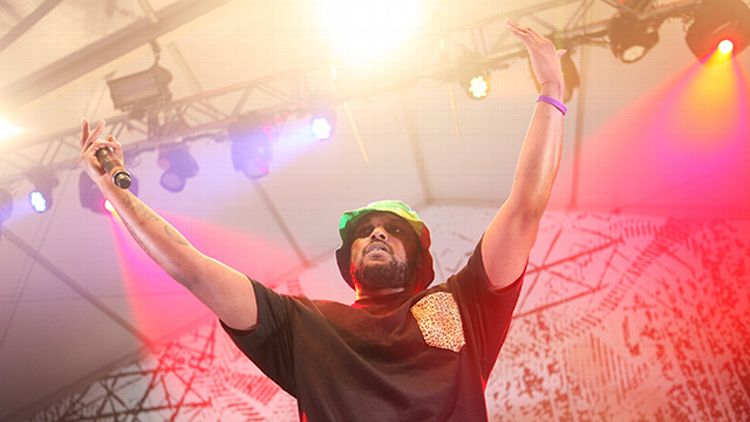 Schoolboy Q is having a phenomenal time in Austin.

As the second most famous member of the Kendrick Lamar–led Top Dawg Entertainment crew, Q had a great deal to celebrate on Wednesday, with a headlining position at SXSW staple THE FADER FORT Presented by Converse and then a cameo across the street at the Spotify Live compound to crash Kendrick’s headlining set.

Beyond rapping, one of the hallmarks of Schoolboy’s appeal (along with one of the reasons I didn’t mind seeing him twice in less than three hours) is that he’ll say anything and do anything and, more often than not, people will enjoy it.

After coming out on the Spotify stage and performing his song “Hands on the Wheel,” he took the microphone and, upon realizing that the stage was set up like a catwalk, suggested that there was something he’d always wanted to do.

Kendrick, usually one to favor the serious face over the Kool-Aid smile, couldn’t help but grin and play along as his goofy friend took over his show for two minutes, not seeming to care that this was an extremely high-profile event.

Just hours earlier, when it was Q’s stage to control, he went through his hits, but also playfully insulted most of his favorite colleagues, much to the amusement of all in attendance:

After playing his A$AP Rocky collaboration:

After asking the Fader people to put him on the cover of their magazine:

After bringing Kendrick Lamar onstage for “Backseat Freestyle,” and then kicking him off:

After bringing Action Bronson onstage, performing a song, and then kicking him off:

“Everybody say ‘Fuck Action,’ that verse was too hard, get yo ass off the stage.”

He also referred to Action Bronson, a fabulously white, bearded man, as his “white n—-.” And then went on about the point in songs where the White audience doesn’t say the n-word, but how everyone gets a pass today, establishing a consequence-free space perfect for a song liked “Blessed.”

Almost a year ago to the day, I wrote about my experience at a Jay-Z show at SXSW that for me centered around the moment when the intimate crowd had the option of saying or not saying the n-word. Since that show, I’ve been waiting for an opportunity to see that moment recur, forever in amateur sociologist mode, wanting to see how this phenomenon evolves. Watching Schoolboy work the crowd yesterday, I wasn’t necessarily prepared for his call, or the audience’s eager response, but I certainly wasn’t surprised by either party.

One of the interesting aspects of what’s happening as hip-hop’s audience gets less predominantly black is that the desire for the word to be screamed has increased, not just with respondents, but with rappers also. For a long time, many assumed that the white people in this scenario were just dying to say the n-word, and the rappers (and black audience members alike) were waiting for someone to “slip up” so they could be reprimanded. While this concern does still exist to some extent, it’s already beginning to feel like ancient concert-going history. Caring either way about it seems to be something of the past.

Or maybe the rappers, and to some extent the black audience members, have just given up. Life’s often about picking battles, and perhaps this one has become too small to expend energy over.

What is certain is that hearing the word screamed by everyone is getting increasingly less awkward, which, if you think about it, is extremely awkward.

Concluding my Jay-Z piece a year ago, I made the following statement:

My personal beliefs on the matter are irrelevant, but if you insist, I guess I’ll say that the action by some of our more famous, influential black celebrities to aid in the okayification (or “deconstruction,” if you must) of the word by launching it to the forefront of the pop culture sphere is something I believe to be a good thing. What’s problematic, however, is the process of pretending like the word doesn’t exist. Trust me, it’s real. The decision to say it or not say it is very much up to the person, and I respect that, but it’s real and if you are one who has no issue with it being a part of your own vernacular from time to time, you really haven’t a right to censor anyone else.

I don’t know if I agree with this argument anymore — at least, not the first half of it. I don’t necessarily think it’s a good thing that the word is being thrown around so unabashedly; I don’t know if it thrills me as much as it did last time I was in Austin. Maybe it’s because I spent a year attending concerts where I was the one kid that didn’t scream “n—-” at the top of my lungs, because I didn’t want to perpetuate the idea that the word means nothing.

But, then again, maybe it was finally my turn to feel awkward about this. Who knows? I’d be lying if I said I fully knew where I stood.

Let’s pick this back up next year. Same n-word time, same n-word channel.