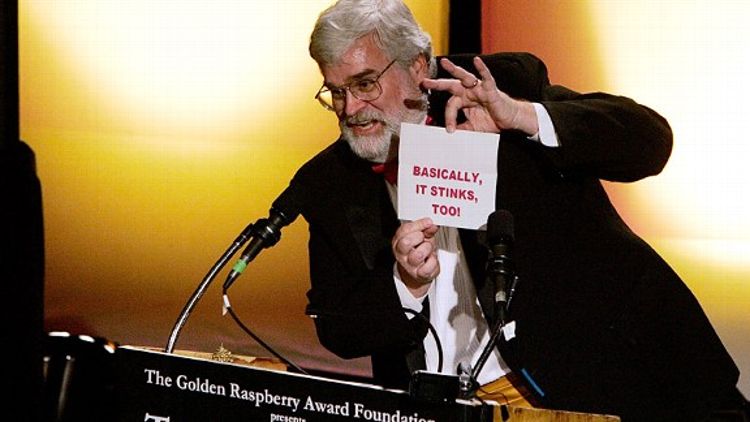 With Golden Raspberry ballots out to voting members and the nominations less than a week away, stars’ Razzie hopes rest with one man: bearded impresario John Wilson, who started the Razzies 31 years ago and has been running them ever since. Wilson was gracious enough to take time out of his incredibly busy schedule to talk to RazzieWatch. After we finished hyperventilating, we did a darn good job interviewing our only personal lifelong hero!!!!!!

RazzieWatch: Thank you for talking with us!!

Wilson: Thank you for understanding about the confusion last week about whether you’re part of our group or not. Not that anyone would necessarily be proud to be, but —

RazzieWatch: Are you kidding? Oh God, it’d be an honor!

Wilson: Well, wait ’til you have to sit through a lot of this stuff. That’s the downside. Five minutes into Jack and Jill I’m thinking, “I really wanna walk out.”

RazzieWatch: Have you ever walked out of a movie even though you knew it’d be a Razzie contender?

Wilson: Certain ones I give myself a pass. I had no intentions of making myself sit through Human Centipede: Part 2. I haven’t seen Bucky Larson.

RazzieWatch: That’s genius. They’re both obsessed with Hollywood and one man trying to be a star. How does the nomination process work?

Wilson: Throughout the year we keep a running list of everything that’s been released — which for 2011 got up to 675 titles. On average there’s a movie a week that’s a real Razzie contender. There are 50 or 60 potential contenders — way more than would be discussed on the Oscar end of the scale. We encourage the members to at least try and see this stuff.

RazzieWatch: Do you have any way of enforcing that, or is it the honor system?

Wilson: We can’t prove that someone saw Jack and Jill.

RazzieWatch: You give suggestions in each category on the nomination ballot, but won’t send press like us that ballot. Why?

Wilson: Only because I think it’s confusing! Some guy a couple of years ago misunderstood what the nominating ballot was, and he posted it and it went viral, and it totally screwed us over. It took us days to make it clear to everyone that these aren’t the official nominations. I get, what are they called, Google news alerts? A couple of people have listed what’s on the ballot and we discourage that among the members. [NOTE: Out of respect for the institution of the Razzies, RazzieWatch WILL NOT be linking to these supposed leaked ballots. AS IF!] But we list suggestions on the ballot because if you don’t cull stuff, you never get any kind of consensus.

RazzieWatch: Do you recognize write-in votes?

Wilson: Oh yes we do. Occasionally if enough people write something in it could get nominated.

RazzieWatch: Do you use a weighted ballot the way the Oscars do?

Wilson: We used to ask the members to allot points: 5-4-3-2-1. Back when it was 150 members, that was fine. But now that there are too many people, that’s just too much math. I do wait to vote, as Head RAZZberry, until all the ballots are counted, so if there’s a tie I decide, well, do I break it.

Wilson: The year Madonna and Britney Spears were tied for worst actress, I just didn’t vote. I allowed the tie; I just thought it was funny.

RazzieWatch: We want you to not get offended by the next question we’re gonna ask you.

RazzieWatch: How sacrosanct are the ballots? If you heard through the grapevine that a certain celebrity might be willing to come to the ceremony if they won the Razzie, would you be inclined to make sure they won in order to make the ceremony more entertaining?

Wilson: We don’t dick with the results. If someone publicly says they’re going to show up if they win, that’s gonna come to the attention of the members. The fact Sandra Bullock publicly said she was gonna show up got her more votes. This is going to sound like I’m a little bit full of myself, but I actually think some of the goodwill that was expressed for Sandra Bullock when her husband turned out to be a total shit the week after the Razzie/Oscar weekend — I think some of that goodwill was because she had just accepted a Razzie and everyone loved her for that. It wasn’t just that she won an Oscar.

RazzieWatch: Do you have a venue picked out for this year’s show?

Wilson: We have one on hold. We’ve been in Hollywood so many years, but we might do it in Santa Monica this year. We and the Spirit Awards, it’s a friendly rivalry, but the media want to be able to cover both, and they’ve been grousing the last few years about having to schlep from Santa Monica to East Hollywood.

RazzieWatch: Could you guys be on the beach too, the next tent over?

Wilson: One of the years we got the least coverage was when President Bush so brilliantly chose to invade Iraq the night before Oscar weekend. We were in Santa Monica that particular year. Admittedly a war is bigger news than the worst movies of the year, but given my opinion of the war in Iraq it was especially frustrating to me.

RazzieWatch: Did that help to spur on Bush administration Razzie nominations in later years?

Wilson: No, no, I just put them on there to be funny! I actually expected Ben Affleck to win Worst Actor for the second time in a row. But it was a landslide.

RazzieWatch: Is there a similar political figure who is on the nomination ballot this year? Can you reveal that information?

Wilson: Among the names listed for Worst Actress is Sarah Palin in her documentary. But she’s not getting that many votes.

RazzieWatch: Thank you very much! It’s such an enormous thrill to talk to you.

Dan Kois is a veteran Razzie guru who really believes Adam Sandler has a shot at breaking Eddie Murphy’s all-time record for individual Razzie nominations in a single year.

Previously:
RazzieWatch: For Your Consideration! Bad Actors in Good Movies
RazzieWatch: Inside the Hot-N-Heavy Razzie Campaigns!
December Razzie Odds: Can Iron Lady, We Bought a Zoo, or New Year’s Eve Go All the Way?

Todd Glass Comes Out on Marc Maron's Podcast: 'When Are You Gonna Have a Little Blood on Your Shirt?'