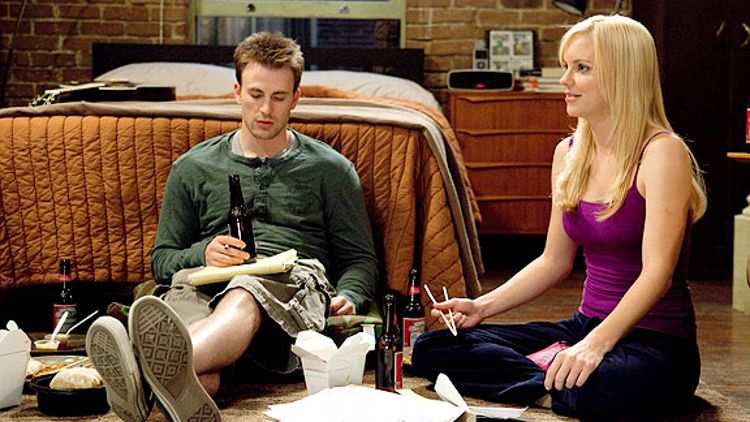 Mindy Kaling’s great “Flick Chicks” piece in this week’s New Yorker (an excerpt from her forthcoming book) attacked common female-character cliches in romantic comedies (Sassy Best Friend, Love-Starved Type A, Sexy Klutz, etc.) But what of the menfolk and their tropes? Every romantic comedy needs a dude willing to do what women do in most movies: Stand around and wait for the main character to take some action and make all the crucial decisions that will ultimately determine their fate.

Like a femme High Fidelity, What’s Your Number? takes the traditional romantic comedy suitor and multiplies him by thirteen. The whole movie seems like it might just be a ruse to find the next big male romantic-comedy lead. We divvied up the What’s Your Number? harem of actors and assessed their chances at romantic comedy guydom. Since we can’t cast Ryan Gosling in everything all the time, there will have to be some alternates.

1. Chris Evans
Chris Evans! He is the subject of profiles in which he’s cool enough to realize that Sunshine is his best movie and Not Another Teen Movie is underrated. He will play the cad realizing his true love in right of front of him all along. He’ll have a long career playing preppy professionals, politicians, and other perfect guys whose perfect girlfriends just don’t make them laugh like that awkward brunette at the wine store.

2. Aziz Ansari
Would I like to see a movie with Aziz as the romantic protagonist? You fucking bet. Would Ansari like to play a seriousish character in a movie? I’m not so sure. He is still more in the “The New Workout Plan” phase of his career than the “Love Lockdown” one. But who’s to say the potential Raaaaaaaandy movie couldn’t handle a romantic subplot? Or that he couldn’t headline in some little indie hipster rom-com that can’t afford Joseph Gordon-Levitt? Or obliterate Anthony it as the Ben Stiller yuppie in an updated Reality Bites?

3. Anthony Mackie
Criminally underused in films, Anthony Mackie wouldn’t seem to have that much reason to foray into unchallenging rom-com roles. A vehicle worthy of his talent would allow him to flex his serious acting muscles but also show off his lighter side. Maybe Mackie should star in a project for David Gordon Green, who could marry the gritty comedy of Pineapple Express with the dreamy romanticism of All The Real Girls.

4. Chris Pratt
Chris Pratt, Anna Faris’s real-life husband, has become known for playing Andy on Parks and Recreation, but was previously a Dawson knockoff on WB drama Everwood. Thinner, he looked like a volleyball playing-dick, a life-ruining Zabka. Now he looks like the guy in the drug rug who lived on your dorm-room floor. Literally lived on the floor, in the hallway. And for whatever reason it kind of suits him better. That guy always seemed chill, you know? Chris Pratt can crawl into the “cuddly stoner” niche Seth Rogen carved out.

5. Andy Samberg
Samberg is at a career crossroads, phasing out of SNL. His film career, aside from Hot Rod, has involved a lot of wacky cameo turns in romantic comedies. He will be in the Aubrey Plaza starrer The To-Do List (formerly The Hand Job) and Rashida Jones’s screenwriting debut Celeste + Jesse Forever, in which he finally plays a romantic lead. But does Samberg really want to play romantic leads? John Krasinski seems to have the doofy tall white-guy sector covered. Maybe (in a 69 with Justin Timberlake’s career) Samberg will go completely into music. Plenty of “Lonely Island” songs could have been radio hits. He should assume his rightful position as the Ray Stevens of New Jack Swing.

6. Joel McHale
McHale has a lot of room for versatility; he could play Dean Wormer or Otter equally well (in the Animal House comedy phylum pyramid). That said, I feel like character types and villains are his calling. I look forward to seeing McHale as douchey bosses, cheating husbands, country club rivals, and other evil white people in mainstream comedies.

7. Martin Freeman
There is always an opening in the rom-com universe for a bumbling Englishman (Hugh Grant can’t do everything himself, you know). Must be able to woo young American lasses by muttering asides like “terribly sorry” and failing to understand U.S. romantic customs in ways that lead to delightful misunderstandings culminating in true love.

8. Zachary Quinto
Zachary Quinto’s finest romantic comedy to date is Star Trek, wherein he finessed the romance between Spock and Uhura, two of the fleet’s steeliest crewmembers, into a flash of cool sexual tension and subtle one-upmanship of the earthlier Captain Kirk. His romantic-comedy model could be Cary Grant, who had a similar talent for inflecting his eyebrows with subtle emotion even as a pithy comment was coming out of his mouth.

9. Dave Annable
The former No. 7 sexiest man alive. This guy was basically genetically engineered to play the generically handsome love interest in B-list romances, TV movies, and soaps. His biggest stumbling block is the last name, and his largest credit is Brothers & Sisters. Barring some kind of disfiguring accident he should make a healthy living in rom-coms.

10. Thomas Lennon
Are you allowed to make a new comedy without casting Thomas Lennon in a bit part? The answer is no, you aren’t. And he always kills, as some variation on “clueless fop.” The names of some recent Lennon characters: Carl Halabi, Fyodor, Acting Captain Glen Frenchman. In this movie he plays Dr. Barrett Ingold, and he is in about half of the trailer.

11. Mike Vogel
Vogel is a former teen jeans model who is getting a push this year (he’s also on Pan Am and in The Help) after a stint playing skater love interests and horror-movie kills. He’s good-looking in a manner that neither offends nor intrigues. He seems like the kind of actor that will turn up on a new TV show every few years forever, with occasional films.

12. Ed Begley Jr.
Kind of a dark-horse contender considering he plays Anna Faris’s dad, but one thing I really admire about Anna Faris is her willingness to go all the way for a joke. Sincerely, the world’s foremost (and possibly only) Observe And Report superfan.

13. Oliver Jackson-Cohen
All I could really find out about this guy is that he’s hot and British and has a quiff. So while the Britishness would seem to bump him up a few spots, the quiff detracts down. Pompadours can go two ways: Efron or Duckie, and I’m afraid this is straight Duck Man.