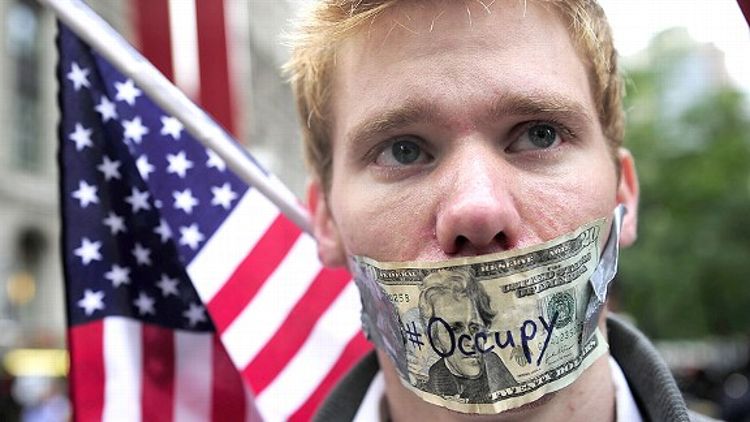 Radiohead didn’t show up to play the Occupy Wall Street protests, as was rumored late last week. But Jeff Mangum of Neutral Milk Hotel did. It’s a little like expecting the 82nd Airborne Division and getting the Luxembourg Navy, and that makes it all the more fitting. The protests will likely end up a lot like Mangum’s career: a yelp from the margins riding a momentary unfocused energy likely to collapse into itself before it takes any real shape.

Unless you’re the kind of person who spent more money on library fines than clothes in 1997, Neutral Milk Hotel weren’t even a blip to you. But for a second they were the hot shit in Lilliput: two very good albums of tweaky lo-fi indie rock on the label that’d later put out Arcade Fire. Mangum’s surrealist songs (about two-headed boys, the King of the Carrot Flowers, and the ghost of Anne Frank) and truth-hungry twee-trumpet of a voice were striking. Put those records on now and they still are. But just as he was peaking with promise, he dropped out of view, literally disappearing after 1998’s In the Aeroplane Over the Sea (which became a cult classic in absentia).

In 2003 or so I heard he was holed up somewhere in deep in Brooklyn listening to nothing but Balkan folk records and subsisting on takeout burritos administered by a girlfriend. He hasn’t recorded anything in thirteen years and he’s only recently returned to play a couple of shows, including last weekend’s All Tomorrow’s Parties festival and, now, the pinko jamboree in Zuccotti Park. Certainly, the half-hour of video below (which has been viewed by half of Williamsburg and counting) is by far his highest-profile performance in over a decade; appropriately, it starts in the middle of a song and you can’t see his face at the beginning. This is a guy who may never really come back into focus again.

The abbreviated song in question is “Themselves” by ‘80s punk lefities the Minutemen, self-described “corndogs” with hearts three sizes too big (and guts three sizes bigger than their hearts) who wrote short, bracing punk-funk-jazz-folk songs with titles like “Do You Want New Wave or Do You Want the Truth” and “The Roars of the Masses Could Be Farts.” On their 1984 masterpiece Double Nickels on the Dime, “Themselves” is a tense, wrathful lament; singer-guitarist D. Boon sounds like a pissed-off grizzly bear and turns his instrument into a scythe as he sings the song’s two verses: one about how the fucked-over masses ought to get together and “take a stand,” followed by one about how impossible that is in a world where the guys who do the fucking over “keep themselves hidden away … up on the hill / Afraid that they’ll have to pay / For all the crimes upon their head.” That’s the verse we see Mangum sing, and with his acoustic guitar, parched voice, off-the-grid backstory, and Kodiac Island cannery-worker look, he sounds like he’s just wandered out of the wilderness like some prophet of impotence; he’s a Robespierre who knows he’s never going to give his guillotine the test drive it — and his enemies — deserve. A big Radiohead show might give Occupy Wall Street a false sense of its power; this reminds it of how far it has to go.

People who make fun of protest songs for being grating and no fun have a point. People who make fun of them for being “too simplistic” miss one. They’re not here to propose legislation or frame a program or out-nuance a David Brooks column. Usually, when they try to do those things they fail anyway. They’re no different than love songs or car songs or songs about teenage dreams or strip clubs on Mars. They put flesh on feelings. When they really work, especially in an up-for-grabs, leaderless, centerless moment like Occupy Wall Street, they match emotional certainty with intellectual uncertainty. Even if the protestors didn’t realize it just then, that’s what Jeff Mangum gave them.