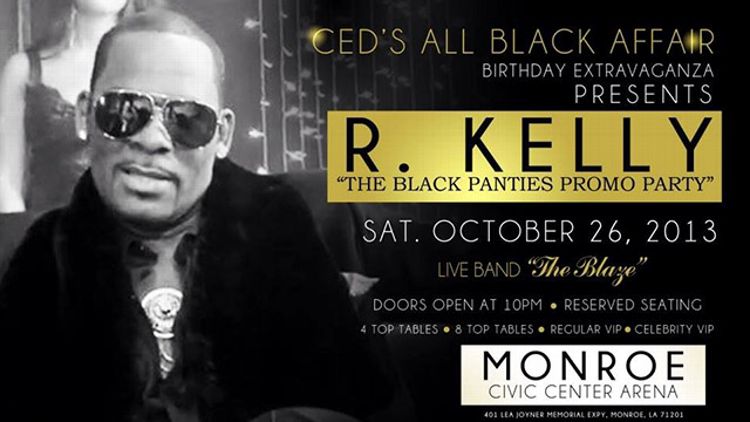 There may be a make-believe R. Kelly in our midst, and this matters. Not only because Kellz might have fudged a concert or had his likeness taken advantage of, but because we don’t want Lady Gaga impersonators playing Staples Center in a few years while we gladly cough up our last 200 zombie apocalypse dollars just because this is how things have come to pass. It all would have begun with Ced’s All Black Affair Birthday Party Extravaganza Black Panties Promo Party in Monroe, Louisiana, on Saturday, October 26, 2013. We have to get to the bottom of this now, before it’s too late: Was or wasn’t Robert Sylvester Kelly onstage for four minutes that fateful night?

If we stop here, with KNOE’s Perd Hapleyan report and the network’s anonymous source, it seems plain: “It was an impersonator onstage impersonating R. Kelly, that may have sung every bit of four minutes, not even a complete five.” Not even a complete five. That’s not enough time for this performer to do a single thing that makes him who he is. “We was scammed because 10 o’clock we were there, no R. Kelly. 11 o’clock no R. Kelly, 12 o’clock no R. Kelly, 12:45 no R. Kelly. 1 o’clock here comes an impersonator.” That is so many different times for R. Kelly to not appear in front of some people who paid as much as 150 pre–zombie apocalypse dollars per ticket.

The same unlucky concertgoer says she saw Non-Kelly in a restaurant the next morning; photo ops were vehemently denied, and the superstar/nobody wouldn’t speak with fans. This, combined with the eyewitness’s report that the man onstage was lip-synching — and, though wearing a Bulls hat, fairly disguise-y looking — bodes poorly for the investigation. Let’s keep this in mind as we move to …

Whoever’s on this stage, we’re not figuring it out from this video. What we can deduce is that the eyewitness was wrong in saying Kelly was lip-synching, which isn’t and never has been the same thing as using a backing track, and that she was almost dead-on about the “not even a complete five minutes” comment. After that point, the dude just kind of starts talking, milling around the stage, doing a little lackluster a cappella. Sad balloons, the opposite of what anyone expects when they’re attending a Birthday Party Extravaganza, descend. People start laughing, yelling, and eventually telling Non-Kelly to shut up.

The event promoter, Ced, one Cedric Johnson, reportedly texted KNOE saying, “I’m sorry. I got duped.” The text went on to say that refunds would be given. Later Ced contacted KNOE saying the messages didn’t come from him, making it a #doubledupe. No one seems to know about refunds now. Mysteries on mysteries.

We don’t know his age, background, or favorite R. Kelly song. We know his ability to promote is ferocious. On Monday, Ced told his Facebook faithful, “A STATEMENT WILL BE GIVEN ON TODAY AS TO WHAT ACCUTALLY HAPPEND [sic] AT THE PARTY.” No statement yet.

R. Kelly’s rep has reached out to Pitchfork, “saying the person at the event was indeed R. Kelly. They also note that the event was billed as featuring an ‘appearance’ from R. Kelly, not as a full concert.” That explains the four minutes. Four minutes is just an R. Kelly–ish amount of time to plan an appearance.

Kelly himself hasn’t said anything except that he had fun at a show in Mississippi the night after he did or didn’t hit up Louisiana.

And then, as I was mid-investigation, he said one more thing:

Was the performer actually someone called R. Jelly, a name that has popped up here and there despite its almost total inability to swim through Google results for R. Kelly? Unlikely. For either R. Kelly or Ced to deem a guy worthy of fooling a few thousand people, that guy would have to at least have a website.

Was the Monroe Civic Center, “a full-service, multi-purpose facility” that “features a variety of options to suit your meeting needs” and hosts concerts as well as “conventions, trade shows, and other events,” cool enough for R. Kelly? If the price was right, sure, why not? Tickets were on sale for six weeks — through Ticketmaster, which is like the blue Twitter verification checkmark of ticket sales — and the event was being promoted even further back. If R. Kelly wasn’t planning on doing this show, he or one of his people would’ve put a stop to it.

And as I was closing in on the final movement of my Scooby Doo–style symphony, Monroe Civic Center event coordinator Sharon Traxler answered the message I’d left inquiring whether R. Kelly was really there on Saturday night. She said one word, and it was “Yes.” Her email signature is “One City, One Future,” which tells me they’re ready to move on in Monroe. And you what know? I think we could all learn a little something from the attitude of that city and its civic center’s event coordinator. It’s too bad R. Kelly didn’t have it in him to give more than four minutes on a Saturday night in October, and that he couldn’t make those four minutes beautiful and white-dove–filled enough to convince everyone that he was who he is. But not every All Black Affair Birthday Party Extravaganza Black Panties Promo Party can be a legend.

One R. Kelly, one future.