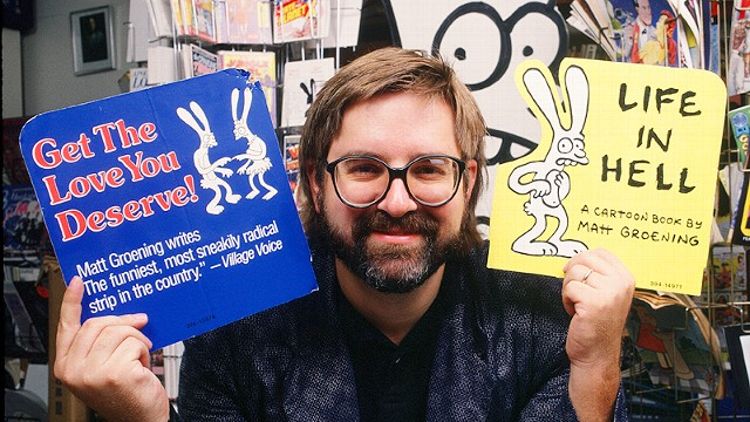 Today, Groening’s best known for creating The Simpsons, which in addition to being TV’s longest-running scripted prime time series — 23 seasons and a movie, with no end in sight unless and until Fox gets tired of ponying up the equivalent of a small island nation’s GNP 22 times a year to retain the services of Hank Azaria and/or his jar-preserved head — is inarguably his greatest contribution to popular culture, not to mention Rupert Murdoch’s. But The Simpsons didn’t really become The Simpsons until it passed from Groening’s hands. As an institution, it belongs as much to the storied lineup of writers, producers, actors, and animators who’ve kept it alive and (countless Worst Episodes Ever notwithstanding) reasonably funny for more than two decades as it does to Groening.

Life in Hell was Groening’s alone. After graduating from Evergreen State and moving to Los Angeles in 1977, he started self-publishing it as a comic book, selling the early issues alongside the punk zines at Licorice Pizza, the Sunset Boulevard record store where he clerked. He sold his first strip to the “gourmet bathing” magazine WET one year later. In 1980, Life in Hell began appearing in the pages of the Los Angeles Reader, the weekly paper where Groening worked as a paste-up artist, music columnist, and occasional delivery driver. A few years later, the Reader fired Groening in a dispute over money, and the strip moved to the LA Weekly; by the mid-’80s, it was a regular feature in alt-weeklies across the country.

L.A. had a thriving, punk-informed underground comix scene back then; Groening’s peers included Love & Rockets creators Jaime and Gilbert Hernandez and future indie-comics titan (and Pee-wee’s Playhouse set designer) Gary Panter, whose work Groening published in the Reader. But it was Groening who broke out. A mordant Life in Hell strip about dying in Los Angeles got him a meeting with producer James L. Brooks, who was interested in turning Groening’s comics into a series of animated “bumpers” for The Tracey Ullman Show, which Brooks was developing for a fledgling network called Fox. Realizing at the last minute that if he took the deal, he’d lose the rights to the Hell cast (including the angst-ridden one-eared rabbit Bongo, his girlfriend Sheba, and fez-wearing nihilists/small-businessmen/gay life partners Akbar and Jeff), Groening scribbled out some new character designs while sitting in Brooks’s lobby — a family based on his parents, Homer and Margaret, and his sisters, Lisa and Maggie.

You know how that story ends, or doesn’t.

“Both projects help me cope with life,” Groening said in a 1995 interview. “I like The Simpsons because it’s a chance to hang around really funny people and I like going home and holing up in my studio and drawing my comic strip every week, too.”

At its peak — before the rise of Craigslist decimated alt-weeklies by bleeding away their classified-ad revenue, leaving them without discretionary income to spend on things like syndicated comic strips in which painful life-truths are conveyed by bucktoothed rabbits — Hell appeared every week in nearly 400 papers. When the final new installment ran on June 15, only 38 papers carried it, paying ACME Features a paltry $18 a strip for the privilege. Groening could afford to keep doing it because television and Butterfinger commercials and Otto the Bus Driver action figures made him richer than Mr. Burns and Hank Scorpio combined. But he also liked doing it. He told people that facing a deadline every week kept him grounded.

Groening, to an interviewer, sometime in 1986: “I’m bad, I procrastinate, I put things off. I sweat, I turn on the TV, I go for a walk, I think about something else I have to do … I think of a record I have to play — and then, I do my comic strip, the night before it’s due. One night, I did two strips. I thought, great — if I’m ever sick, I’m still ahead. Two weeks later I got sick. I’ve never caught up since.”

Groening, to an interviewer, sometime in 2008, when he was worth around $500 million: “There’s something wrong with me, because every week I go, ‘Oh no, it’s due again!’ Like it’s some big surprise.”

If you were inclined for some reason to do so — and willing to risk a visit from Social Services — you could expose a kid of impressionable age to Bukowski, Godard, Public Enemy, early Tom Wolfe, and Joseph Heller, and there’s a chance that kid would grow up to be an authority-questioning, iconoclastic adult, inoculated with the kind of cynicism that can protect your heart in a cynical world. But you’d probably just end up confusing the kid.

A comic strip about a weird-looking bunny, though — that’s the kind of thing a minor can metabolize, right away, ready or not.

As if it’s not obvious, I’m speaking from experience here: I had my first run-ins with Binky long before I met Bart and Homer, as a pathologically bored preteen snooping the bookshelves of cool adults or weird babysitters, all of whom seemed to own at least one (probably gag-gifted) “Mini-Jumbo Compendium” of Groening’s work. Usually it was Work Is Hell, a trove of cubicle-wall-ready office-drone satire so bleak it made Dilbert look like Dale Carnegie propaganda, or Love Is Hell, the one with the handy guide to “The 9 Types of Relationships” (they’re all terrible) and innumerable age-inappropriate jokes about love’s essential inability to fill the void inside us.

I had no business going anywhere near this stuff at 10 years old; I had no frame of reference within which to contextualize it, either. But I wanted to read it anyway, more than I wanted to read, I don’t know, Cervantes or Kathy Acker or whoever, because Life in Hell looked like a comic, and I liked comics. I figured comics were for me. This is the secret of comics, the one way they’re as dangerous as all those old dead public-morals guardians always said they were: The ones that really, really aren’t for kids are written in the same basic visual language as the ones that are. They hide in plain sight, looking all harmless and word-balloony, concealing world-upending conceptual payloads like a shiny Halloween apple full of LSD and razor blades.

I was also way too young to grasp the way Groening’s acrid social satire represented a departure from the head-shop high jinks of early underground comics. But I knew a thing or two about cartoons as subversion-delivery systems by then. I’d graduated from The Far Side and Calvin & Hobbes (pastoral, but sneakily anarchic — childhood by Charles Schultz via Terrence Malick) to Berkeley Breathed’s Bloom County, which turned me into the only kid in my sixth-grade class with a taste for Ed Meese jokes. But Life in Hell felt different.

It was the art that grabbed me first — I grew up snickering at Mad Magazine, too, so I liked Groening’s propensity to fill a tiny square of newsprint real estate with funny diagrams, checklists, flowcharts, OCD-ish boxes-within-boxes microjokes, magazine-cover parodies, and fake ads for shady ventures like Akbar & Jeff’s Cryonics Hut (“Large, Comfy Refrigerators Guarded by Vigilant Dogs Specially Trained Not to Lick Leaky Jars”). And eventually I’d get my hands on School Is Hell, which spoke more directly to my experience — Binky staring up from a trashed room at a looming silhouette representing parental disapproval, murmuring “Mistakes were made,” or writing “I must always remember to be cheerful and obedient” on a blackboard, prefiguring one of The Simpsons‘ longest-running gags.

But it was Groening’s pitch-dark take on adult life that kept me sneaking back. It went over my head and made me nervous in a way that made it seem vitally important, as if I’d intercepted some high-frequency transmission not meant for me, full of adult-world cheat codes and uncomfortable truths. It confirmed my growing suspicion that just about everything was total bullshit, including my own innocence.

Adults hated their jobs, felt bulldozed in their relationships, marinated in guilt and shame and despair, died unfulfilled, and were buried under self-loathing tombstones. And these things were so universal they weren’t even really unfair. Binky, to his one-eared son, Bongo: “You’re afraid there’s no heaven. But look on the bright side — there’s no hell, either. Except this one … No matter who you are, you gotta die. And we all get to be dead the same amount of time: forever.” I understood instinctively that these were ideas you weren’t supposed to joke about, and therefore that joking about them was a basic life skill I’d have to develop.

I became a Feisty Rock Critic and occasionally a Clever Film Critic. Life in Hell kept going. Groening started drawing more and more talking-heads strips about his sons Will and Abe saying the darndest things. It still wasn’t exactly The Family Circus, but I scoffed at it anyway, displaying a knee-jerk disdain for cuteness that’s at least partly Groening’s fault.

At least according to Amazon, most of the Hell books seem to be out of print, but they’re widely available used; here’s hoping responsible adults will continue to leave them lying around, where they can fall into the hands of kids who don’t yet know they need them.