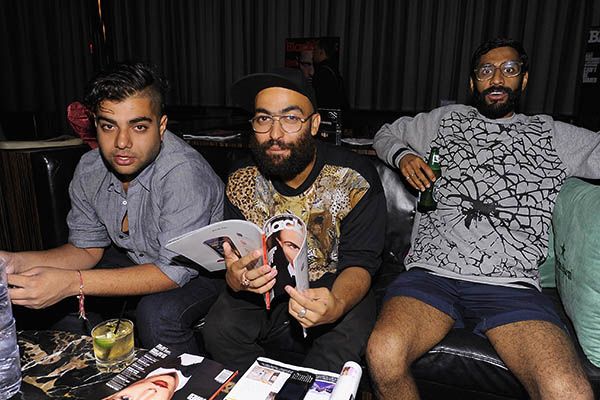 Das Racist broke up this weekend. You either:

They were that kind of band.

It went down on Friday, in Germany. During a solo set at Munich’s On3 Festival, a gig that was originally supposed to be a full Das Racist show, a grinning Heems delivered an announcement: “You guys wanna know a secret? I’m gonna do some Das Racist songs, but Das Racist is breaking up and we’re not a band anymore. Here we go.” Victor Vasquez, a.k.a. Kool A.D., followed that up by tweeting “for the record i quit das racist 2 months ago and was asked by our manager not to announce it yet. apparently @himanshu wanted to do it tho,” to which Heems replied “hah dag, my bad dont even remember saying that shit.” Speaking with Spin, DR’s Dapwell elaborated: “I was bummed when we actually broke up, when it was done, mostly because it was a way to make money really easily. Now, I probably won’t be able to make money that easily ever again. But we had a plan to break up around May. We had just signed this record deal and we were going to put out one proper album and then go on a farewell tour, release a proper breaking up statement that could have been really funny, maybe a weird, stupid video. Now, all of that has gone to shit.”

In 2009 Rob Harvilla did a pair of interviews with Das Racist for the Village Voice in which Heems and Victor turned on the full capacities of their smartass deadpan charm. Heems said stuff like, “All I wanted to do was make some jokes — mostly about race, though not necessarily consciously — over dance music that would serve to undermine it so Talib Kweli fans wouldn’t like it.” Victor said stuff like “Yum! Brands is the largest fast-food restaurant company in the world, with more than 36,000 restaurants in more than 100 territories worldwide … They own KFC, Pizza Hut, Taco Bell, Long John Silver’s, A&W, a restaurant I have never heard of called Wingstreet, and a Chinese food chain called Dong Fang Ji Bai, or East Dawning, a name taken from a poem written by 11th-century Chinese poet Su Shi, who (somewhat ironically) wrote incendiary poetry about the government’s monopoly on the salt industry” and “WHY ARE YOU VALIDATING THE FALSE DICHOTOMY OF JOKES VS. SERIOUS SHIT?” It was what they always did when at their best: get you, say, 97 percent convinced that they truly were passionate and committed and informed — and then, at least part of the way, pull the rug out.

The Village Voice interviews served notice of potential that Shut Up, Dude, the first Das Racist mixtape, fulfilled. But before that came out, in March of 2010, I caught Das Racist at a show in Williamsburg billed as a full set of covers of the Beastie Boys’ Paul’s Boutique. The parallels between the two acts were there — both traditional hip-hop outsiders, ethnically speaking; both hyper-referential; both not afraid of humor as a tool (the Beasties only did like a semester worth of college between the three of them, though) — and I remember being optimistic that this would be rad. And so when they came out and played the album off a laptop and danced around, I got legit upset.

Explaining themselves afterward, Vasquez wrote, “We discussed what it might’ve been like if in the days prior, we had each picked a Beastie Boy and dedicated ourselves to practicing his specific lyrics over the instrumentals and concluded that that would’ve been a boring and lame way of spending our time and that if we had to “do it all over again” we probably still would’ve been getting drunk and doing whip-its with that underage white girl at her parents’ summer home upstate all weekend. Naw, just playing. She was 19. So yeah, we played the Paul’s Boutique CD and fucked around on stage for its duration.”

Then Shut Up, Dude dropped, and was great, and so I promptly forgot all about the Paul’s Boutique situation and got right back on the DR bandwagon. I was working for Vulture at the time, and at one point I reached out to the band to annotate the verses they did over Ghostface’s “Nutmeg” beat (yes, like RapGenius!). After what I recall as an unnecessary amount of back and forth, I was forwarded a “Nutmeg” breakdown from Victor that didn’t so much provide what I’d requested as it did make a bunch of jokes about the author of All Quiet on the Western Front. I just dug through my inbox for it. Here’s a sample:

This is a reference to Erich Maria Remarque’s 1945 novel Arc de Triomphe, whose opening line translates as “Hey yo, that’s amazing, gun in your mouth talk. Verbal foul hawk, connect thoughts to make my man-child walk.”

German novelist Erich Maria Remarque used to cop all of his Snapple at Staples.

“My Dominican friend finna stab you.”

This means that my friend from the Dominican Republic is going to stab you.

I got upset, again, and we didn’t run it. Which is really too bad, because it was hilarious. Also, that line about “doing whip-its with that underage white girl at her parents’ summer home upstate all weekend” is more entertaining than any theoretical “Egg Man” cover would have been. Why was I so intent on validating the false dichotomy of jokes vs. serious shit?

As Stereogum points out, Das Racist, onetime supposed outsider Internet artists, ended up being threaded through this new New York rap scene: “They carved out for themselves a new place on the rap landscape, existing at the center of an ever-expanding circle of sharp and distinctive rap voices. At this point, their circle has expanded to the point where it includes El-P, Danny Brown, Roc Marciano, Action Bronson, Despot, Mr. Muthafuckin’ eXquire, Young L, Childish Gambino, Le1f, Lakutis, and a ton of others.” And it’s probably fair to say they’ve impacted more than one or two kids — kids who’d never seen anyone who looked like them rapping before — to go into the arts, or to at least explore an alternate path. As far as a “legacy,” though, maybe it was enough that they were good at messing with people. Confrontation for the sake of it is boring. Das Racist were confrontational in a subtler, slippier way; it was consistent and driven and shape-shifting. And that kind of stuff is really good — maybe even “important”? Keeps everyone on edge.

The odd little postscript here is that the dissolving of the band happened within a perfectly traditional rock-and-roll narrative. Back in 2009, Heems sounded earnestly excited to tell the Voice that, as a direct result of the popularity of “Combination Pizza Hut and Taco Bell,” “A couple of times, I got free soup dumplings.” Back then, these guys were probably pretty sure they’d just be doing this until it stopped being fun. But then DR went from getting free stuff to making actual money and, apparently, things got more complicated. (For what it’s worth, which is just about nothing: Victor being the first one to leave, but Heems being the one to announce it publicly, is how Lennon and McCartney did it, too!)

“We kinda checked out and it was just about money,” Dap told Spin. “Which some people can do, but apparently, we’re not good at doing things we don’t want to do anymore. It made everyone go crazy and get angry in such typical band fashion: guys arguing and then drinking. It’s just stupid. Because in the beginning, it was just us. We’d all hang out all the time, we all lived in this apartment together. Not that we were super friends, but sort of, you know? Really, it’s a huge opportunity squandered.”