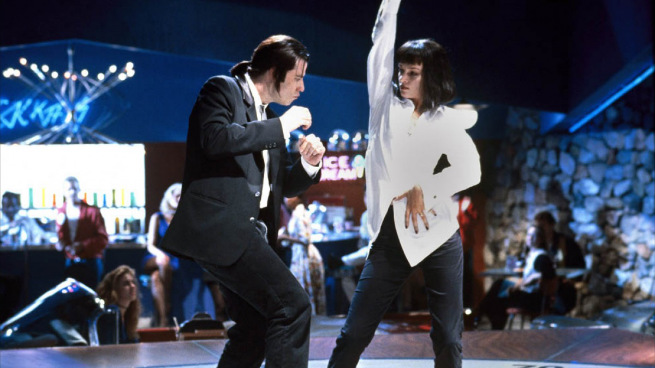 From K-Billy’s Super Sounds of the Seventies onward, the musical cues in Quentin Tarantino’s oeuvre have always been unmissable and unmistakable. (And they’ve made for some crazy-good albums.) Today, thanks to one Javier Virto, we’ve got a look back at all the big dances and set pieces that were built around one perfect song. You’ll be riding with a single tune the whole time — “Nobody But Me” by the Human Beinz, as seen in Kill Bill: Vol. 1 — but consider it a memory test.

That’s not the end of this week’s QT supercuts, either. The Internet has also received a four-minute compilation of every splattery death and grisly kill, set to the Delfonics’ “Didn’t I (Blow Your Mind This Time),” which you’ll remember from Jackie Brown/the thousands of times you’ve played the soundtrack on a mellow Saturday morning. Spoilers — and stomach-churners — abound, obvs.

If this happens to be your first time down the Tarantino supercut rabbit hole, there are plenty more out there. Like five and a half minutes of pop culture references:

Or 90 seconds of shots from below, like the popular trunk shot:

And, of course, all the times they say the W-word in Django Unchained:

Anyway. Call me when someone puts together all the food scenes.