Q&A: Vic Mensa on His Debut Album, Kanye, and Not Knowing What U2 Sounds Like 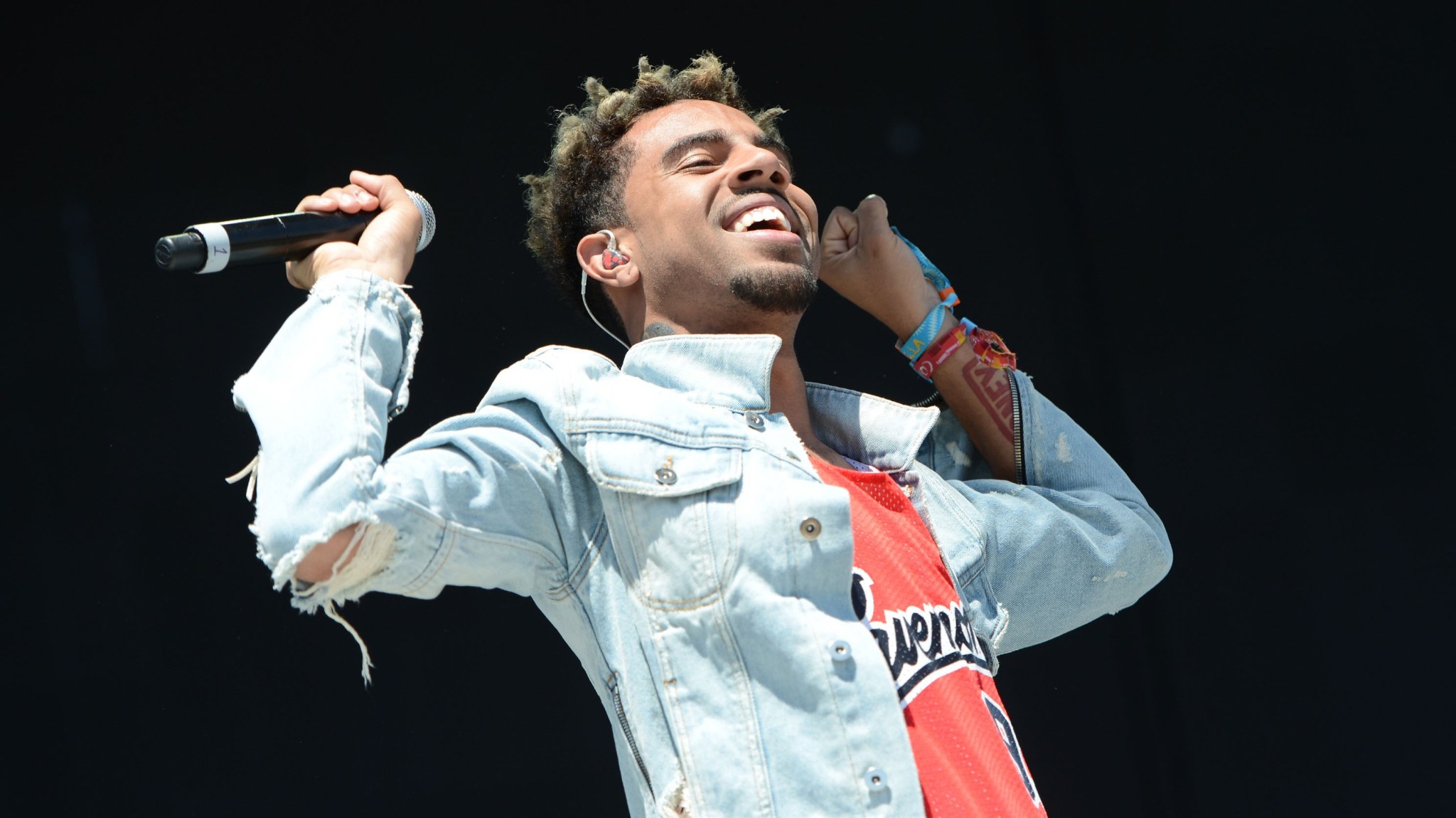 When I arrived to interview Vic Mensa at New York’s Pier 97, there was already a long line of preteens, three hours before the show. Admittedly, they were there because of the artist who was sharing the bill with Mensa — Iggy Azalea. But Mensa will probably be pulling similar crowds, and soon.

Mensa’s 2013 mixtape Innanetape was quietly one of the year’s better rap releases. In 2014, he dropped a string of pulsing songs increasingly influenced by Chicago house and dance music, especially club banger “Down on My Luck.” This year, he has worked extensively with Kanye (including an appearance on SNL‘s 40th-anniversary special) and signed to Roc Nation.

With single “U Mad” (featuring Kanye) leading the way for Mensa’s full-length debut, Traffic, the young Chicago rapper might have even more career upside than his fellow Save Money member Chance the Rapper, to whom he is often unfairly compared. More importantly, he has increasingly embraced a distinction of personality that might help him survive as a star.

In the dragging hours between the sound check and Vic’s opening set (during which he introduced hundreds of kids to the concept of threesomes), on an afternoon just months before his star really began to rise in earnest, I sat in a trailer with Mensa and talked through the transitions in his music, covering the White Stripes, and rap’s progression into classic rock.

Yeah, I was definitely taking it from some dance music. Not even so much that I was listening to a lot of dance music, but just vibing with it.

I’m really into AlunaGeorge’s music, though that isn’t necessarily dance music. I’ve been listening to, like, some Felix da Housecat stuff, a song called “Good Life” from the ’90s, might’ve been the ’80s. Honestly, though, I don’t really listen to that much music.

Click here for all of our interviews with fascinating people from the worlds of sports and pop culture.
Because I’m always listening to something I’m working on. It’s rare that I get on a plane and listen to a bunch of music. If I listen to something, it’s a song here or there to use as a reference, but most of the time the only thing coming in my eardrums are ideas I’ve worked on.

So you haven’t listened to anything new?

I hear shit, but nothing’s in rotation.

Well, that changes the direction of what I thought the album was going to sound like. Is that why you started covering “Seven Nation Army”?

I just love the song. What it comes down to, in my Gemini-scattered brain, I see so little distinction between things. We were just practicing for the Lollapalooza show, and we were thinking of a song that it would be cool to cover. And Stefan [Ponce] was going through “Down on My Luck,” he was going through his Serato, and I guess “Seven Nation Army” is just the closest tempo to “Down on My Luck,” and I love that song, and we just fucked around and tried it, and ended up going to the studio that night and kind of making our own version of it.

Innanetape covers a lot of different styles, almost like a calling card to show off all the different things you could do. Does any of that seem misguided now, or is there anything you don’t think you needed to do?

There’s nothing I feel like I’ve done that I shouldn’t have done. Like, that groove off “Lovely Day,” that’s something that I’ve seen surface in, like, that new Kendrick Lamar song. I think that song sounds, at least from its production, and kind of the hook of it, sounds a little bit like that vibe of Inannetape to me. Just, like, really groovy, funky. Traffic isn’t so much funk grooves, it’s more like rock grooves and hip-hop grooves, but I feel like all the shit there only pushed me to the places I’ve gotten to. Like, making “Run!” to me was a precursor to making “Down on My Luck.”

You said a lot of stuff that’s going to end up on the album is going to be political. What took up that mental space?

It’s not necessarily one point I’m trying to drive home with people. But I do think, even while being very personal, it’s important to me to see bigger than me, so I think that’s something that’s definitely represented on the music from Traffic. A lot of it is really graphically, blatantly personal shit, ups and downs. But I always try to — I was at the Wayne and Drake concert the other week, and they’re both dope as fuck, but I left the concert feeling like nothing happened there, nothing was said there, that was bigger than them. I just feel like what makes shit really special is when it’s more than you, when it’s colossal as you can be.

It makes sense that rappers are getting into a classic-rock phase where they can keep doing the same thing over and over. Aerosmith and Jay Z can put out an album every year and people will buy it.

Jay Z’s one of those guys, though, where he’s so smart that he never sounds old. There was a little bit of time where Jay sounded old, like around Kingdom Come, like occasionally he was sounding a little old. But he’s so ahead of everyone else, that Jay can have “N-​-​-​-​s in Paris” and be 40 years old. But Aerosmith, I don’t know. I don’t know what’s up with that U2 album they put on everyone’s phones.

Yeah, it showed up on my iTunes.

Like, if I wanted to listen to this U2 album, I would buy it.

I felt way invaded, but at first I didn’t think anything of it on my phone, because I don’t even know how to sync my phone to my computer. But then I saw a tweet, though, like, “That’s crazy.” They just showed the pictures that said that Apple put U2’s album on this many billion people’s phones, and said, “Check your shit right now.” I checked, and I was like “Damn, they really did put this shit on my phone.”

They had to make a button that would let you take it off your phone. They had no idea anyone would not want it. You’re stuck with it unless you download this app.

The U2 recall app. They should’ve had the U2 download app. Now I kind of want to listen to it, it’s come up in conversation so many times. That shit’s so funny. They spammed everybody. I don’t even know what U2 sounds like. What’s U2’s biggest song?

Recently? “Vertigo” was probably the biggest one when we were kids. The one in the iPod commercials where Bono is standing in the middle of the clickwheel?

I don’t know any of this shit. I feel like I should know what the fuck U2 sounds like. I wonder if they were any good back in the day. They’re way bigger than any single song they’ve ever made. I wonder if I was white, I would know it.

Well, if you had been to any bar mitzvahs, you would definitely know this one. [We listen to “Vertigo.”]

It seems like they got to a point where you transcend your art. It seems really cool, but also weird about the music. You’d have a lot of obligations.

Yeah. Having to do what people expect of you probably sucks, but it’s better than nobody giving a shit.

Yeah, it’d be cool if people were like, “Oh, there’s a new Vic Mensa album in my phone!”

I don’t think they do that with black people’s music, man.

Samsung did it with Magna Carta Holy Grail!

You had to download the app, though. You had to download it. If they put that Jay Z on like 3 billion people’s phones, motherfuckers would’ve been really pissed. With U2, people were just like, “Damn, how did this get here?” If that was a rap album, though …

That’s straight lawsuits. That’s got to be a lawsuit. If they ever just put a rap album on billions of people’s phones, someone’s getting sued.

The new Kanye abum showing up.

[He starts playing “Where the Streets Have No Name.”]

I get it. It’s tight, though. It’s tight, for sure. It’s what I would expect it to be. I just couldn’t really think of what any of this sounds like. This one sounds dope. This one’s got some Mexican flavor to it. I wish he were singing in Spanish. Bilingual. Man, I love music. I just don’t have time to listen to it.

You’re not going to listen to anything new when Traffic comes out?

I’ll listen to Kanye. That’s all I listen to.

I’ll listen to the new album when it comes out. I didn’t really listen to Yeezus for a while, though, because when it first leaked I was in L.A., driving around, it was so sunny, and I was tripping on mushrooms. And I was like “Cut. Hell no, I am not in a state of mind to listen to this devil music.” I think that shit’s awesome. But when I heard it, though, I was like, not down. Way not down.