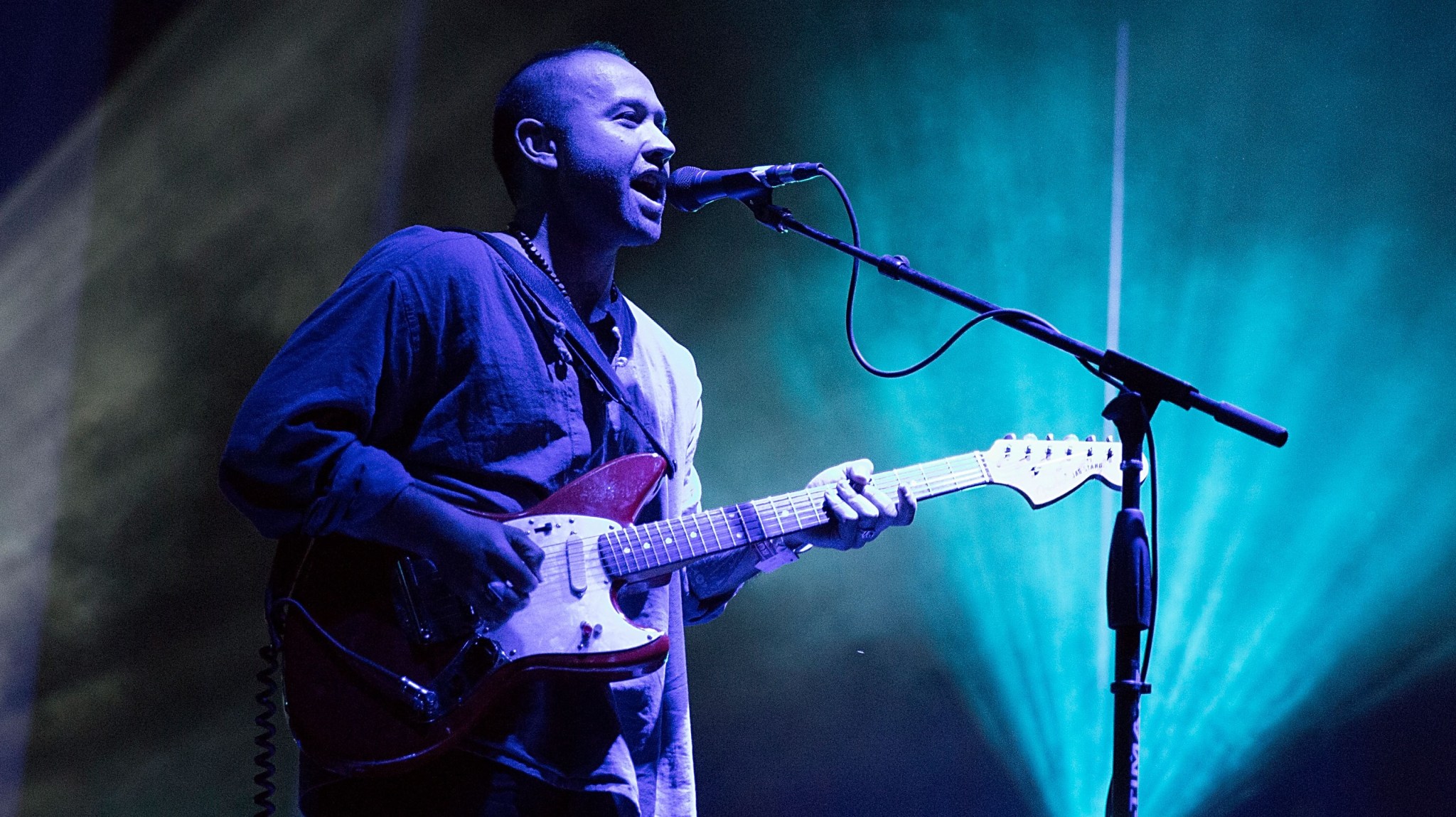 Today, Unknown Mortal Orchestra releases its third album, Multi-Love. On this go-around, the psychedelic pop outfit brings in more R&B and disco, enlivening their sound after the stripped-down desperation of 2013’s II. There’s an ecstasy to many of the songs, but also a sense that the feeling could, and probably will, crumble away.

At the center of Unknown Mortal Orchestra is Ruban Nielson, a musician raised in New Zealand who has been living in Portland, Oregon, and started the group as a pseudonymous solo project in 2010. Like previous UMO efforts, Multi-Love was recorded and obsessively tinkered with by Nielson in his basement home studio. While II was made when Nielson was raw in his recovery from a stretch of drug abuse, a recent feature on Pitchfork revealed that the inspiration behind Multi-Love’s songs was a polyamorous relationship that Nielson and his wife, Jenny (also the mother of his two children), began with a woman he met in Tokyo while on tour and who then came to live with them, before a visa issue forced their separation.

Last week Nielson spoke over the phone, after a soundcheck for the band’s show in Liverpool, about the looming influences that shaped Multi-Love, and why such an anxious person would make his private life so public.

Can we talk about Prince?

Yeah. I love talking about Prince.

I’ve felt his presence in your music before, but it’s even greater on this album.

Obviously, he’s a genius. He’s always been a musician that I thought of as one of the gold-standard people in terms of talent and scope of his work. When I got into music, I was a visual artist and I went to art school and all that stuff. When I started making music, I felt a bit like a tourist, more like a music fan than a musician. That’s really important to me, to think from a music fan’s perspective and protect that music fan side, because I know that some musicians get so deep into music and making music that it takes some of the joy out of listening to music. I protect that quite a lot, more than I would protect my privacy. I make sure no one ruins music for me. Why I say that is that the idea of openly being influenced by Prince seemed blasphemous or something, or even pretentious. To even pretend that I could aspire to even be influenced by him seemed wrong. Now that I’m a little bit older and more experienced, it seemed sort of inevitable.

I’ve been studying him quite a bit, because it’s hard to find information. He’s not the kind of person you can go down a YouTube rabbit hole with for very long; he’s not like Bowie, where you can watch all of the historical interviews or whatever. I found this book called Prince in the Studio (1975-1995), which was really amazing and really full of good information. It ended up being a really big influence on me, because Prince’s whole approach in the studio was to just get ideas down and not worry about a lot of things. It was all inspiration. Since I’m so into working on sounds, it was a healthy thing to read, just to make sure I keep a balance and not worry too much about overemphasizing the specific sounds.

You recorded this one in your studio in your basement, but have you ever thought about not doing it yourself?

I think about that all the time, actually. I’ve been trying to branch out. I can make a record by myself, but making records with other people is a process that I’m learning. That was another thing about Prince that was cool — learning that he never does vocals with anyone else around. He just has a microphone hanging over the console. I don’t know if he still does that now. He’s embarrassed or shy to be doing his vocals in front of people, and that was cool, because I’m embarrassed to do that in front of people sometimes. It gave me permission to be OK with that idea of needing to do stuff by myself.

But at the same time, I want to get better with doing things more quickly and collaborating with people, and even just sharing the credit of what I’m doing with other people and sharing any success that comes. One thing about doing things by yourself is that it’s kind of lonely to win by yourself. If anything good happens, you end up sitting there going, “Yeah, me.” The idea of collaborating so you can have a small group of people that you’ve worked with that you can share your success with is appealing. I collaborated with my brother [Kody Nielson] quite a bit on Multi-Love, and it was a really nice process. I did some collaboration with my dad [a jazz musician in New Zealand] and Jake Portrait, the bass player in my band. It has happened quite slowly, but I do think about it.

Do you even have room in your basement for other people to come down there?

Kind of. The other day I had someone who was working on his music in my basement and it was a little cramped. Also, my setup is so weird since I taught myself how to do all the recording stuff. I never learned the correct way to set up patching and all of the stuff that people do when recording. The way I do Pro Tools is really unprofessional as well. It’s weird to work with people because they have no idea what I’m doing. I’m plugging stuff into other stuff and it just looks like chaos.

You said you’re trying to be less obsessive over your songs, but you obviously put a lot of thought into them. Is releasing them nerve-racking or freeing?

It’s both, in a way. The idea that somebody might enjoy them is really amazing, but I have this background radiation of anxiety. That’s what every musician experiences — or anyone making anything. The worst fear is not that you’re going to make something bad and everyone is going to hate it. The worst fear is that you’ll make something good and people won’t get it. That’s the most heartbreaking thing.

I get blinders when I’m making the music. I get really obsessed with making it the best thing that I can make it, then later I get this anxiety. I really don’t care what anyone thinks about me. My whole process is that I’m a human being going through life and trying to figure it out. If anyone is going to judge me for just going through my life, then so be it. Sometimes I worry about what I did wrong or what mistakes I made, because I make mistakes. Then I write them all in my songs. I don’t talk about the good things that happen, I usually talk about the things I was struggling with and the painful parts. Usually something good isn’t worth writing about unless it was extraordinary in some way. I don’t usually write songs that are specifically about being happy. I don’t know, maybe I should try, but it’s not what comes into my head when I’m writing.

Do you need that emotional fragility to write?

I just am emotionally fragile. I need music to put some dignity and mythology into the way I just bumble through life.

So it’s not like you seek out hard situations that will make for good songwriting material?

I have been thinking about that a lot lately. If I wasn’t a musician, I would run away from a lot of situations that I let myself get into. It just makes me braver in life, generally, because I know I can use music to make it make sense. If I didn’t have music, all these things would be going on and I’d just be confused and living life.